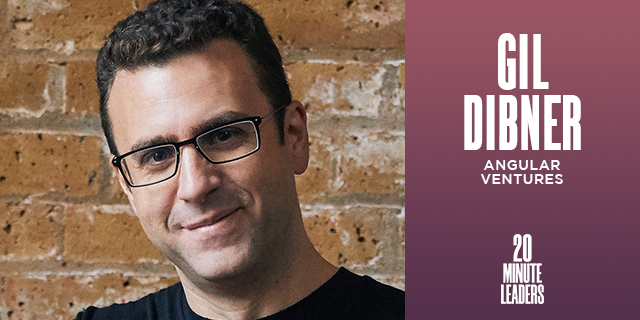 Gil Dibner, founder and general partner at Angular Ventures talks to Michael Matias a and shares advice on how best to manage relationships with entrepreneurs

Unlike many college applicants, Gil Dibner had a very good idea of what he wanted to do with his career. He has followed the path he set out in his admission essay by becoming a venture capitalist in Israel and Europe and founding Angular Ventures. Though he felt like an outsider at first, his love for innovation spurred him on, and now he helps early stage entrepreneurs accomplish their goals. HIn an interviw with 20MinuteLeaders creator Michael Matias, he says that funding comes much easier now than when he got started, but that actually poses dangers to founders. Dibner’s advice for young entrepreneurs is to be intellectually honest with everyone on their journey and look beyond massive funding to what’s best for the company in the long run.

You’re working to build category leaders, so before we even talk about you and your life, what is a category leader and why is that sort of the mindset you bring to investment?

It suggests that you want a really large outcome; you want to define the category. I think that’s an indication of scale. I think what is important for founders, even at the earliest stages, is to try to have some kind of thesis about how do you think your category is going to evolve, what do you think are going to be the driving forces that will make a company successful, what is the leader in that category going to look like, and what are we doing today that gets us there. I think that framing is helpful to remind ourselves and founders of what we’re trying to do here. We’re feeling our way through the dark to try to define categories. Sometimes you’re not defining a new category, you’re just displacing an existing one. But it’s important to know what the playing field is.

As an early stage investor, it’s not like you’re talking to companies that have years of experience necessarily. How do you actually go about finding those right people that could eventually become category leaders as people, not just as their product?

Sometimes we’ve been lucky to back one or two second-time founders. In many cases, we have founders that have tremendous domain expertise. In other words, they haven’t built a software company to dominate the category, but they understand their industry supremely well. I think that deep domain expertise is a huge issue, a huge secret weapon. We have a company, for example, in oil and gas and the CEO worked in that industry for many years and said, “I’ve been a customer of all the terrible software tools that exist, and I have a vision for what it would have to look like to succeed, so I am going to build a company based on that set of insights.”

That’s a great segue. I have to take you back to your college days when you were working on an oil tanker in the Gulf of Mexico. What was that about?

My dad’s father had sent him to work as a construction worker in high school in the summer to understand what real work was. My dad wanted me to have a real work experience as well, so in the summer after my freshman year, he suggested to me that instead of taking an internship where I could put on a suit and tie and pretend to do something, I could work on an oil tanker. It was stinky and horrible, but it was fantastic, the best time of my life. Nothing since then has felt like work, so it was an education.

Very different experience than what a lot of your Harvard classmates experienced at that time.

I was super proud of myself. I thought I had discovered the secret to life. I was going to be the next Hemmingway; that was my plan.

Walk me through a little of your journey. You’re going to Harvard studying economics, then to Wharton. Do you know that you’re destined to support early stage entrepreneurs along their careers?

I think I am probably the most boring VC story of anyone. I wrote my college admission essay about how I wanted to be a VC in Israel when I was 18. I think I pretty much had this figured out. I really like the idea of innovation and technology, and I had sort of figured out that I was not smart enough to do this innovation myself. The closest I can get is to find a way to have these people want to hang out with me. The business seemed like a logical way to do that.

How do you translate that interest going through Harvard and Wharton and then working with the Israeli and European ecosystems? Why those ecosystems?

The Israel thing for me was always a goal. I’d always wanted to live in Israel. It’s the place I feel most at home. It’s my identity. My mother’s Israeli; I grew up in both countries. The goal was to be part of the Israeli technology landscape, but when I got there, I pretty quickly realized that I found myself an outsider.

It was also a very different environment; today, for better or for worse, the default is everyone gets funded. Then the default was no one got funded. When there was literally no money, these people were crazy. These people were seriously committed to what they were doing. They were really passionate about building something from nothing in their domain.

How we provide value as a firm comes from the roots of being specialists, being nimble. We have a very strong network. What we’re trying to do as a firm is relatively unique in the sense that we’re specialists. We’re doing very selective deal making on a very large pool, and we’re narrowing down super efficiently. We have a wonderful network of people who help us with diligence. We have what we call advisory partners or venture partners. For example, the best US immigration attorney is a venture partner. We have people that are not necessarily the most famous people in the universe, but I know them, I’ve worked with them for years. We can deliver that value in real time in a meaningful way.

What are two or three nuggets you can share that young entrepreneurs should keep in mind as they move forward?

I would give two pieces of advice. One, take a long view of your business, take a long view of your relationships with investors, with co-founders, with employees, even with customers. That’s a super important perspective that a lot of founders, particularly in today’s climate, are missing out on. The second thing, being intellectually honest with yourself and having real intellectual intimacy with your investors about what is it we’re here to do, how much money do we really need, what’s really unique about our company, what do we know, what do we not know, how are we going to de-risk this thing. Those are things that I think are often getting forgotten in the quest. It is almost easier to raise money with nothing than with something. If you’ve got something, people start judging you, but if you’ve got nothing, you just have stories and you can raise a ton of money. I think that can become a treadmill to destruction very quickly, actually, unless people are really honest with themselves and each other.

Intellectual honesty, resiliency, relentless. What founders notice when they work with me is when I am out there fighting for them, I’m not going to give up, and I think they see that. I think when I disagree with them about something or feel I need to call their attention to something, I’m not going to sugarcoat it. It’s much better to argue. That’s one of the things I learned in Israeli venture where they would just argue all day long, and it was amazing. You knew you heard every opinion in the room; you knew where everybody stood. There was no mystery.