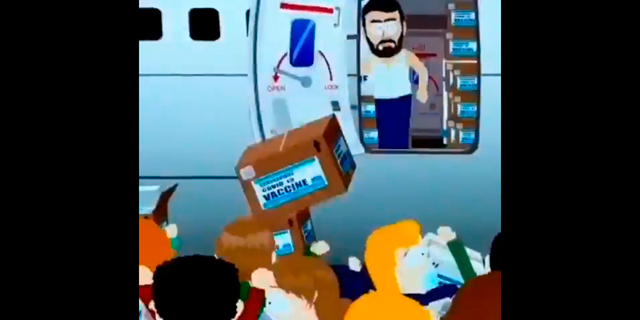 Israel’s successful vaccination campaign has reached the pop-culture world, earning it, not one, but two references on the hit animated comedy South Park. In the latest episode of the long-running series which aired on Wednesday night, vaccine-rich Israel is both admired for its ability to obtain the coveted Covid-19 inoculations and, in classic South Park style, jabbed for its closed border policies. In the first scene, a crowd of mask-wearing South Park residents is seen standing in line to enter a store with a security person refusing them entrance due to Covid-19 limitations. One of the characters complains that it’s ridiculous that they’re not allowed in and that “In Israel, they vaccinate everybody. Israel is way cooler than this lame place.” The bouncer responds “Then go to Israel,” to which the first character says defeatedly “I tried, but I couldn’t get in.”

In the second reference later in the episode, an “Air Israel” plane with a star of David on its tail, arrives to hand out vaccines to everyone. A muscular, tank-top-wearing man with a beard starts throwing out boxes of vaccine doses to all the adults in town who proceed to shoot themselves up.

Hey @nbcsnl: this is how you do pandemic humor when it comes to Israel. Watch and learn from @SouthPark pic.twitter.com/miMAS0dwry

Israel’s ambassador to the U.S. Gilad Erdan tweeted a clip of the show, tagging NBC’s Saturday Night Live and writing “Hey @nbcsnl: this is how you do pandemic humor when it comes to Israel. Watch and learn from @SouthPark” In late February, Erdan accused the show of being antisemitic for saying in a comedic news segment that Israel was only issuing vaccines to its Jewish citizens.

.@nbcsnl I’m a big fan of humor but, perpetuating antisemitism is just not funny. Your “joke” is ignorant-the fact is that the success of our vaccination drive is exactly because every citizen of Israel - Jewish, Muslim, Christian-is entitled it. Apologize!pic.twitter.com/zQqtBmFqJ2