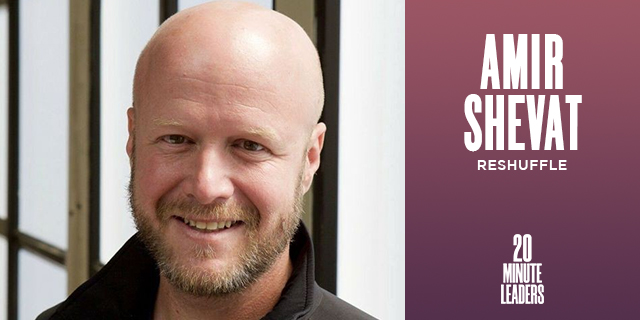 “I don’t want to find people who are at my level. I want to raise the bar"

Amir Shevat, CPO and co-founder at Reshuffle, talks to Michael Matias about his career shift from product manager to investor

From Microsoft to Google to Slack, Amir Shevat, CPO and co-founder of Reshuffle, has worked at some of the largest and most successful organizations in the tech world. As Shevat explains, each of these corporate companies has a unique set of values that are abided by, and while these principles do change over time, workflow is best when a company’s mission and goals are explicitly known by employers and employees alike. More recently, Shevat has transitioned into the investment sector, where he collaborates with founders who are excited, intelligent, and able to execute. Shevat notes that startups are all about the people and that without awesome people there cannot be an awesome company. Shevat has amassed a great deal of experience throughout his career, and whether it be engineering, investing, or running his own company, he certainly has the tools and expertise to set himself up for success.

Amir, what are you? Are you an entrepreneur? A product manager? An engineer?

I'm an engineer by trade, but now I do more products. I've done about 15 years in corporate companies, building developer platforms and working with developers on developer platforms. Now, I've retired to the startup life and do investments while co-founding my own startup.

How many years have you worked in deep tech, products, and consumers?

How do you not develop some sort of cynicism after 21 years to all these different initiatives? How do you remain excited?

Because you see success. Think of when people tried to fly. For a very long time, people dreamt of flying, but we didn't see any success. If we were to say, “Okay, man can’t fly; that’s it,” then we wouldn’t be having the experiences that we have today. It's very different in the tech world because you see success and you see it happening very fast. I think we're at a unique moment in history where we can easily move from ideation to implementation and success. That means you can lower your cynicism because cynicism is a tool that helps you judge whether an idea is good or not. But once you have this rapid development, you don't need to judge and you can see for yourself. If I hear something that I think is a bad idea, I don't necessarily want to tell that person that it's a bad idea because they might need to learn or I might be wrong. So, I remove judgment and let reality be the best judge of everything.

Do these big corporations operate the same way? With a hundred thousand employees, you would imagine they would converge to similar best practices, right?

There are things that are similar. For example, Facebook and Google are very similar in their hiring process, and promotion is done in a very similar way between Facebook and Amazon. However, every company has a very, very unique aspect that makes its DNA different. At Google, promotions are done by committee. I used to work on one of those committees. We would get a book that explained why a person should be promoted, and we would have a discussion for a few hours to decide if the person would be promoted or not. Promotions were not done by a manager but by your peers, so it was a very unique process. At Amazon, decision making processes were very, very unique because you only needed to get one person's approval. The company was optimized for rapid decision-making and rapid execution. Facebook is famous for their policy of “move fast and break things,” which is very, very different from Google, who does not break things. Another interesting thing that differs between companies is the strength of certain sectors. At Google, engineering is very strong, so when I wanted to change something in Gmail because it didn’t look the way I wanted it, I had to go and find the engineer who was working on the project. At Slack, designers are very strong, so everything needs to look and feel amazing.

Let's fast forward four years into the future. Reshuffle is a thousand-person company. What does Reshuffle look like with a thousand people? What are some of the most crucial items that you take and you forego?

I think that the most important thing entrepreneurs need to do is solidify the DNA of their company. What does that mean? Usually, good entrepreneurs start by writing the principles of their company. What are the core principles, and how can you keep the DNA of the company growing? For example, at Slack, we were doubling in size every two weeks, so every two weeks we hired the number of people who were currently working at the company. How do you ensure that the new people have the same experience and same virtues as the company? We worked with them and trained them to make sure that they knew and understood what it meant to work at Slack. What I hope to have Reshuffle be is an amazing place to work at—a place where people can collaborate, be creative, and feel empowered. Every time I think about a company and how to become successful, I think about the core tenets that the company has. It is never too early to start outlining that.

Now you are an entrepreneur and you're an investor at the same time. Do you need to have a double personality for that? How do you differentiate between these roles?

Yeah, it's pretty hard because as a founder, you need to have a lot of excitement, but as an investor, you need to have a little bit of skepticism. What I found is that you need to develop a certain thesis in order to think about investing, and the thesis that I had is how can I find founders that I know are able to execute well. I know that the company I'm currently investing in will not be the same company at the end because people pivot, people change, and companies change. What I'm looking for is can the entrepreneur handle change? Can they see that reality has changed, and do they know what to do in order to find a better product market fit? I invest more in people than in companies because at the end of the day, your startup is nothing without awesome people that make it awesome. One thing that people don't realize is that opening a startup is a seven-year deal. People think they’re going to make money and then I move, but as a founder, you're there for five and seven years until you're successful. You need to make sure that the people around you are amazing and that you really like working with them.

Do you often see that you're looking for yourself in the founders or you're comparing your own passion to theirs because you're going through the same process at the same time?

What are some of the pitfalls of product management? Where do people go wrong? What are the weirdest things that people don't understand?

The weirdest, most common thing I see is called ivory tower syndrome, which is when you sit on your freaking ivory tower, you say this will be what's good for the masses, and you're totally disconnected from your actual audience. The most common problem that entrepreneurs and product managers hit is indifference. People see the products, they don't understand them, and they move on. You also need to have empathy for your customers; you need to understand your customers, and you need to know exactly what their needs are. Then, you need to validate your assumptions, because 90 percent of your assumptions are wrong. Even Steve Jobs, a very insightful person who we all recognize as a great product leader, has had multiple assumptions that were wrong. So the most common pitfall for a PM is to have strong opinions that are strongly held. You have to have strong opinions that are weakly held and be willing to be proven wrong because then you can change your thought process and make the product better.

What can I do as a product manager or as a CEO so that I empathize with the people that I'm building my product for?

That's a great question. If you look at companies that have done radical things around building empathy for their customers, they have been very successful. For example, Facebook has shipped their entire team to India or Africa to build their mobile app. If you're on 4G, it’s not a problem to develop a rich mobile app, but if you try to build a mobile app for developing countries with low or no bandwidth, that gives perspective. I would say that if you’re trying to build something for developing countries where there's a water shortage, spend time there and actually feel what it is like to be there. The other thing is interviews. People don't do enough interviews. I would say, as a rule of thumb, you need to interview different types of customers at least once a week.

Before we go, I need three words that describe you.