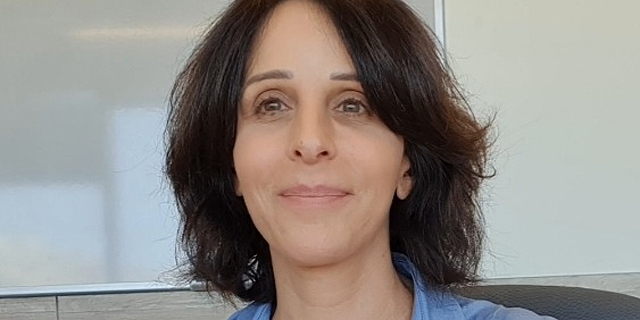 On the heels of International Women’s Day, Intel-Israel and Supersonas are developing an artificial intelligence platform, termed AI for Women, which is based on female intuition. After collecting data and advice from thousands of successful and high-achieving women in the public and private sectors, the AI platform aims to gain insight from important tips gleaned from older professional women that can help young women at the beginning of their career-paths. As part of the project, Intel has collected thousands of tips from successful Israeli women who have been influential in their sectors, and distilled it into an advanced model database of artificial intelligence filled with collective cognitive wisdom. Some of the data gathered has been given by leading figures in Israeli society such as Yamina MK and former Minister of Justice Ayelet Shaked, former columnist Emily Amroussi, Yeruham Mayor Tal Ohana, Prof. Galia Rahav, Director of the Infectious Diseases Unit at Sheba Hospital, Efrat Duvdevani, CEO of the Peres Center for Peace and Innovation, and Yesh Atid MK and former Minister of Social Equality Meirav Cohen, among others. 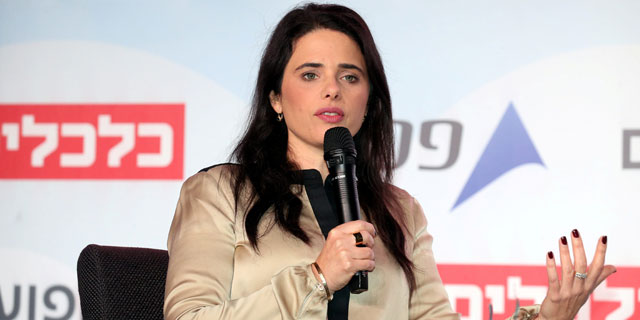 Former Justice Minister and Yamina MK Ayelet Shaked speaks during a Calcalist conference, and was one of the women who added her insights to the database. Photo: Yariv Katz

Bella Abrahams, Public Affairs Director at Intel-Israel, is the woman behind setting up the AI for Women initiative. “If we want to bring about real change, we must work together,” Abrahams said in a company video, along with other leading women. “We have a moral responsibility as successful women to help other women succeed,” said Hana Rado, who is founder and President of Supersonas, an Israeli organization which promotes equitable female presence in Israel and is leading the project. On their website (in Hebrew), women can upload their own tips to help others. The AI platform then studies women’s behavioral patterns based on the advice and tips they have provided, and draws its own conclusions, lending it a female “voice.” Ayelet Bar, who leads Intel-Israel’s Women’s Forum and is also Engineering Manager at the company’s Processors Development Center, spoke to CTech about how Intel-Israel aims to promote women locally and globally. “The feedback obtained and stored in the database includes tips from high-profile women who have relayed their experience and lessons learned early-on in their careers, and want to pass it along to the next generation,” Bar said. Their message was one and the same: they don’t want young women to feel held back by their careers, make the same mistakes, or feel unprepared for the journey ahead.

The tips encourage women to take responsibility for their careers, and helps them deal with unconscious messages of occasional chauvinism in workplace environments, she noted. They also help women who are confronting the increasingly arduous quandary of how to simultaneously balance a career and a personal life.

Bar relayed her own personal advice that she has added to the system. “Make sure you’re vocal and know what you want. State it. Don’t be afraid to speak your mind. Be independent. I don’t think young women should count on male managers to drive their careers, promote them, or transfer them to a different team or project. Women are too polite sometimes, and don’t state explicitly what they want. They often wait for opportunities, but they should just go for them,” she said. In addition, when it comes to starting a family, having another child, or navigating the work-life balance, women shouldn’t try to balance their personal life based on where their company is at. “You can’t align your personal plans with your career plans. I know that it’s hard, but you just have to go for it altogether. A lot of the women in several different industries, not only at Intel, told me that there is an increasing amount of flexibility to incorporate both aspects these days,” she said. It’s a bit like science fiction Rado, whose company collaborated with Intel on the project, noted that it’s important to promote women who are more influential in society to encourage the younger generation. “I think that this project, which relies on advice given by the highest-level of decision makers in Israel, will greatly benefit society as a whole,” Rado told CTech. “Our artificial intelligence is built on the insights that these women have provided,” she noted, and mentioned a particularly noteworthy figure who added her tips to the database as well, Yeruham Mayor Tal Ohana, who serves as the only female mayor across the entire southern Negev region. While originally Ohana felt out of place presenting her initiatives in front of only men, once she did, she discovered that they all supported her. “Her main message was: don’t manage tasks, manage people,” Rado explained. “I joined this project because I think it's an amazing step forward for women in general, and it’s also a bit like science fiction making this become reality.” 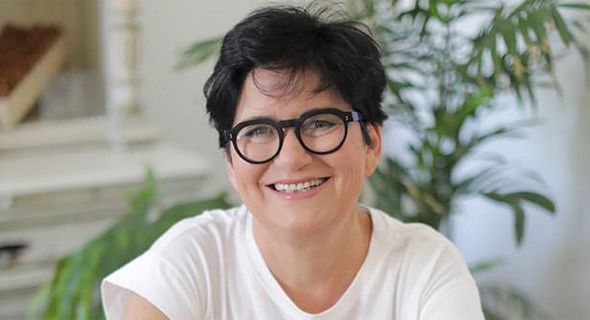 So far, the project contains advice from some 3,500 women, but aims to have 5,000 women, and potentially even 30,000. “Most of the professional women I’ve spoken to told me that fear inhibits their ability to make decisions, and we aren’t yet aware of how dangerous that is. I want younger women to be less afraid, feel free to look for new opportunities, and look forward to every door that opens for them professionally,” added Rado. The company’s AI platform uses all three methods of processing such information, “teaches” the AI module, and refines its database repeatedly, ensuring that it reaches and is adapted for the right audience. It is being led by Shira Guskin, a deep learning software engineer at Intel Labs. Some of those tips gleaned from the database include investing in career development and marking long-term goals (38%), having self-confidence and fearlessness, believing in oneself and knowing one’s value (23%), creating a support network, having mentors, and collaborating with colleagues (20%), doing your work with love and loving the people you work with (10%), and trusting your gut feeling or intuition, as well as not trying to silence emotions (9%). 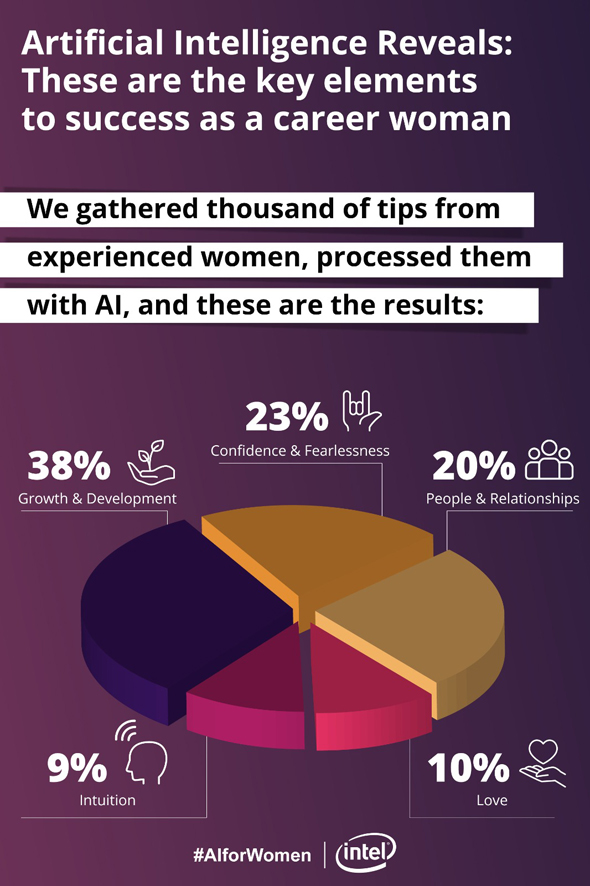 Some of the tips gathered by the women were divided into the following categories and will be added to the AI platform. Photo: Intel-Israel

For Intel-Israel, diversity is more than just a goal The tech giant’s programs are open to all female employees free of charge. Prior to International Women’s Day, the company held a weeklong event filled with lectures and female mentorship initiatives. At Intel-Israel alone, there are 40 employees who direct such programs, and some 200 participants. Those programs are for women at all levels, whether they recently joined, serve in technical positions, or are at mid-or senior-level management. “Intel Corp. takes a very aggressive role when it comes to diversity,” Bar said. According to current statistics, women in technical positions stand at only 20%, but Intel has set its global target to reach 40% by 2030. One of the main challenges is to grow the academia-industry pipeline, Bar explained. Intel-Israel is involved in many volunteering programs at universities that help mentor female students, encourage them, and help them enter the industry. “We do a pretty good job at providing both the infrastructure as well as encouraging diversity in the environment.” Intel-Israel’s female-to-male ratio is similar to that across the U.S., she noted. As for her message for young professional women, Bar relayed: “I think that taking responsibility for your career is important. I also encourage women in my team to be very clear about where they want to be in a few years, and don’t wait for it to happen or for the way to be paved, just do it.”