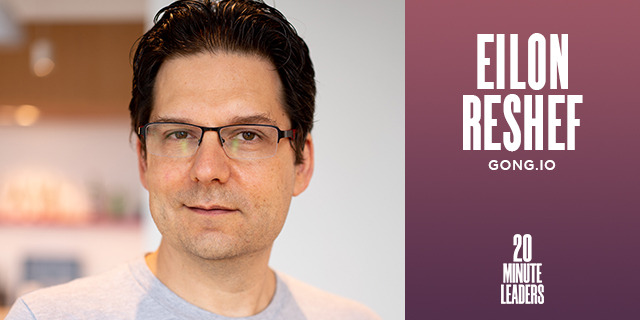 “If you hire smart people, you don’t have to do that much because other people do the smart things"

You might assume that the chief product officer for a growing startup is overworked and stressed, but Eilon Reshef, who also co-founded Gong, isn’t. He believes in hard work, but he warns that pacing yourself for the marathon of starting a company is also key. He sets priorities and doesn’t feel bad if he doesn’t get to the end of his list each day. Reshef says another crucial part of keeping stress low is hiring the right people to work with you. The teams at Gong are organized into squads that are fairly self-sufficient as they work to fill a gap in the sales world. They started out with a narrow focus but are expanding with the goal of becoming the new operating system for B2B selling.

Eilon, tell me about your journey a little bit.

I started as a young kid in development and had my own small business developing software. I did a little bit of programming in my military service. I worked for a public company, Magic Software Enterprises, which was the first Israeli software company to go public on the NASDAQ. I then went to a small startup. Then I started my own company, Webcollage. After we sold it in 2013, I took a sabbatical and then started Gong with my partner Amit.

You’re an engineer by profession, but you have been VP product, chief product officer, and chief technology officer. Can you talk to me a little bit about how these roles play together?

It’s very common for engineers to eventually become product managers. I moved to New York and became a real product manager. I had stayed close to technology because it was a hobby for me, and the CEO of my previous company asked me to try being head of engineering. It ended up that I could manage people. When we started Gong, I told my partner Amit, “I actually want to do product.” He said, “No, why don’t you start the code.” I ended up writing the whole prototype with just one other person. At some stage, we said, “Let's find someone who’s more professional at managing engineering innovations.” I just focus on product, which is fun.

You write on your LinkedIn you were a wannabe founder for four months as you were validating your sales idea. What were those four months like?

First, I took a whole sabbatical off, and I recommend it to anybody and everybody. I originally met Amit when he was trying to recruit me to SiSense, but it was a very short conversation. When he left SiSense to start a company, we got back together. I was 100% sure there was a need in the market. The thing that excited me was there were so few sales tools out there. I think we underestimated at the time how big the gap was.

If you look at every sales organization in the world, what people do is most of the time they communicate with customers: emails, phone conversations, videos, text messages, whatever. All of this conversation essentially goes to the garbage; nobody can ever find it. There is literally no way for any company on earth to understand what people are really doing. As we probe deeper, it is evident the gap is huge.

I’m guessing, in terms of the vision, you’re still just scratching the surface of what’s possible.

It’s scratching the surface in terms of number of salespeople and capabilities. We’ve got maybe 100,000 people, but there’s probably tens of millions. For capabilities, we’re helping with coaching, helping with pipeline management. We’re maybe 10 to 20% of where we could be in two to three years. 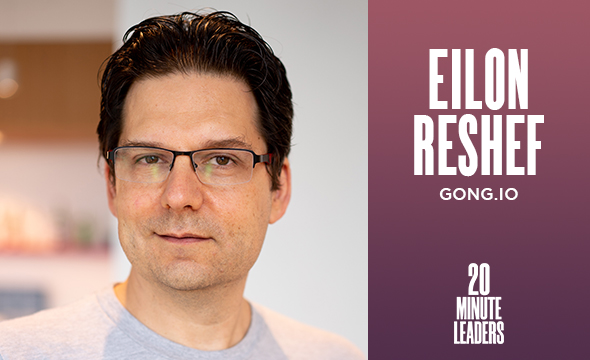 Selling to sales: I’ve heard it’s not that easy. How was selling Gong to the very first customers?

First customers are never easy. People underestimate focus. When we started, we were only going to sell to software companies, B2B in North America who sell over videoconferencing, which in 2015 wasn’t that popular. I think that allows us to really focus on the key value proposition. That core message hasn’t changed, but we obviously built many more applications.

Talk to me a little bit about how sales has changed since we introduced digital communication and in Covid-19 times.

I think what Covid-19 did has really accelerated everything five to 10 years. If you rewind 15 years ago, most B2B selling was done in person. You’d take a plane and in two days have one meeting, maybe two. It’s gradually shifted toward a digital setting. Many people thought we can only close $10K deals (on the phone), but in the last year, people have been closing seven-figure deals over the phone because there’s no other method. I think when people get used to this, there’s no going back. People are still going to meet, of course, but they're not going to take a plane for a one-hour meeting. Relationships are still important. People are going to go back to having dinners and lunches, but maybe 30% of the time versus 90% of the time.

Do you find your position as chief product officer has changed as Gong is growing? Are your priorities different?

I think there’s two things. Tactically when Covid-19 started, we launched a couple of very nice Covid-19 centered features. Strategically what’s changed isn’t due to Covid-19, just our growth and the footprint of us as a suite of products. It kind of broadens what my role is and the product role is in general, which is inserting new value areas where we can become the new operating system for B2B selling in a couple of years.

There is one chief product officer, and you have 24 hours in the day. How do you continue prioritizing? I assume you are working most of those hours.

I don’t believe in hard work, like over-hard work. You want to run marathons, not sprints. You always want, as a startup, to hire smart people. If you hire smart people, you don’t have to do that much because other people do the smart things. The way we organize our teams, every PM and group of engineers work together almost as their own startup. As leadership, we don’t have to interfere so much. Personally, I don’t believe in this “I don’t have enough time” kind of thing. You’ve got to just prioritize (your list). If something drops below the line, I guess it’s not important. I don’t believe in crazy work. I don’t feel stressed.

That is perhaps the most inspiring thing: the chief product officer of a hyper growth company saying I don’t believe in overworking or being stressed.

We work hard, at least most of us do. When we ask employees, “Are you ok with the work?”, we generally get positive feedback. I think also it’s working hard, reasonably hard, because you don’t want to burn yourself. It’s keeping yourself inspired and saying, “I want to do this more.”

What types of things would you tell young Eilon or young Michael to keep in mind as we go through our journey?

When you think about a product, make sure you make one customer really really happy. Don’t focus on making everybody a little bit happy. Eventually if you make people really really happy, they’re going to bring their friends. We call it raving fans. I think if you can be a good person and be authentic and work with other people, I think that helps. Probably not mandatory, but it’s kind of nice.

Talk to me about this raving fans idea. Why is it better to have a small cohort of super fans rather than a much larger core that thinks you’re a good company?

Especially in the beginning, you want people to bring their friends. If they are mildly excited, they're not going to tell their friends. I think the other thing is if you’re not super successful, you’re always vulnerable. There’s always downturns. I think if you are not bringing constant value, in the first downturn, you’re going to be the first thing they're going to turn off. We want to be one of those systems where people are like, “I can’t live without it.”

Authentic. I’m a big believer in being authentic, being yourself; I also encourage people around me to be authentic. Self-motivated.