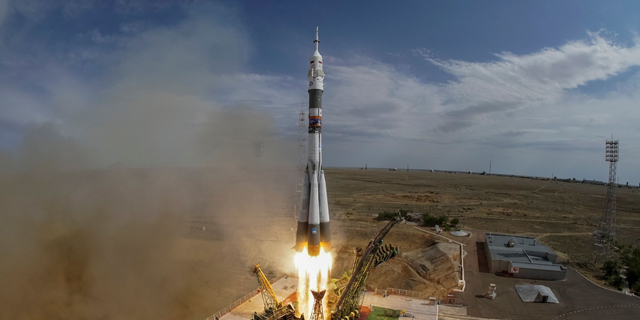 The satellites are equipped with the company’s high-functioning LEON processors and will be used to monitor emergency signals from ships, planes, and hikers

Israeli spacetech startup Ramon.Space 's technology powered three Israeli satellites on a research and location mission in space on Monday. The launch is part of a mission that includes 38 satellites from 18 countries, among them Israel, South Africa, Japan, Saudi Arabia, Canada, Germany, and others. Originally scheduled for Saturday, the launch was delayed to Monday due to an issue with one of the rocket’s upper stages, according to a release from the South Korean Ministry of Science, which mediated the commercial rideshare mission. The Soyuz-2 rocket took off from Russia’s Baikonur Cosmodrome in Kazakhstan at 8 a.m. Israel-time carrying three Israeli nanosatellites built at the Technion Insititute of Technology, which were equipped with Ramon.Space’s high-functioning LEON processors. The three nano-satellites, termed Adelis-SAMSON 1, 2, and 3 were built at the Technion's campus. They will be used to demonstrate long-term formation flights, and test whether a series of small satellites can be used to monitor signals from emergency locator beacons used by ships, planes, and hikers. The satellites will be able to receive signals from Earth and calculate their precise locations for the search and rescue purposes, including the abilities to locate and identify humans, as well as utilize remote sensing and environmental monitoring. The software and algorithms for the flight operations were developed in a Technion laboratory. The Adelis-SAMSON project was managed by the Asher Institute for Space Research at the Technion along with faculty members from its Aeronautics department, and is funded by the Adelis Foundation, the Israel Space Agency, and the Ministry of Science and Technology, along with additional Israeli space tech companies.

Unforgettable morning at the Baikonur Cosmodrome! Roll-out of Soyuz-2.1a LV from AITB to the launch complex of pad No.31.! The broadcast link is already available for the March 20 launch, you can initiate the reminder not to miss the stream: https://t.co/LHJ1yzxonM pic.twitter.com/XvDC3mqgoh

Ramon.Space is an Israeli startup that builds space-resilient supercomputing systems to bring the next generation of computing to space. Its technologies have been used in over 50 space missions across the Solar System, and aims to lead the digital transformation of space. “It’s exciting to be part of this great achievement. These moments are what makes our work so special. The technology created by our company has participated in several space missions from many countries. However, it’s especially exciting to be part of this launch which includes three Israeli satellites. We are very proud to be part of this inspiring space program and we congratulate the Technion for this great achievement,” Avi Shabtai said, who serves as the CEO of Ramon.Space.