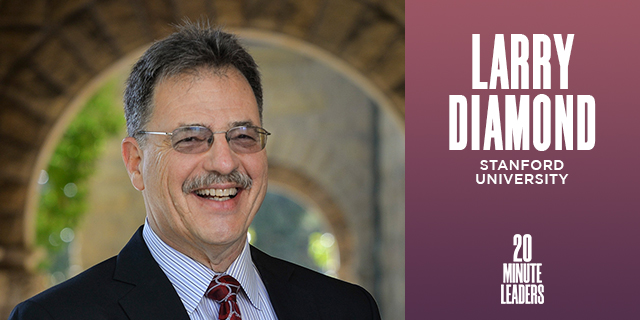 “We need to be proactive, to seek out multiple sources of information, and to check and verify the information we’re getting”

Michael Matias is joined by Larry Diamond, senior fellow at the Hoover Institution, Stanford University, to discuss the idea of liberal democracy and freedom of information

Politics have a history of being convoluted and challenging, and with social media changing how we get information, the political web has only gotten more tangled. At the heart of this complex is democracy, and as Larry Diamond, senior fellow at the Hoover Institution at Stanford sees it, liberal democracy is the only option to ensure human dignity. While it can be difficult to sort through and verify the information that social media provides, Diamond explains that social change can only be attained through educated, open conversations. As Diamond discovered through his involvement in America in One Room, a meeting of more than 500 people of different backgrounds, ethnicities, and opinions, people are more than capable of communicating on hotly contested issues and appreciating another individual’s side. Conversations like these lead to progressive change, and Diamond emphasizes that societies across the globe can benefit from these communicative strategies.

Larry, can you give me a brief rundown of who you are and why you are interested in democracy?

I'm a senior fellow at the Hoover Institution on World Revolution and Peace and at the Freeman Spogli Institute. I'm a professor by courtesy of political science and sociology at Stanford, and I co-edit the Journal of Democracy. Obviously, I care about democracy. I believe in freedom and individual dignity. I have always believed from a philosophical standpoint, but now I know, after 40 years of study from a scholarly standpoint, that liberal democracy is the best way, and I believe the only way, to fully ensure human dignity.

Why is there the word "liberal" in front of the word democracy?

You had earlier hoped that I would define democracy, so let me do it in this way. A democracy is a system of government in which people can choose their leaders and replace their leaders in free and fair elections. If you don't have that, then you can't get real political accountability. Maybe you can pressure a semi-authoritarian regime, but without the ability to remove leaders who misperform in free and fair elections, you can't ensure political accountability and you are very likely to slide rapidly down the path of tyranny and abusive power. At the same time, the political dimension of competition and accountability through the fairly crude and limited instrument of regular free and fair elections is not enough. The liberal dimension is everything else; it's ensuring that you have very extensive rights of speech, press, and association and that you have a strong rule of law in which the courts are fully independent. It also ensures that you have a strong constitutional order that will defend human dignity and provide at least some means to correct the kind of abuses of human rights that we're now seeing in too many American cities.

What are some of the biggest challenges that you've seen over the past 40 years dealing with this information around the world?

There's an eternal challenge of ensuring freedom of information. It's not just that people have access to information; there needs to be the freedom to gather, report, convey, distill, and opinionate in terms of information. I say it's an eternal challenge because once again we're seeing a war on independent media by autocrats around the world who don't want to be held accountable and don't want to have their abuse of power exposed. We're seeing pressure on the independent media even in countries that have been considered liberal democracies. I'm sorry to say that now (in 2020) we have a president of the United States who has contempt for independent media. He has called them "purveyors of fake news and enemies of the people," and this gives comfort and encouragement to autocrats around the world who want to subdue and completely control independent media.

What is your reaction to the leaders of the free world who are perhaps steering away from this so-called liberal democracy that we're aiming for?

I have been increasingly disturbed, angered, and horrified by what they’ve been doing. I think it represents danger not only to our democratic values but to our institutions as well. They’ve been misusing the military, misusing the justice department, dividing the country, and firing anyone who tries to hold them or their administrations accountable. I think civil society here and elsewhere needs to stand up to this, and people from across the political spectrum need to rally behind common principles of not just democracy but liberal democracy, which include tolerance, pluralism, respect for the independence of media, and accountability of institutions. I also do not want to neglect the other half of your question, which revolves around the new era we are in with social media. That brings a fresh challenge. Before we thought it was enough to just have independent media. They would constitute an arena of pluralism of information and contestation of ideas. Maybe there would be some irresponsibility and sensationalism in the midst of it, but people would kind of ferret it out. In the era of social media, with the extraordinary precision and power of micro-targeting, the algorithms that social media platforms generate, and the anonymity of many of the purveyors of this information have pushed us into a new and much more dangerous era.

What is our responsibility here as educated young adults? What do we need to do to ensure that we're moving in the right direction?

Let me first discuss the information and then I'll move to the action. We all need to be better educated and better informed and to be well informed, intelligently informed, and responsibly informed in a democracy, we can't be passively informed. We cannot allow the sources of our information to constrain what we're getting or give us only what they think is going to entertain or outrage us. We need to be proactive and seek out multiple sources of information. We also need to verify the information we're getting by checking assertions and validating the authenticity and credibility of the claims that are being made before we repeat them. On the action side, don't dismiss the importance of voting once every four years. It's the last line of defense for political accountability, good governance, and the protection of civil liberties. Additionally, as we've seen in the last two weeks following the murder of George Floyd in Minneapolis, peaceful non-violent discipline can make a difference and can bring about social change. We saw it in the civil rights movement in the United States, we saw it with the women’s suffragist movement in the United States, we saw it with the anti-war movement in the United States, and I think we are entering a period of profound social and political reform in the United States.

One of the main themes that we were discussing in our sessions was this idea of polarization and how to bring people together for educated discussions. Talk to me more about America in One Room. What is it about?

I was privileged to be part of a very imaginative and far-reaching exercise in Dallas, Texas, last year led by my colleague James Fishkin to bring 526 randomly selected Americans of all ethnicities, parties, and ideological persuasions together for four days to deliberate on some of the major issues facing the United States. What we found is that when you bring people together and give them access to well researched briefing papers and allow them to talk about the issues respectfully in small groups with people that come from different places, their opinions change. On a striking number of issues, there was a change, and that change was toward less polarization. Republicans, Democrats, progressives, and conservatives were coming together and reaching some sort of creative common ground. We had people who said, "I’ve never interacted like this with a white person before" and vice-versa. They see them as human beings. An effect of polarization, this emotional tribalism, attenuates, and that's very important for the future of our democracy.

I would love to hear three words that you would use to describe yourself.