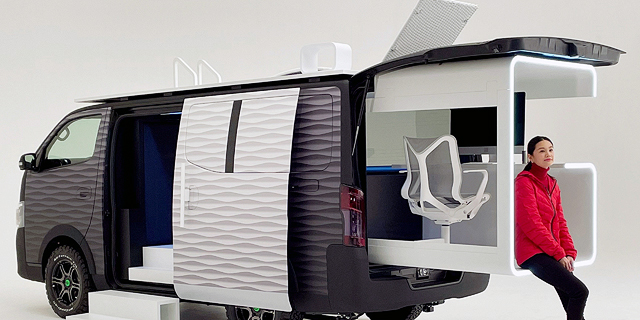 The Tokyo Auto Salon is the place where automakers go to go bananas. Compared to the straight-laced Frankfurt Automobile Exhibition or the elegant Paris Motor Show, where new models that are meant to become best-sellers are exhibited, Tokyo presents the models that won’t go on sale to the public, those that encapsulate Japanese automakers' whimsy and innovation, meant to inspire. One of those trends on display is creative versions of existing car models: small cars that transform into 4 wheel drive beasts, flying cars, or vehicles that upon parking eject portable scooters. This year, the Tokyo exhibition, just like all the others, was held virtually due to the coronavirus (Covid-19) pandemic. The new models too began to reflect a new reality — gone are the days of unlimited funds and total freedom of mobility. Veteran automakers have taken a step back. It’s not as if automakers began producing special vehicles for the pandemic period, but they did seemingly take on new characteristics, slightly reminiscent of the 1930s. Cars are no longer meant to simply take you from one place to another, rather they form a closed world, a portable bubble that provides momentary escape from a dismal reality. 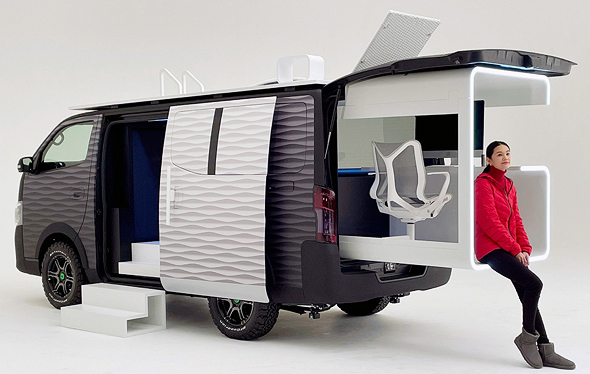 Everything is relative of course. Automakers know that they can’t showcase special cars tailored to the pandemic. A new car isn’t meant to reflect a bleak future. The solution they came up with are cars that aim for a rosier reality, that can engulf those who are interested in leaving their homes despite the pandemic that’s raging outside. The most prominent example of this would be Nissan’s NV 350 caravan. The NV 350 isn’t a new model for the company, neither is its caravan version. But this version is a sort of an “Office Pod,” an automobile that can function as a mobile office. The additions that Nissan is offering are simple, and two years ago would have caused the industry to snicker: an office desk and chair and basic office supplies, which are located in the vehicle’s rear, and can be ejected at the press of a button, creating a work space for those who choose to work outside. The pinnacle of Nissan’s technological offerings, however, is in this case affixed to the roof: a folding parasol and chairs that are designed to relieve tired workers. It’s a perfect solution for those who no longer go to the office, and in the spirit of the times, it is also equipped with an antibacterial UV-lighted glove compartment. Honda has also taken an existing vehicle, and with a few cheap add-ons turned it into an instrument for urban escape. The popular Honda Jazz has been transformed into a whole new concept in its Jazz Cross-Star Custom, a car designed for outdoor excursions, or to make a quick getaway from pandemic-stricken cities. The changes it is outfitted with have prepared it for the apocalypse: a massive roof rack and large equipment containers affixed to the roof, with minimal alterations to the engine to preserve high reliability as well as to send a clear message: Jazz Cross-Star Custom owners can depend on their vehicle when they need to escape. And at a time when cafes are closed, Honda also offers a portable cafe in its vehicles too: a small minivan called N-VAN can park, unfold a small rooftop awning, unveil a menu, and provide food services easily. Whoever can’t travel to the nearest cafe, needn’t worry. Their coffee is on its way. Hyundai chose to deal with distance restrictions by developing a humanoid robot to attend to customers at service stations instead of flesh and blood humans. Hyundai’s customer service robot, named DAL-e, is equipped with a language processor that allows it to understand, as much as possible, customers' concerns and refer them to the proper services. In addition, the robotic-Hyundai is equipped with facial expression processors, so if a customer is angry, the robot will know it. If a customer is satisfied, then Hyundai scores. In contrast to the Japanese automakers who presented their “coronavirus cars” which are on the verge of absurd - since no one is rushing to purchase a car with a parasol on its roof - other automakers are racing to present more feasible solutions. Chinese automaker Baojun presented its small station wagon, the RC-5W. In a market filled with off-road and revolutionary electric vehicles, another station wagon offering isn’t a source of excitement, but the RC-5W has a secret weapon: a huge roof-mounted tent that pops up at the touch of a button, which isn’t something found in your average station wagon. The reason is clear: in a moment, Baojun’s car becomes a coronavirus escape vehicle that enables its users to flee the city, without any of the exaggerated gimmicks of the Japanese offerings. Now cars can combat viruses too Chinese automakers haven’t hesitated to deal with the pandemic head on. Just like aircraft manufacturers have announced the installation of advanced air filtration systems in their cabins, Chinese automakers also presented changes to their vehicles’ interiors. Just like all things in China, car designs seem to be influenced by orders from the top: the Chinese government demanded rapid developments to allow the country to combat the coronavirus, and automakers rushed to present virus-battling air filtration and conditioning systems. Although their efficiency is questionable, their mobilization effort remains impressive. For example, Chinese Geely, which also owns Volvo, six months ago rushed to unveil its air conditioning systems in certain models, which stand in line with the N95 anti-pollution standard, meaning they are capable of protecting occupants from the virus. The manufacturer claims its system filters out bacteria particles from the air in the passenger compartment and streams in clean fresh air. Even though it’s unclear how such a system can assist already-seated passengers or those that enter the vehicle, at least it sounds reassuring. In contrast, the former-Swedish-held Volvo, which is now held by Geely, understands that there is a limit to what companies can tell customers without risking a lawsuit. That’s one of the reasons why Volvo cars are equipped with a sophisticated and advanced air conditioning system that can filter out microparticles, without promising that passengers will remain protected from the coronavirus.

The pandemic’s effect on the broader auto industry is more revolutionary than simply transforming a commercial vehicle into a remote office or cafe. A report by the McKinsey consulting firm from the end of 2020 analyzes the long term effects on the auto industry, and is based on several interesting assumptions that illustrate how the pandemic will affect car design. The first section looks at the equation calculating time vs. health: which types of vehicles will consumers use to both save time and ensure their health. That equation makes a crowded intercity bus ride, for example, cost prohibitive. A safe drive in a private car is thus ‘cheaper’ in comparison despite its much higher cost. For that to happen, cars will need to be much faster. Not in terms of breaking the speed limit, but rather in retaining the ability to drive smoothly and merge effectively with traffic, they must afford high connectivity, with reliable navigation systems that can predict traffic jams. Volkswagen, for example, revealed a few weeks ago its plans to present its electric cars, which in the auto industry are fondly termed “Tesla Killers” and plan to compete with Elon Musk’s offerings. Volkswagen hasn't yet revealed the full details on its electric terminator, but it has emphasized that its new vehicle will have a very high level of connectivity. That fact isn’t surprising and is also a heads up for the future: the coronavirus is also a wake-up call to the polluting auto industry which creates overcrowding and congestion on roads, something that over the past year, amid shutdowns, made the world realize that pollution and traffic aren’t existential. Automakers will be required to make their offerings more suitable to demands that ensure that the positive sides of the pandemic - getting outdoors more, lesse pollution, and finding new uses for existing cars - will continue even after the pandemic itself passes.