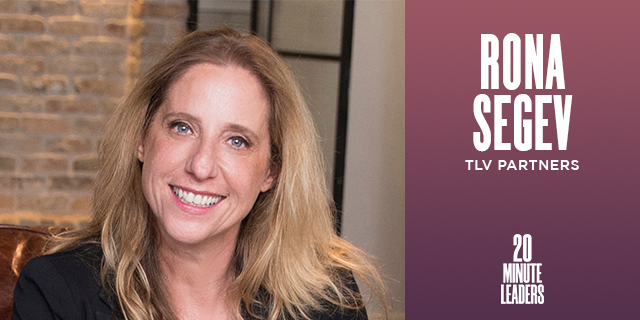 Michael Matias is joined by TLV Partners' Rona Segev to learn how entrepreneurs sometimes need to step away from negotiation tables to create strong, trusting relationships

Many entrepreneurs dream of working with prominent investors and partaking in intense negotiations and conversations, but Rona Segev, founding partner of TLV Partners, has adopted a more personal and intimate approach when it comes to venture capital. As Segev explains, it is fairly common for investors and their entrepreneurs to argue and create an aggressive or vicious working environment. This type of relationship will not always be conducive to success, and Segev sought to create a firm that emphasized a positive company culture. In her current role at TLV Partners, Segev is able to develop long-term relationships and collaborate with founders in a way that is constructive and mutually beneficial. Segev thoroughly enjoys forming these intimate partnerships and encourages investors and entrepreneurs to take a step away from the negotiation table and work with one another to create strong, trusting relationships.

(0:48) Give me a little background. How did you get to become a leading investor?

I started by learning psychology and philosophy in the Hebrew University. When I was 24, I had this crazy idea to do something in computers. It was ‘95. I found someone who was crazy enough to give me 200K, and we started a really hardcore gaming company. We developed three games, including Virus. I sold the company when I was 27. I was pregnant with my first set of twins; I now have two sets of twins. The main reason I joined the VC was because I thought, “You’re now a young mom; for at least two or three years, it’s probably not very wise to be an entrepreneur again.”

(3:03) There’s a discrepancy between gaming and what you studied. What was the trigger there?

Our initial concept was taking Lego and putting it on computers. But we found ourselves inside this segment called “edutainment,” and I just didn’t like it. Then we said, “Ok, let’s take this robot that we’re building with Lego and let’s go and fight,” and we basically copied DOOM. Very quickly, we became a pure gaming company.

(4:00) Tell me about this transition going from entrepreneur to investor.

It was a very humbling experience. When I joined Evergreen, no one wanted enterprise software and security, so they handed me this segment. I didn’t know anything. Sometimes I apologize to entrepreneurs I met back then because I really didn’t understand a word. I started asking. I was asking questions constantly, and this is one thing that I’ve learned since: never to be ashamed that you don’t know something. You can learn. Just tell the person, “You know, I’m not familiar. Can you please tell me more about it?” The first two years, I was basically listening and learning. I was lucky because when I started to invest in enterprise software and security, this was exactly the time (2002) that those areas became hot areas in Israel, and most of the exits came in enterprise software and security. Here I was at the perfect time in the perfect industry, and the rest is history.

(6:19) Sometimes your field can be cutthroat and competitive. I read your take on the type of personality you can have on your journey; talk to me about that.

One of the things I didn’t like about my career and the industry in general is a culture which is very, very aggressive. Many times, it’s very hurtful to the company. I felt it also in the relationship between VCs and the entrepreneurs. If you just focus on the essence of our job, the only way that we can be successful is if our companies and our entrepreneurs are successful. Basically, you are investing in people, and what will make me successful is if my entrepreneurs are successful. Everything is built around that. I didn’t understand why people are fighting with their entrepreneurs so much, why they’re trying to squeeze them out of things, why they’re not creating this alliance of interest and working together. This was something that really bothered me for many, many years. This was one of the drivers of starting TLV Partners to prove to myself that you can be very successful and work differently. On TV, successful figures are always vicious and aggressive. We grow up thinking this is the only way to be successful. I truly believe that it’s not true, that actually working with people in collaboration and creating a win-win environment will actually create a situation where people want to work with you again and again, they recommend their friends, and it's just fun.

(10:12) What are some of the greatest challenges and joyous events of starting TLV Partners?

The first thing was going out and pitching this message to LPs, to our investors. I was afraid that they would look at me and say, “She’s weak” or “She’s too nice” or “It won’t work.” But we were very true to our message because we really believe in it and it was very important to us that our LPs would understand the culture. Many of the LPs had started to realize that VCs that are following this type of culture are more successful or as successful as very tough and cruel VCs because the entrepreneurs like them and the experience working with them is more pleasant, so entrepreneurs are more focused on building the company and not fighting with the VCs. Actually, our message was received very well. We raised our first fund very quickly. It took us a few months to raise $110 million. In Israel, this is amazing at this time (2015).

(12:58) How is your relationship with the founders you invest in? I know quite a few of them, but I’d like to know about your side of it.

It’s very different with each entrepreneur because they are different people. Sometimes it’s very intimate; sometimes it’s just very friendly. Some of them call me 20 times a day. Some of them call me once a month. Those relationships also change with time. As we get to know each other better, they are becoming more intimate and different. Those are real relationships. It’s not something you just turn on and off. One of the things they know is that I really do care, and not just about the company, but also about them personally. I do believe that people and companies are interconnected, and I think that happy entrepreneurs are better entrepreneurs. I insist on investing in people that I really personally like.

(14:54) How do you go about the due diligence process? Is it a challenge to really find the personal fit?

It is. I invest mainly in seed companies, and I really like new markets. I love first time entrepreneurs. I invest in people that have no track record, so I can’t check their track record, in markets that do not exist, so there is not a lot of point in talking to customers. Honestly, my due diligence is very intuitive, and it’s a lot about how I feel about the people. I call it going together to an adventure because I know that everything is going to change. The only thing that will not change is the group that is working together. I also like to invest alone in the seed stage because it’s a very intimate relationship. I don’t want them to feel uncomfortable with changing things. I want them to brainstorm with me but tell me that I’m wrong or I’m stupid and feel comfortable saying that. I learn a lot about people when I’m doing the negotiation on the term sheet with them. I come with the interactive cap table, and we just play with the numbers. It takes two to three minutes because it’s really easy. Actually, everything about VC-entrepreneurs’ relationship is really, really simple. Some entrepreneurs will try to optimize, and those entrepreneurs I usually shy away from. From time to time I make mistakes, but it’s very rare. I work with a really great group of people.

(18:59) What can young entrepreneurs take from this personal insight you had of being a mensch?

First of all, really believe in yourself and believe that it’s OK to be fair, to be a mensch, and to be good, and it’s not like you’re weak. It’s actually being strong. Second, pick the right people around you. Pick people who enjoy this type of culture, and then everyone will have so much fun working together. I promise.

(20:04) What are three words you would use to describe yourself?

There’s a guy I really like who told me, “You’re such a strange bird.”