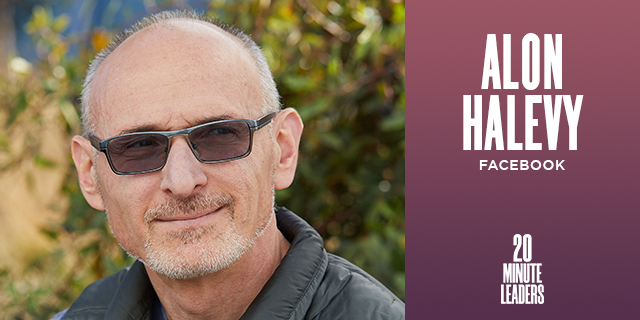 “It is crucial to social networks to keep the content on the network safe for the users ... doing this manually is impossible”

Michael Matias is joined by Facebook AI’s Alon Halevy, who shares the difficulties of balancing a user’s safety while maintaining one’s freedom of speech

Social networks have become a staple throughout society, and while they allow users to explore interesting topics and connect with others, they can also expose the darker side of humanity. Preserving the integrity of these networks is challenging, and as Alon Halevy, professor, author, and current director within Facebook AI explains, protecting a user’s safety while maintaining one’s freedom of speech is difficult. Prior to his work at Facebook and Google, Halevy was a professor at the University of Washington, where he guided students, conducted research, and founded his own startup. After joining Facebook, Halevy quickly realized how difficult it was for a large social media company to monitor every policy violation and is actively working on AI mechanisms to improve this system. Halevy is passionate about creating technologies that have a positive impact on people’s lives and hopes to continue to be at the forefront of this AI innovation.

How have you been during this crazy time?

I’m trying to make the most of it. I’ve learned how to cook out of sheer need, and my cooking skills have just skyrocketed to a point where you can actually eat my food.

You previously traveled to 30 countries writing a book about coffee, though your career has been in tech. What is that all about?

I always like the vibe in cafes. I always noticed that in different countries, you get different experiences in cafes, and so I was very curious about trying to map that and study it in a little more detail. Then I started telling my friends I should write a book about coffee. After a few months, my friends started saying, “Hey, where’s the book?” Once you “sign” a social contract, you have no choice but to do it.

What is your favorite coffee you’ve ever tried?

The favorite is from a region called the Yirgacheffe in Ethiopia. It just blew my mind. Great coffee will just blow your mind.

Tell me about your journey. You’ve been an entrepreneur, researcher, professor, and at companies like Google and Facebook.

I had no doubt in life that I needed to be a professor. My father was a professor. It looked like the right job to do. I never actually had a point in my life where I had a hard decision to make. After I finished my PhD, nobody gave me a professor job. I went to AT&T Bell Labs. A few years later, I got an offer to be a professor at the University of Washington.

What attracted you to academia so much even in the dot-com rise?

At my very core, I like to think about new ideas, break new ground, and ask the questions that will lead other researchers and engineers and companies to think about the next generation of products. Being a professor is a good place to do that. I really enjoy working with students. But I also had an entrepreneurial bone in my body.

Take me through your two companies. The second one was acquired by Google, which is when you joined Google, right?

Yes. The second company was based on a project we did at the University of Washington. We developed some technology that enabled search engines to actually crawl beyond forms on web pages and therefore add many more high quality pages to the Google index at the time.

Even though Google was already a public company when I joined it, web search was still in its infancy. I remember Google was an extremely exciting place to be at.

Give me your two cents about this intersection between academia and startups. Do universities want you to start a company?

Over the years, the universities realized that this is a good thing for them. If you go back even 20-25 years, it was a difficult thing to do. It takes a while to work out the process and to make sure that everybody gets the right credit. Universities were letting faculty leave for a year or two to work on their company and then come back, which is really important. I think today it’s sort of taken for granted that people are going to do this, and I think the process is more well established. But it’s not easy everywhere.

Today, you’re a director within the Facebook AI group. Talk to me about why you are passionate about artificial intelligence and our responsibility as we develop AI.

The short answer is there’s never been a time in history where AI was so crucial to the continuing functional behavior of humanity. Social networks are awesome, right? They enable anybody to have a voice. You can start connecting with people in other parts of the world that share a common interest. But—and there’s always a but when there’s a great technology—social networks also are a window into the worst in humanity, whether it is people putting up hate speech, people creating and disseminating misinformation, people exploiting other people.

You can have a thousand people reading every post, but when you get to millions or billions of posts a day, it becomes a feat.

Yes. This problem is known as the problem of preserving integrity within networks.

It is crucial to social networks to keep the content on the network safe for the users. Doing this manually is impossible. We have a bunch of AI systems that are constantly looking at content. When these AI systems are extremely confident that this content is violating, they will remove it automatically. When they are not confident or when they receive a user flag, we send it to workers who will look at it and see whether it violates our policies.

Where are we at now? Is it more the automatic flagging or more user flagging?

Facebook publishes, every six months, a report on the numbers. Coming up with policies for what is allowed and what is not allowed: This is a really, really hard problem. Fundamentally, what you’re trying to do is you’re trying to balance between the safety of your users and giving people a voice.

I want to extrapolate with you about what my kids are going to experience. Where do you see AI integrating into our online environment years from now?

Let’s put the integrity problem in perspective first. Thirty years ago, we had a huge problem with mail spam. Now it’s sort of a solved problem. The hope is all these integrity violations, all this hate speech and misinformation, it will be the way of the past like spam. It’s a much harder problem, but the hope is it’ll be like spam.

When you come onto a social network, if you see something that violates the policies, that’s a negative experience. Our goal is to minimize the number of negative experiences. Now let’s look at the happy side. How can we increase the number of positive experiences? That’s really where the opportunity lies. This is just me speaking. How do I make it such that any AI tool helps me be my best self? I want an AI system that knows me well, but it’s very private. I want an AI system that will give me advice at any given point in the day that will enable me to have the best experiences that I can.

I feel like this generation wants personalization and understands they need to compromise on privacy a little bit. I’m a big advocate of that.

I would encourage you to talk to your friends and tell them to run for office. It needs to be done responsibly. This is a field we are actively trying to figure out now.

What are you most passionate about in your career?

Having technology help people in their day to day lives. I want something that actually makes a difference, that either reduces friction for me or makes my life better in some way.

Do you prefer working for a long time to impact a billion users or the startup life where every day you can see your impact?

It’s not this or that. Even when you’re working at a company like Google or Facebook, you’re still working with a small team, you’re still solving hard problems every day. At the same time, you’re publishing papers that have an impact on academia. Without that mix, I would be not very happy.

Thinks outside the box.