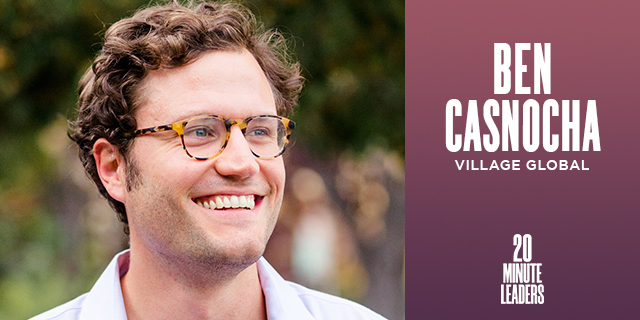 “I’m a huge believer in staying adaptive, staying flexible, and being opportunistic as things arise”

Michael Matias talks to Ben Casnocha, co-founder of Village Global, about his varied career and how his addiction to impact has become his drive to change the world

The common theme in Ben Casnocha’s varied career is impact. The co-founder of Village Global and co-author of two New York Times bestsellers describes the desire for impact as almost an addiction for him. While he believes starting a company has the most impact, he also enjoys affecting the way people think with his writing and finding undiscovered founders to back with his VC firm. This desire to change the world was sparked by a school assignment when he was 12, and he founded his first company at 14. Casnocha acknowledges that the entrepreneurial journey can be stressful, and he advises young founders to also focus on other areas of life, like relationships and spiritual practices. He says one of the best skills to hone is understanding people, which can guide personal decisions as well as professional choices in any career path.

Walk me through some of the cool things you’ve gotten to be part of.

When I was 12 years old, I took a computer repair class. It was designed, of course, to allow the school to use us as child labor to repair all the school computers. The teacher announced that all we would have to do to get an A+ in the final exam is memorize and recite a poem perfectly. It was not a literary poem but rather a transcription of Apple Computer’s Think Different advertisement. “Here’s to the crazy ones, the misfits, the rebels, the round pegs in the square holes, the ones who see things differently. … While some may see them as the crazy ones, we see genius because the people who are crazy enough to think they can change the world are the ones who do.” It was life changing. I asked our teacher, “How do you actually go about changing the world?” He told me, “Ben, one of the best ways to change the world is to be an entrepreneur, is to see opportunity where other people see challenge.” He really inspired me to apply that lens to the world, to see problem as opportunity. I started my first company when I was 14 years old, and I never went back.

Walk me through other experiences that you’ve had and how you have used that mindset.

The first bias I had about the mindset was that it was a Silicon Valley-only idea. It wasn’t until I left the U.S. for the first time that I realized that entrepreneurship was actually global. A really formative experience was spending four or five months outside the U.S. meeting all these different people who were inspiring me with their own entrepreneurial energy. That really taught me that entrepreneurship is a global idea and that it’s a life idea more than a business one. It’s a mindset you apply to your life and to any industry; you don’t just have to be starting an internet company.

Tell me about Village Global. What was the motivation behind building this venture capital fund?

A few years ago, my partners and I founded Village Global to be a new sort of VC firm, and we believe that the nature of entrepreneurship was changing. Changes include that there is great talent all around the world, it’s cheaper and easier to start a company, and increasingly software is transforming different types of industries. We built Village with the idea of being a network-driven venture firm that could invest around the world in all different types of IT-enabled businesses. We spent a long time raising our fund from iconic heroes in the industry like Mark Zuckerberg and Jeff Bezos, so we take their personal capital and we invest it in the smartest entrepreneurs that we can find to sort of bridge the generations between today’s young entrepreneurs and the luminaries who back Village.

It sounds like a very scary responsibility, but I’m sure that it’s exciting. How do you deploy that strategy and find those best people around the world?

We have a unique network model for discovering the best talent. Most VC firms historically have partners who really act as if they are masters of the universe, and they expect founders to parade into their office and pitch their business. But we leverage a network of founders, angel investors, professors, ecosystem leaders, and we empower those people with our capital to go back their smartest friends. It’s a bit more of a decentralized effort to source and select the smartest founders we can. By using a network, we’re able to find really amazing entrepreneurs in hidden and undiscovered places. 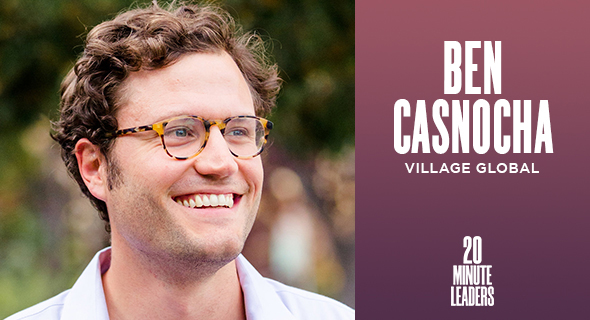 You’ve made a huge impact as an entrepreneur and now you’re making an impact as a VC investor. What really makes you excited about what you are doing?

The thing that’s really exciting about our work is being the first to believe in a founder. We’re often the first firm to commit to a founder. It’s more fulfilling for me to think that we can be the first to invest because that’s what it means to bet on underdogs, that’s what it means to take risks, to believe when others do not. I think there’s something very satisfying about having that sort of contrarian view and then seeing other investors follow us at later stages.

Talk to me about the ventures you’ve formed and the books you’ve written.

I spent several years founding and running an enterprise software company that sold CRM software to local governments, and that business continues today to serve customers in the U.S. I took a break from entrepreneurship and focused on writing. I co-authored a book called The Startup of You, which is a career strategy guide on how to apply entrepreneurial insights to your own life. Then I co-authored a book called The Alliance, which is about how companies can attract entrepreneurial talent. Writing forces you to clarify your thinking, and so to really flesh out my views and get to know my co-author, Reid Hoffman, who started LinkedIn, was a really tremendous privilege. These days I’m 100% focused on Village Global and entrepreneurship, but I suspect in the future I’ll go back to writing books. For me, my drug of choice is impact, so entrepreneurship is certainly one way, but you can also influence the way people think. Books and articles are a way of doing that for me.

Talk to me about this mindset of moving around and mastering different skill sets as a lifelong entrepreneur.

I think some of us live lives that are unplanned and serendipitous and involve lots of zigging and zagging. That’s certainly been my life. I’m a huge believer in staying adaptive, staying flexible, and being opportunistic as things arise, and for me, my blessing and my curse is that I have a lot of different interests. I actually think you can have the most impact on the world by starting a business, much more than a VC can, but the tradeoff is you’re really thinking about that one industry, that one product area for years of your life. My own zigging and zagging in life has been an attempt to satisfy a diverse set of interests.

As a young entrepreneur, there’s a lot of pressure going on. What are some key pieces of advice you’ve accumulated over the years?

I think the sense of pressure has pros and cons. The truth is it is a very competitive world. Especially in fields like entrepreneurship and VC, it requires a ton of work and a lot of luck, I think, to achieve any modicum of success. It is rational to feel some stress about that. It’s useful to cultivate a spiritual practice or to remember the bigger picture about what matters in life to not be totally overtaken by the stress involved. The best decisions that I’ve ever made and the worst decisions I’ve ever made have had to do with people and judgment of people. One of the best meta skills to develop is being really good at evaluating people and understanding whether you want someone in your tribe, whether you want someone working at your company, or whether it’s somebody you want to work for. People are enormously complicated; they’re also fascinating. To really get good at understanding the psychology of people is a generalizable skill that I think will be helpful in any number of career paths.

Entrepreneurial, curious, reflective. I tend to reflect a lot on my life and the world around me.