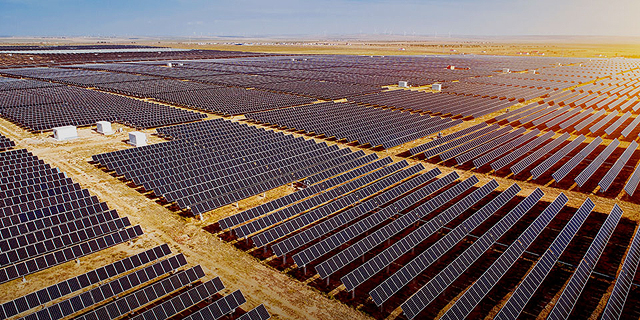 Even though the green energy company doesn’t even have a megawatt connected to the power grid, its experienced founders are attracting plenty of attention

EcoEnergy Ltd. is taking steps toward completing the largest initial public offering (IPO) of 2021 of a green energy company on the Tel Aviv Stock Exchange (TASE). The company hopes to harness investors’ enthusiasm for green energy companies and raise between NIS 500-600 million ($150-165 million) at a pre-money valuation of NIS 2 billion ($610 million). If the offering is carried out at this valuation, it will be nearly identical to that of Nofar Energy, which completed the biggest IPO on TASE in 2020. In contrast to Nofar and other green energy companies, EcoEnergy is entering the market without even having a single system connected to the power grid. In reality, EcoEnergy is asking for such a high valuation based on the extensive experience of its founders and owners - Eyal Podhorzer and Yoav Shapira, who will also make a sale offer as part of the IPO, through developing a portfolio of renewable energy companies. Their experience is meant to guarantee the company will be able to implement its big plans, which are also reflected by its number of projects. In that sense, EcoEnergy’s offering will simply be the next stage in the hype surrounding green energy companies.

Green energy companies are experiencing a boom such as the solar panel industry. Photo: Doral Energy

On Monday night, EcoEnergy published the initial draft of its prospectus. Many details were missing, but it became clear that the names of the company’s shareholders and its founders’ history are key to the company’s attempt at obtaining a dreamy valuation, which will place it among the top of the exclusive club of Tel Aviv’s renewable energy companies, those that already have several projects that generate electricity from solar energy at tens and hundreds of megawatts.

Among the companies that joined the club over the past year are Doral Energy and Nofar Energy, who are traded on the TASE at a valuation of NIS 2 billion ($610 million) and NIS 2.23 billion ($680 million) respectively. Podhorzer and Shapira are also planning to cash in during the IPO. The offering will be conducted using the non-uniform offering method, where in addition to injecting money into the company by selling shares, there will also be a direct share sale from the entrepreneurs to the public; money which will not reach the company’s lofty development plans. Accumulating 4.5 gigawatts of electricity with 15% certainty EcoEnergy has a potential of 4.5 gigawatts, but it is far from certain that a large part of it will ever come to fruition. The part that is certain is 679 megawatt that is currently in the process of being founded. The systems which are most likely to be established, according to the company, are mainly based in Italy (342 megawatts out of 679 megawatts), and Romania (197 megawatts), England (90 megawatts), Spain (50 megawatts), and Poland (33 megawatts). The company expects by 2024 to generate 2.75 gigawatts of electricity, of which 1.8 gigawatts will belong to the company. The deal places EcoEnergy in a relatively high position compared to other renewable energy companies on the stock exchange. For example, Doral Energy is set to own systems connected to the power grid or under construction that will be able to generate around 1.7 gigawatts by the end of 2023. Connected to the power grid by the second half of 2021 The initial connection of these systems to power grids is expected to take place during the second half of 2021, where the most significant chunk will be connected in 2022. The company estimates that it will register revenue flows of 63.6 million euros ($76 million) by the end of 2022. The revenue stream will grow to 116.3 euros ($139 million) by 2023. The company estimates that by the end of 2023 it will connect 2.2 gigawatts to the power grid. It must be noted that the revenue stream consists of three elements, where the sale of electricity is just one factor, while the company is also selling services, and is expected to record revenues from initiating projects. Of those amounts, the revenues from the sale of electricity will stand around 3.6 million euros ($4.3 million) until the end of next year, and at 56.1 million euros ($67.4 million) by 2023. It should be noted that even though the company will initially record insignificant revenue from its sale of electricity, it is also expected to accumulate revenue which stems from its collaboration with the Swiss bank UBS in which it will be setting up solar projects in Italy.