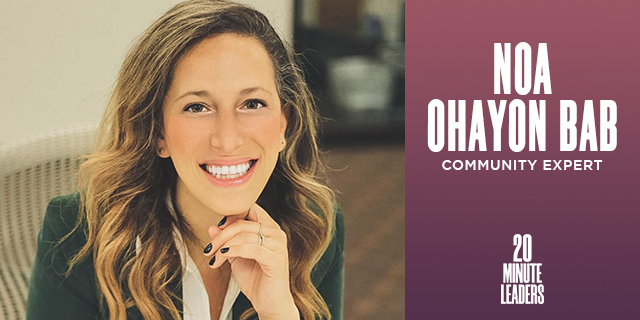 “It was the best school I could think of, working in a startup”

Whether in person or online, being a part of a larger community can be extremely powerful, and Noa Ohayon Bab, future of work expert and community builder, has helped startups and government officials alike strengthen their network of communities. In her various positions, Ohayon Bab has learned how impactful virtual communities can be, especially in regard to product reviews and consumer behavior. Ohayon Bab emphasizes that communication now travels both ways between buyer and seller and that companies have the opportunity to create safe spaces for their customers to interact. In her current role, Ohayon Bab is continuing to strengthen communities by working on the relationship between Israel and the United States. Though this position is more political than her previous work, Ohayon Bab explains that the principles of community building are the same and she is looking forward to the opportunity to further build the partnership.

If I begin to list the different things that you've done, the 20 minutes would be over. But one of the most important things is that you competed against Omri Casspi on a trivia game show. Tell me about that experience.

I lost, and I was petrified being in front of the basketball player. I thought, "Oh, they’re going to ask me so many questions about sports, and I'm not good at sports questions.” I ended up losing on a question about a book, which is my passion, my hobby, my major. But it was not a very good book.

Noa, talk to me about your life journey. You're starting out with literature. You're writing speeches for famous politicians; then you all of a sudden find yourself in the tech scene.

If we go even further, I actually started as an educator because, like everybody else, I wanted to change the world for the better. They said education would be it, especially in Israel when you have so many minority groups and such a huge gap in between certain populations. I was also working in a big philanthropy organization with students that came from a disadvantaged background. While I was making all that impact, I still felt that I was restrained in between four walls sometimes. I felt that with the impact I wanted to create, tech would be it. If we want to prepare the generation of the future, we should definitely skill them up in those areas. I felt that would be the best thing to do because I had that social media non-profit startup.

You were making an impact between four walls. And you thought, “How do I now make this impact at scales that I can impact millions of people?”

Yes, exactly. It's kind of doing automation of impact, I would say, and that's how I made the transition into tech. I started off in a fintech startup, which was completely out of my comfort zone. I do give a huge kudos to this startup that saw the potential in me, and it was a smart move also from my end. It was the best school I could think of, working in a startup. You learn so much, and it was literally the best school. Even if you get a higher education, almost no major can actually prepare you for today's job market, and workplaces are the place to give you the skills and teach you the hands-on work.

All along I kept on having my job search platform, which I co-founded with a friend named Dana. I could see very clearly this gap as you write your resume, hope for the best, do whatever you can to put yourself into words, and then you send them out and hope that someone gets them. But we all know that even if they get them, they get a chance to read so few of them. That’s a market disruption that I care a lot about.

I’ve been doing (the job search platform) for over 10 years. We have a group of seven volunteers, and people are like, “Why are you doing it for free?” I want to make sure I keep it free for both sides. The organizations will be more than happy to send us as many jobs as possible, and we’re going to keep it free for those who are job seeking, which can be the toughest time of someone's life. It's being able to advance your life. I do think when you talk about online communities and Facebook and social media, many times you would hear people criticize it. I do believe that we can use social media and even online marketing to benefit our life, to become better parents. It makes us better professionals. If you talk about companies and tech companies, I think for everyone it is very clear that the old days of marketing, where you think of a slogan, of a catchphrase, a best image, it’s just not enough. I’m not going to get Samsung just because they have an amazingly beautiful face on it. I'm going to do it because I'm going to find this blog or just a friend or a Facebook group that I appreciate, and I'm going to see some reviews and make up my mind based on that. Studies show that 40% of the consumer choice we make is based on the ear to mouth. This is how we make our choices today, and that's why reviews are so big and so many startups and companies are around reviews. EBay wanted to do this experiment where they take their users around a certain area and build the community around it and see how we curate products better, how we create an inner community to share your problems, best practices, and so on.

Today you're talking from Washington DC. What are you doing there?

Yes, basically the same, but just different. The idea is to have Israeli representatives live here in America, working with the community here in America, working on the connection with Israel, and working on that relationship to make it more in-depth. I'm leading a group here and also moved here with my family on this adventure. Again, following a passion. I can say that Facebook groups in Israel are so big. Studies show that people in Israel spend their time in at least two or three Facebook groups and really consume it.

I'm guessing that there is a little bit of a difference between running the community and engagement for a startup, then for a big corporation, and now for more of the government and social issues.

I can tell you that throughout the last decade that I've been doing it in different aspects, you can see that some of the essences run the same. People want to find their peers or people they can relate to. A difference between non-communities or a community or between the old marketing and the new marketing will be around two things. One of them would be that the communication is both ways. It’s not just a company or organization or a social cause shouting out their message. I can give you just a tiny example. When I worked for Polypay—it's a payment app like Venmo—no one in Israel used a payment app. We asked people, “Why don't you feel confident?” Many of them said they don't feel confident enough to put in their credit card information. We just added a symbol, that icon of a lock, that just increased the trust by maybe 30%. It's just a tiny example of how feedback from users can really change your product. The other thing is to create a space for people to communicate with each other. When users get the opportunity to communicate between themselves, you can actually create not just users, but passionate community members of your product.

I have to ask you the last question, which is three words that you would use to describe yourself.

It’s passionate, community, and adjustable. People translate what Darwin said as “the stronger survives,” but if you look closely at the translation, it says, “He who is more adaptive,” that’s who survives. Being adaptive, being able to adjust to whatever comes your way, that’s kind of the way to survive, but also to enjoy.