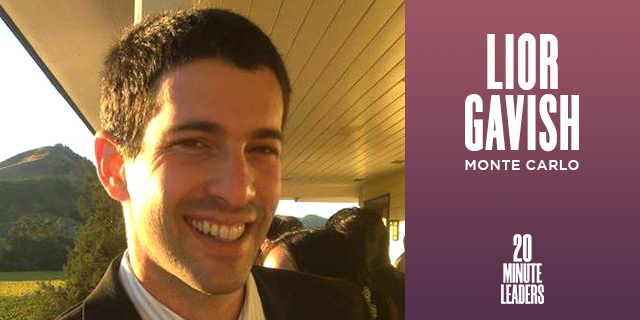 “I made a decision independently that I wanted to start a company. It was just too exciting to pass up”

Even though he founded a successful startup, Lior Gavish realizes he made some mistakes there that he is working to avoid on his new endeavor. His cybersecurity company, Sookasa, was too focused on a small part of the market, and Gavish says they missed opportunities to expand. Now as the co-founder of Monte Carlo, which helps teams manage the reliability of their data, he is keeping his eyes open for opportunities to become a category-building company. In between startups, he worked at Barracuda after they acquired Sookasa. He says in a larger organization, one of the best ways to have an impact is to hire the right people and set the culture for your team.

Click Here For More 20MinuteLeaders Tell me a little bit about who you are, Lior. Are you an engineer or entrepreneur?

I've been going back and forth about that. I'm definitely an engineer by training, and this is where my heart is at. I did find myself spending a lot of time on non-engineering stuff because I have spent a lot of time in an early-stage startup where you get to do a lot of different things. But I'm still hoping that one day I'll get to get back to writing code all day long. I'm definitely passionate about that.

Tell me a little bit about the journey that you took and some of the decisions that you made.

I started my career as an engineer. I worked for a couple of startups in Israel in my 20s, and at some point, I wanted a new adventure to learn things beyond engineering and maybe try a different place as well. That’s what inspired me to come to Stanford. It brings together general business and leadership training along with an environment that's very tech-oriented and startup-oriented. I dabbled with thinking I might do non-tech stuff or semi-tech stuff like VC but ended up deciding I wanted to do the thing I love best, which is startups and engineering. My co-founder back then was a Ph.D. at Stanford in electrical engineering. We partnered together to start Sookasa in the cybersecurity space.

When was the moment you decided to start this together? Were you always talking about putting a company together or did you have an idea first and then join forces?

I think I made a decision independently that I wanted to start a company. It was just too exciting to pass up, and I actually worked with a handful of people. You go between different projects and different ideas. What I ended up doing with my co-founder back then just ended up feeling right. It was the right team. It was the right space. It was an exciting opportunity. It ended up being the right opportunity for me among several that I explored. That’s something I would tell anyone thinking of starting a company: it's worthwhile looking through several different teams, if you can, and several different spaces and ideas and see where things stick. Like, where do you get your passion? Where do you see customers getting excited? Where are things moving and changing quickly? It worked for me.

At Barracuda, you were senior vice president of engineering with email protection. What did you do there?

Barracuda acquired Sookasa. When we joined Barracuda, we were fortunate to work with some really great leaders. We got a carte blanche to “go and do something exciting; it can be whatever you want.” We were thinking, “What are some adjacent fields where we can really build something even bigger and even more exciting?” It was the time when various types of highly personalized phishing attacks and account takeover attacks and other forms of e-mail fraud were growing really fast, and we realized that the industry was lagging behind in addressing it. We had this very unique approach to solving this problem that didn't exist back then, and it aligned pretty well with the things that we do at Sookasa, so we ended up building and launching a product at Barracuda. It was the fastest-growing product for Barracuda ever and ended up leading the market. I learned a ton about the technology, the market we were operating in, building teams and companies, and learning from senior leaders. Throughout my career before, I mostly worked in smaller startups, and you're learning a lot of the time by doing and figuring stuff out and making your own mistakes. It was the first time that I was working for people that were far ahead of me in their careers, and I had a great opportunity to learn and really see how they look at things, how they do business, and how they lead teams. I stayed for a long time and really enjoyed it. I ended up leaving for even more exciting opportunities; today it's Monte Carlo.

One difference is definitely the innovator’s dilemma, where the company has a certain momentum from spending years and sometimes decades building stuff. It's selling well, and it's working great. How do you come and tell them they really need to be investing in this new exciting thing that's making no money right now, but will be big one day? I think that's definitely a challenge in larger organizations. Also, it was definitely a much larger team in Barracuda. I learned that really--it's also true for smaller teams--but culture wins, right? The main way by which I could impact the organization was to hire the right people and to put together a framework or an environment that would make them successful.

Tell me a little bit about Monte Carlo and that decision to leave Barracuda to again be an entrepreneur.

We help data engineers, data analysts, and sometimes data scientists. We help them with the buzzword called observability. It's the idea of being able to make systems reliable. Maybe the way to think about it is 20 years ago, if you even had a website and it went down, you might call someone in marketing to take a look at it the next day. Today, any sort of business is strongly relying on online applications and websites, and if something gets broken, someone's going to wake up at night to fix it. We think the same thing is happening to data. Data in the past used to be BI reporting that you would look at once a month or once a quarter. If the numbers are wrong, no worries, you took a few extra days to fix that. That's changing rapidly today. Modern tech companies live off of their dashboards. Thousands of people look at the data every day to make every single decision, and increasingly people are using machine learning models to automate decisions. A lot of companies are serving data to their customers, and so the reliability, accuracy, and correctness of that data is becoming important. It's something that you need to take care of in real-time. We’re helping teams with managing the reliability of their data products, reporting models, and analytics.

What are some of the biggest insights that you're taking with you from Sookasa to Monte Carlo?

I hope I learned a few things. The main one I think at Sookasa was we were so focused on a specific niche in the market that we overlooked even larger opportunities that existed back then. We were laser-focused on optimizing for an edge, and I think that ended up being a mistake. What I learned from that was you have to be laser-focused on what you're doing, make your customers happy. At the same time, you want to be attentive to what's going on and be willing to change course, expand the definition of what you're doing, and see where things are going. If you want to build a really large company, and that's our goal with Monte Carlo, it needs to be an industry-changing company. To do that, you really need to see things in a broad way. We're trying to build a category. That's what I took away: to keep your eyes open to category-building opportunities that end up being much more exciting.