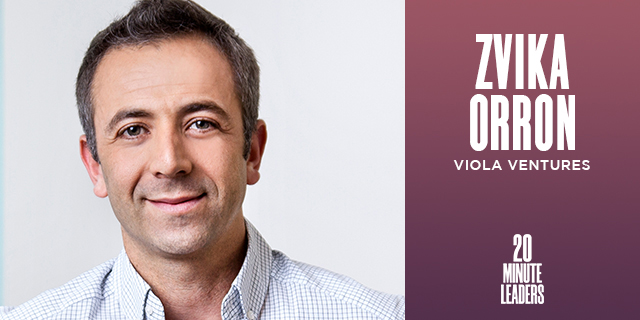 “You need to find those points in life where you create boosts of motivation and leverage opportunities.”

Sometimes it is tragedy that sets entrepreneurs on their mission to change the world, and that was the case for Zvika Orron. When an Israeli fighter pilot died in a crash after losing consciousness, Orron and his partner were stunned that there wasn’t already a solution for this problem. They decided they had to do something about it, and they helped develop life-saving technology to alert pilots to physiological changes and engage autopilot when necessary. What they learned helped them launch LifeBeam and the wearable personal training device Vi. Orron emphasizes the importance of leveraging the opportunities that come your way on your own journey even if they aren’t what you planned. He hadn’t dreamed of becoming a pilot, but he took the opportunity to go through the training, which set him on his current path. Today, he works for VC firm Viola Ventures, investing in deep-tech companies.

I want to understand your personal journey going from being a major in the Air Force as a pilot to being an entrepreneur and being the CTO and co-founder of Vi. Now you're in the Viola group and sitting on the board of some of the most amazing companies. Tell me a little bit about yourself.

I started when I went to Flight Academy. It was something quite opportunistic. I never had a dream to become a pilot. I would say that when I started flying, I really wasn't a major fan. I didn't fall in love at first sight. It took some time. The first breaking point in my career was when the Air Force decided that I'm not good enough to be a fighter pilot. I would become a cargo pilot. That killed me, and I think that was a very important moment in my life.

Why was it such a turning point for you that you even reflect on it now?

At 19, I hadn't experienced a situation that I couldn't get something that I really wanted. This is the first time when this decision is not reversible. They tell you, “You just don't have the capabilities required to become a fighter pilot. Nothing that you can do will change that.”

How do you see that turning point following your journey?

My second interaction with the fighter dream was when my squadron commander offered for me to join the experimental squadron in the Air Force. My job was to mediate between the engineering and the pilots and to help to better organize and plan experimental flights. There were two groups: there were the fighter pilots, and there were the smart engineers planning the flights. I decided, “Okay, I have to move to the second group.” Two months into my new position in the experimental squadron, I just signed up to biomedical engineering and started my first degree in parallel to serving as a pilot in the Air Force.

How do you then finish your service? Do you know you want to be an entrepreneur?

I was in the third year of university, and there was a horrible accident of Asaf Ramon, who was a fighter pilot. The reason was a loss of consciousness. His father, Ilan Ramon, was the first Israeli astronaut, and he died on the Columbia. When his son died in this F-16 accident, my partner and I were completely puzzled. We did not understand how isn’t there a sensor that can identify when a pilot is about to faint and just connect the autopilot to allow the pilot to get himself together. We decided we need to figure this out. Long story short, we developed a solution that allowed us to identify when those pilots are about to faint, and together with Elbit, we built the solution.

Is that the beginning of Vi, the interaction between a device and our physical being and then having smart sensors that are analytics based on that?

Yeah, that's definitely the beginning. We were like 26; we had no business vision or intuition whatsoever. Looking at this market, this was a tiny tiny tiny market. We got support from the ministry of defense and were able to develop the solution. Elbit took this and developed it into a real product. We decided to take the technological assets that we had at the point, which was the physics and the capability to develop optical sensors to monitor physiological parameters, the signal processing capabilities that allowed us to extract the most interesting physiological signals out of the sensor and translate all of that into very simplified actionable insights. We wanted to take the same technological assets and product perspective into fitness and wellness. If you want to run a marathon, why isn't there a solution that can monitor your physiology and customize the training progress specifically to your needs?

What I’m hearing is that a lot of these things in your journey are about harnessing opportunities, accepting the circumstance, and then leveraging it to push you forward, right?

Exactly. I think that in almost every single event, you need to find those points in life where you create boosts of motivation and leverage opportunities.

Tell me a little bit about your entrance into the VC world and specifically about Viola Ventures and how you look at the investments that you lead within the group.

I joined Viola more than four years ago. The areas that I cover are areas where the major risk is in product development. In most of the companies, usually the major risk is in go-to-market and in scale. The entrepreneurs that I meet are presenting a problem, a well-defined problem, and if their solution works, then there will definitely be buyers. Often when we invest, it is still theory, not a real product in place, but given the timing, trends, the introduction of new technologies, we believe that if they succeed, then they can really create a dent, an impact, and a significant market.

It seems to me that as an investor, you have to be in a very different mindset when you invest in those types of companies rather than the more traditional ones. How do you see your due diligence or your thinking approach differ from that of an investor who is concentrating more on companies whose risk management is the go-to-market and product markets?

I think it really depends on the specific vertical. When we invest in a semiconductor entrepreneur, a lot of it is based on past achievements and if they can really expand and look into new areas. I'm trying to understand how curious these guys are. How did they enrich the team? When you look at a new brave world, like computational biologists, then there is not enough legacy to find those people that did it already 10 times in the past. You are looking for, first of all, people have to be super bright. You're looking at a more rounded, holistic team. If you look at computational biology, you need an immunologist, you need a computational biologist, you need mathematicians. I try to first understand what is the baseline of the founders and what type of people are they able to recruit because for these teams to win, they have to recruit the best of the best. So, the best indication is to see if they were able to bring top-notch people in different disciplines. That's a very good indication to see if this team can break those very complicated tasks.

Do you have to go in and still evaluate whether there is some market for this? It's not that if you solve this problem, then automatically your business is going to be successful.

In deep-tech companies, one of the challenges is that you need to try to predict if there will be a need for this type of solution in four years or five years from now. This diligence requires hours of conversations with people coming from the domain and understanding how they see trends in the market. When we invest in those companies whose existing market is zero, we need to bet that in five to eight years from now, this will be a multi-billion-dollar market. That, I think, would be the most significant challenge.

The most important question I have for you is three words that you would choose to describe yourself.

I'm quite stubborn, curious, and sensitive.