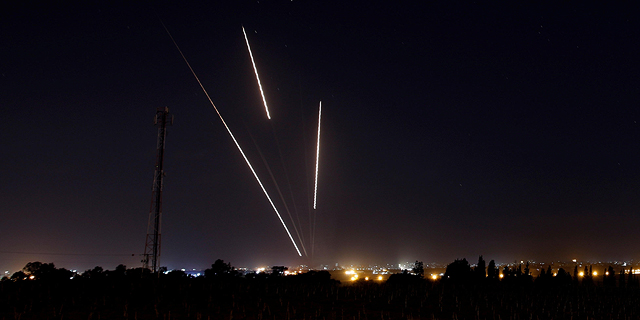 VIDEO: Like a scene from Star Wars - The Iron Dome intercepts dozens of rockets simultaneously

Discover the best facts about the Iron Dome with CTech. Learn more about Israel's famous anti-missile defense system, who invented it, and how does it work

Israel has been bombarded by rocket barrages from Gaza at an unprecedented rate over the past 24 hours. According to the Israeli military, by Wednesday morning approximately 850 rockets had been fired into Israel, 85% of which were intercepted by the Iron Dome, Israel's main defense line against rocket and mortar shell fire from Gaza. Below are seven facts about the Iron Dome.

Israeli defense contractor Rafael Advanced Defense Systems Ltd., the company developing the Iron Dome, lists the defense system as an “affordable” solution. However, the surface-to-air missile battery comes with a steep price tag. Each battery of the Iron Dome, nine of which were used in the 2014 war with Gaza, costs about $100 million. And each individual missile? $50,000. In 2017, the system was upgraded to a precise interception capability of 120 and 160 millimeter mortar shells—a little more than half a meter in length—and is currently undergoing a series of upgrades that will enable it to hunt for snipers and drones within a range of up to 10 kilometers, according to company statements.

Military forces worldwide have been using anti-missile missiles for decades. With the advent of flying bombs and ballistic missiles in World War II, the world understood that there was a problem to solve: to hit a high-speed missile, another quick missile was needed. The technology did not mature until 1961, when the U.S. inaugurated the Nike Zeus, an anti-ballistic missile carrying a nuclear warhead.

Missiles aren’t always precise— especially ones developed in the 1950s and 1960s—and no one wants atomic bombs landing elsewhere from their intended destination due to a lack of precision. In later years, more accurate missiles were developed, such as the 1975 U.S. Spartan missile. However, the ballistic missile field went in the direction of splitting the warhead into several units that independently maneuvered for various purposes, called MIRVS, requiring much greater precision that technology simply did not allow for in the 1960s and 1970s.

The Iron Dome may have been developed in Israel, but Israel is not the only country to wield its own Iron Dome. Rafael denied Calcalist’s request for information on the countries to which it has sold the prized defense system.

Still, the company has previously announced international buyers, including Romanian aerospace company Romaero S.A. in May 2018. In February, the Israeli Ministry of Defense announced a plan to sell Iron Dome systems to the U.S. Army for its “immediate need.”

What’s in a name?

Originally, the system was supposed to receive a less dramatic name, anti-Qassam, after the missiles it was designed to intercept. Later on, the name Gold Dome was considered—a name swarming with sensitive political significance. Golden Dome is one of the names of the Dome of the Rock, an Islamic shrine located on the Temple Mount in the Old City of Jerusalem. In the end, the name Iron Dome was chosen and the missile it uses received the name TAMIR, an acronym for a missile interceptor.

The system is capable of intercepting short-range rockets of various types within a range of up to 70 kilometers. The range is a serious factor, since the longer the route, the longer it takes to calculate the missile's path, and any deviation could lead to a very significant change in the point of impact. Intercepting longer-range munitions requires other radars, such as those of the David Sling system or the Arrow system, and the Iron Dome has a minimum range of 4.5 kilometers.

The Iron Dome was designed to deal with heavy artillery barrages. Each launcher has twenty interception missiles, and many missiles can be fired at the same time. The reason is that the different factions in Gaza that fire missiles at Israel use artillery practice that does not prefer precision. These rockets are statistical weapons, and a lot of them must be fired in order to reach a precise strike. Originally, the Iron Dome was aimed to counter the short-range, unsophisticated Qassam missiles. In July 2009, the first successful Iron Dome experiments were conducted, according to Rafael statements, and two years later the system intercepted its first rocket. Precision, Precision