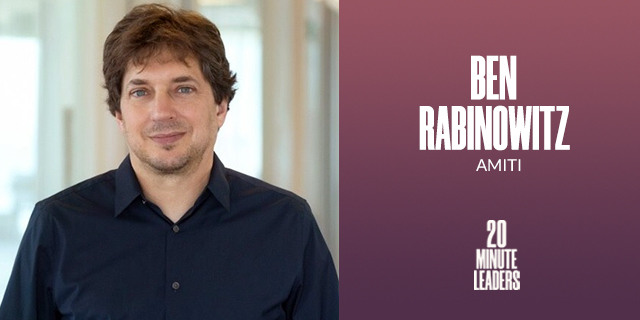 “One of the great things about investing in Israel, is that it's essentially a small community”

As founder of Amiti Ventures, Rabinowitz tells Michael Matias that he meets with many entrepreneurs for brainstorming as well as for fundraising

Israel is well-positioned as an early adopter and adapter of new technologies in Ben Rabinowitz’s view, but he also sees areas where the country can grow. He says many tech jobs are currently outsourced, but with better education and more involvement from the various communities within the country, more jobs could stay in Israel. More could be done to draw talented engineers to move to Israel as well, he advises. As founder of Amiti Ventures, Rabinowitz meets with many entrepreneurs for brainstorming as well as for fundraising. But he warns not to get the two types of meeting confused. If you go to a fundraising meeting, you should be prepared with knowledge about your market. Rabinowitz also feels better about founders who know each other very well, so he says not to feel pressure to find someone with business experience to add to the core team.

You founded Amiti 11 years ago with a clear thesis of what kind of companies you wanted to invest in. Tell me about the founding of Amiti.

Eleven years ago there was a terrible economic crisis. I was kind of contrarian at the time, thinking this is a really good time to start a company. But at that point, the VCs had to really focus on their portfolio companies to keep them alive. There was very little investing in new companies. I thought it was a great time to jump in. Of course, for years, I had been preparing myself. I had the tools, and then the timing seemed right. The challenge is how you find investors who want to play offense. I was fortunate I found some people that really bought into what I wanted to do; they bought into me.

The strategy, which has been the same for all these years, is I am looking for teams with some real ingenuity from a technology standpoint that seem to be the right team for the mission they're going after and they are going after big things. I feel if I have those ingredients, then it makes sense to jump in and invest.

The right team for the right mission. What does that mean to you?

It is like you see that a lot of skill sets that are needed, maybe from a technology standpoint, are there. Let's take Innoviz as a successful investment example. They came from the great experience of working together at 81 unit, which to me means they knew how to really build products. They knew each other well. They each had certain technologies that they knew. On the business side, while there wasn't much, one of the co-founders had been working at BCG, and they had some automotive clients. When you look at the market, some on my team were really against it because some PhDs had another company that seemed like they might be state-of-the-art and leading-edge. My view was if I had to bet on guys coming out of 81 versus PhDs and you have to build a very complex product, I will always go with the 81 team. I knew that they could immediately attract tens and then eventually hundreds of the most talented engineers, so they were magnets. That, to me, was the definition of the right team for the mission.

Where, in your eyes, is Israel headed? What needs to happen so that Israel can maintain its competitive edge?

When I look at the key technology trends, I see the Valley and Israel as the teams that are being the early adopters. For example, with microservices and going from monolithic software to breaking into services, you don't see it happening in Europe. In Silicon Valley and Israel, it seems like it’s mainstream when actually we are in the first inning of a nine inning game. Long term, every country has its challenges; we have challenges here. The education system is not what needs to be from K through 12 and at the universities and keeping the best professors. The teaching profession should not be a volunteer. You should be able to live well and educate youth in the country. Integrating all the communities is important. We have to do a big push on women's issues and gender equality. We need to obviously get the Ultra-Orthodox and the Arab community much more involved in high tech. I think those are critical things.

I agree, but why are they critical things in your eyes?

From a society standpoint, I think we're in a dangerous place, both in Israel and in the United States and many places. In Israel, coming out of COVID, the tech sector thrived. Whether it's Israel or the United States, the other parts of the economy really, really suffered for this past year. One of the best solutions is to bring them into tech. We are outsourcing so much to other countries. We need these communities to get in because we don’t have enough engineers to continue to scale up. In addition to that, we have to think about our immigration policy too. The best engineers in the world wake up in the morning saying, “I want to get myself to Silicon Valley and compete against the best.” But they would love to come here too. So, why not take 5,000, 10,000 of the best engineers every year and give them a path to citizenship in Israel? We have to get all the communities involved and get the best engineers to want to be here. We clearly have the entrepreneurial spirit, the know-how, the guts to build great companies.

What are some things that you are observing as you’re meeting founders? What are some of the dos and don'ts for you?

There are usually two or three people who are founders. It’s really important they are all strong and they've known each other for a while. We, of course, like serial entrepreneurs, but statistically, we are better investors with first-timers. They have so much passion; their company is their identity. Maybe it's two guys and they’ve been working in the past and they are both technical and someone says you need to now go find your business person; we think it is very bad advice. Even if they both are introverts, but one person can fake being an extrovert from time to time, then that's good enough. We’d rather if you have two or three people and you have worked together, and you're excited. Go try to do it by yourself before trying to bring in a business person.

One obviously is when a great technical founder joins with a business person that is not that impressive. That's frustrating. We love to brainstorm, and if the point of the meeting is to just brainstorm, then that's great. But if you're coming to the meeting because you want to raise money right now and you're not really prepared, what I mean by prepared is you don't know your market that well (that’s frustrating).

What does it mean to know?

You have spoken to potential customers. You have spoken to whoever is in the middle of the value chain and partners. You didn't just have a good meeting with someone, and they said, “If you had that, it would be really cool.” But they said you are solving a big problem, and they said, “Give it to me; make this right away.” That's what we want to hear. Know the customer, know the market, and then with the technology, really know it. So if you are going to talk about AI and machine learning, we will drill you to see exactly what you are doing, and a lot of times, we find out there is actually no AI required. We love to help companies or founders go through a couple of months of brainstorming before they raise money. Then we will help you think of how to prepare.

That's the real due diligence, the relationship you build over months.

One way that we short circuit the process in Israel, and this is where it is not fair. For those who do come from the units, we are able to very quickly figure out: What did your commander think? What did the other team leaders and soldiers think of you? Did you really work together on a project or just pass each other in the hallway? One of the great things about investing in Israel, it's essentially a small community.