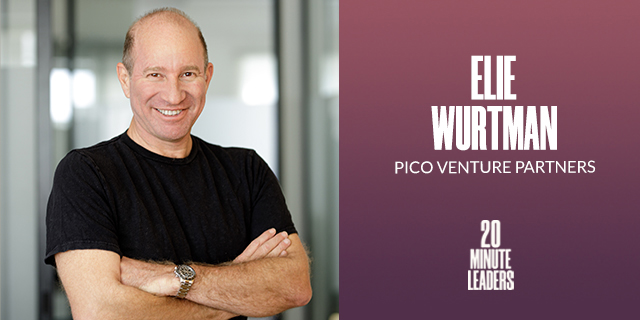 "Through technology and through innovation, Israel will build bridges to peace around the world”

Elie Wurtman, co-founder and partner at PICO Venture Partners, shares his philosophy on the importance of technology, startups, and Zionism

Elie Wurtman didn’t even know what entrepreneurship was when he met famous Israeli entrepreneur Stef Wertheimer in the 1990s. But Wertheimer set him on his path as a founder and venture capitalist by spotting his talent and sharing his philosophy on the importance of technology and startups to Zionism. It is something Wurtman has been living out ever since. He believes innovation will help Israel build bridges to the rest of the world and improve the economy to help create peace. Values are the focus of PICO Venture Partners, which Wurtman co-founded. He also began Bat Shlomo Vineyards to create great wine, preserve Israel’s history, and provide jobs for high school students. Education and Jerusalem are also his passions, so he founded PICO Kids to provide children in the city with needed skills while teaching values and identity.

You mentioned something really amazing yesterday about the Vroom Super Bowl commercial. I’d love for you to repeat it.

I'm actually sitting at the dinner table with my 15-year-old, and we're listening to Spotify and the Avicii song came on, “Hey Brother.” I realized that that was the soundtrack for a Super Bowl commercial I worked on with another startup I had called NJOY about eight years ago, and I said to my son, “It's pretty amazing to have two Super Bowl ads. One guy, two different startups, that must be pretty like a serious accomplishment.” I'm going to add that to my list of things and hopefully impress my 15-year-old son in the process.

You are also the owner of the world winning winemaker, and you also used to spend a day a week working from Amman, Jordan, which is also incredible. I have to dive deep into these two things first.

The secret to my success is being ideologically driven, and I have too many ideological passions, but one of them has always been that through technology and through innovation, Israel will build bridges to peace around the world. This desire to use innovation, to use creativity to create a better world, a better reality, more prosperous kind of economy is something that’s always driven me. In the late ’90s, I believed, together with some partners from Saudi Arabia, of all places, that we could build the largest IT services company in the Middle East. I commuted from Jerusalem to Amman, Jordan. I really believed that while we were building a business and creating jobs that also we were doing the most important thing, which was bringing people together, breaking down barriers. And this is, to me, the magic of being an entrepreneur: that we can take business ideas and business enterprise but also achieve additional goals that we have to make the world a better place.

Wine is one of my favorite passion projects. I commuted from Israel to Palo Alto, and I used to spend the weekends, and we would visit 10-12 wineries. I realized that there's a huge connection between high tech and innovation and wine. I had stumbled upon the place called Bat Shlomo, where Israel started. I said to my friend Ari Erle, “Let's bring the latest technology and build a great winery in Israel but also preserve the history, express our love for the land through organic, environmental farming practices, and engage in social impact.” We actually set up an educational program for kids who don’t like to go to school. They work in agriculture every morning, and they do their academic studies in the afternoon. It was my pride and passion, and I love getting together with entrepreneurs over wine.

Tell me a little bit about your connection to Jerusalem and why you're passionate about being there.

Sometimes, if I'm speaking to a public audience, I'll ask everybody, “Have you read the book Startup Nation?” Then I ask everybody, “Do you remember the chapter on Jerusalem?” There isn't one, and the unwritten chapter of Jerusalem is my belief about Jerusalem. Actually the hidden secret of the success of the startup nation starts in Jerusalem. There is something about this city, the complexity of the city, the history, the perspective of what it takes to build big things. When you look at the Old City of Jerusalem, you can see with your own eye 3,000 years of history. You say, “Hey, what is my calling, what is my layer of history that I am going to write?” I think that complexity leads to creativity, that just to survive every day in the city, we have to flex our creative muscles. I think all of these things have driven Jerusalemites, people from the city, to become the leaders of the high-tech industry. It is something in the identity that has both depth and vision and creativity and the desire to go out and do big things. I think there's some magic in this city that just pushes us to go further, and I'm a believer in the city, and I'm a believer in the people of the city. Whether you are from here or not, there is something magical that connects the whole world to the city.

You said it all comes down to this ideology of making an impact and being driven through that impact. How do you translate this very mature mind-set to young founders?

I'm very much a values-driven person, and I believe in values-based leadership, and we all have our own frameworks. For me, the framework was and is Zionism and what that means in terms of building a great society here, a values-driven society, but that you need prosperity to get there. PICO Venture Partners is about social impact, it’s about creating a better future, and also about creating great startup outcomes and embracing entrepreneurs. I believe, and I might be wrong, that entrepreneurs are drawn to us because of our values. Our commitment to building a better society, to creating more jobs, creating positive, positive companies, who can leave a positive mark on the world is part of what we represent.

I'm very fortunate when I was a soldier in the Army and I had no idea what an entrepreneur was or what high-tech was, I had the good fortune of going to an education week up north that was sponsored by one of Israel's greatest entrepreneurs, Stef Wertheimer. He had set up an educational program for Israeli soldiers to learn about the different populations in the north of Israel and about his vision of how we could all coexist to live together and we could build a green industry, high-tech industry. He talked about phase 3 of Zionism being high tech, which will lead to prosperity and peace in the Middle East. I encountered him in the early ’90s, and I have lived by his philosophy. I have lived that in my work as a high-tech entrepreneur, creating jobs, continuing in the footsteps of the pioneers, bringing economic prosperity to this land as an enabler to fundamentally create prosperity and peace in our region. It’s something which our entire industry is taking a part of whether everyone is aware of it or not. On the last day of this education week, they ran an entrepreneurship competition. My first confirmation that maybe I had what it takes to be an entrepreneur was Stef picking me out of hundreds of soldiers and giving me a prize and giving me this poster I still have on my wall.

Mission, drive, and a lot of heart.