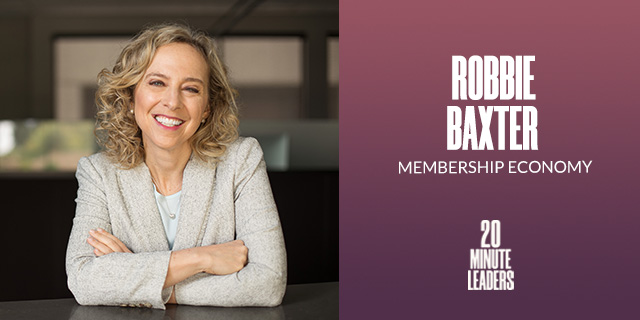 “Meeting people and exchanging ideas is what keeps me going.”

Robbie Baxter literally wrote the book on the membership economy after working with Netflix as a consultant and falling in love with their business model. She says the advantages of a subscription model include more predictable revenue and a better understanding of customers’ needs. Having to continue to market and sell to members puts more focus on the relationship with customers, and Baxter says it can spur ongoing innovation within the company. But companies who want to go the subscription route have to change their product to be a good fit. She says it is not enough to offer the same product or service you’ve been selling outright as a subscription. In the future, Baxter expects to see more companies aligning their rates to the value customers receive and more companies who focus on a core group of users and continue to add new layers of services. Click Here For More 20MinuteLeaders

Robbie, take me back throughout your journey, through Harvard, Stanford, and Membership Economy.

I studied poetry in college. My parents had always told me and my sister if we got into a really good liberal arts school, we could enjoy it and study whatever we wanted and that we’d figure out our career later. I have now three college age kids, and that's exactly what we told them because I think it was very good advice. But when I started working, I quickly realized that there were skills I needed. Then I went to Booz Allen to get some training, and they even told me, “You need some business school.” It was really helpful to get that training. I spent five years in tech as a product manager. I got laid off when I was on maternity leave, and that's when I started independent consulting. My fifth client was Netflix. I haven't really looked back since.

What is this idea behind the membership economy? What led you to even consider that it is a bigger picture idea?

It really started with that project at Netflix. I loved that they were so focused on doing one thing well, which I’ve come to define as the largest selection of professionally created video content delivered in the most efficient way possible with cost certainty. They had a member mind-set. They were focused on the long-term, and what they got from that is they earned the right to subscription revenue, and subscription revenue is like the holy grail for business. I was in love with the model, and I'm trying to take it apart. I kept pushing to try to come up with frameworks that were applicable across these different businesses because I saw how powerful the business model was at driving profitable revenue, predictable recurring revenue, helping companies understand their customers better, getting better valuations. I was surprised that not everybody saw what I was seeing, and that's why I wrote my first book, Membership Economy, in 2014.

If we're looking in the tech ecosystem during the height of the dot-com and in 2014, what are the key differences?

I'd been a product manager at a couple of different SaaS companies. In most of those companies, the engineer was king. The product was king. It was very much like if I drive a Lamborghini off the showroom floor, once I own it, it's my problem if I never take it out of first gear, not the company's problem. They've already got my money. But with the rise of subscriptions, suddenly, the product is no longer as important as the relationship with the customer. The company has to be willing to evolve the product around that customer’s needs. This membership economy was really about designing your offering for the people you served. They were the members, and you continue to evolve that offering based on what they needed rather than designing it based on what kind of product was exciting or fun to build or what you'd always built.

To sell the Lamborghini, you have one touchpoint where you have to make a lot of effort to sell it. With subscription models, you have to keep selling. It's a much harder sell, isn't it?

In some ways, it's an easier sell, and in some ways, it's harder. It's easier because the friction is reduced. Instead of having to spend seven figures to buy and then customize your enterprise software license, suddenly you can configure and subscribe. It’s a much easier process to see if you like it. The harder thing is you have to keep them if you want to hit that same revenue number. One thing that's important are the people on the team that can continue to engage that customer. On the product side, what becomes important is not just your headline features, but also your engagement and expansion features, which get them to make it a habit and share it with their colleagues. I think a big mistake a lot of companies make is they think that moving to subscription or moving to SaaS or moving to anything as a service is just about repackaging the product: same product, different pricing structure, different landing page, but it's the same darn thing. You have to redesign the product in order to be relevant and optimized for a recurring revenue pricing model.

It sounds like you actually have to redesign the whole structure of how you work on the product.

It's every part of the organization. It changes how you sell it, it changes how you compensate your sales team, it changes how you market your products because a lot of the marketing has to happen after that initial transaction. Changes customer support into customer success. It changes how you build the product itself. If you want your customers to trust you, to take off their consumer hat, put on a member hat and say, “I’m going to keep buying from you forever,” you need to earn it with an entire business system that supports that ongoing relationship. 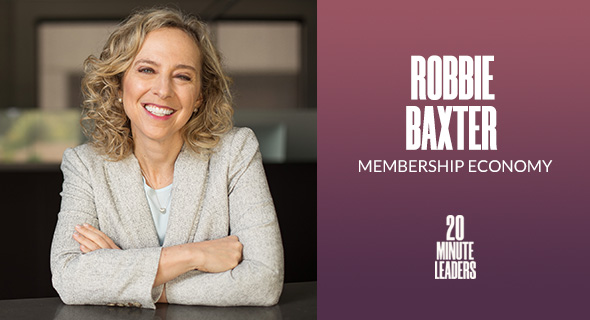 It seems a subscription model is better for an organization because it forces you to continue innovating, right?

It results in good business hygiene. You're always improving your product. You're listening to your customer. There is a dark side, though, Michael. It's also important to think about this because there's always this continuous swing from one end of the pendulum to the other. I'm sure that people are like, “I have a great idea. What if you owned it instead of subscribing?” One of the issues with subscription is you tend to get narrower in your focus. You want to listen to today's members but also need to be listening to tomorrow's members. That includes people who looked at your offering and chose to go elsewhere. That includes people who used to be subscribers, but have canceled. That includes people who are considering you today. And it also includes your existing members.

What can I be expecting in the next 10-15 years? Where are we headed?

What I think is really exciting is that organizations are doing a better job of aligning the value that the customers receive with the way that they're charged. If you buy a car, that might not be the ideal way to buy a bundle of value. You may not need the trunk or the passenger seat. A subscription to, let’s say, Zip Car allows you to unbundle those things. There are other ways of providing usage-based value, sharing economy value where we're sharing access to our stored value. Also, really optimizing your offering around a group of people. We're seeing in China, for example, a lot of businesses build a relationship with the customer first, and then they continue to layer in more and more value. First, it might be a chatting app, then a billing platform, and then a dating site.

I have a few fun questions. What was your favorite subject in school?

I loved the class with the best teacher, whoever that was. Some years that was English, but if I didn't have a good English teacher, I liked math.

Who is somebody you always looked up to?

Definitely my dad. The most conservative person I know, but he was willing to take these big career risks, and also, he's continued to innovate. He started a venture firm in his 60s.

It’s curious, motivated, and connected. Meeting people and exchanging ideas is what keeps me going.