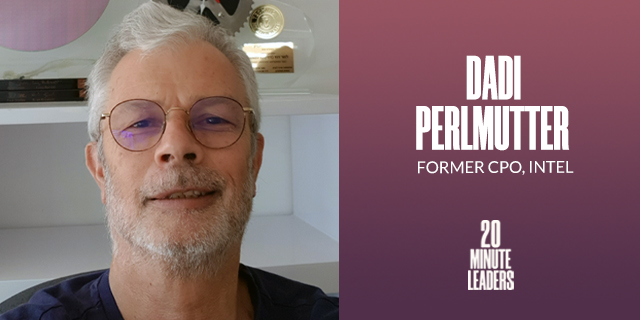 “If you want to change the world, one of the ways ... is to give opportunities for kids in school.”

Former executive VP and CPO at Intel, Dadi Perlmutter, talks to Michael Matias about the challenges of managing 35,000 people and how education can help change the world

There are many ways an entrepreneur can positively impact society, and Dadi Perlmutter, former executive VP and CPO at Intel, has been able to spark change both at large corporations and small organizations. From an early age, Perlmutter knew that he wanted to create something that would significantly impact the world, and though he initially planned to accomplish this feat within the field of academia, he ultimately decided to join Intel as an engineer instead. After more than thirty years at the company, Perlmutter changed paths and began to focus on his passion for philanthropy and education. As he notes, providing educational opportunities to children who live in underfunded areas has a huge impact on their potential for success. Perlmutter strongly believes that positive change can occur at all levels and hopes to continue to spark change within his community for years to come.

What is it like managing 35,000 people as executive vice president of Intel?

It's very difficult. And to quote Andy Grove, “When you manage something so complex, you have to influence people because you cannot talk to each person and change their mind.” You have to be influential, so for example, be precise and concise about what you say and how you say it.

What are the difficulties and the challenges of running 35,00 people?

It’s a huge difference from managing five or six person teams. I realized that most of the people, other than people that work closely with you, have an impression of who you are that may or may not be exactly who you are. My leadership style is open and direct. People know I mean what I say, and they don't have to second-guess me, which makes it easier for them to understand what I'm talking about. And you show by example.

Yes. I believe that a good leader is not one that does not make a mistake but one that admits openly about the mistake, learns from the mistakes, and directs a new course of action. The whole Intel notebook, the Centrino program, was based on a failed program that was codenamed Timna. It was a big failure and then a huge success. It was the foundation of what became the core. At that time, only 50% of people used notebooks, and today 90% of people buy notebooks when they use a personal computer.

When you joined Intel, did you have an aspiration to go and spend over 30 years at this great corporation and rise the ladder of success to be one of the executives?

No. I came to Intel as a compromise because what I wanted was to be an academic; I wanted to be a professor. I wanted to go do my master's and Ph.D., but we had to get financially stable first. We decided I’d work at Intel and continue my studies. But I never finished my master’s degree. I instead spent 34 years at Intel, but every three, four years was a completely different journey.

It was a simple transition for me because, in both roles, I’m pretty much doing the same thing. The one thing that eventually got me to stay at Intel is because my dream was to make things that change the world. And I believed computing and technology could be used for good things. Later on, my wife and I decided that we'd devote a big portion of our time and all of our philanthropic investment into social entrepreneurship, predominantly in education, closing social gaps, giving opportunities, or making communities closer. I'm also chairman of a non-profit that deals with bringing the Arab community in Israel into Israeli high tech. So, it's all the same. People are different, but it’s all about working with people with motivation to do great things.

As a young entrepreneur, what are some of the things I need to understand better about my society? And what is my potential role as a leader when it comes to social responsibility?

We picked education because education is life-changing. If you want to change the world, one of the ways is to give opportunities for kids in school. So one of the organizations that my wife and I are involved in helps schools in low-income neighborhoods. And it's amazing how a smart team of people with relatively little money can boost their academic success from 20% to 80% and even 90% in three, four years.

What is the changing factor?

First, it’s about having the right people on your team. The organization brings a set of volunteers from high tech business. And the volunteers tutor these students in math and help them study so that they can pass their examinations. The pedagogic team also comes in and does a deep analysis of the school, not just the pedagogic and academic successes but the social situation, the level of the teachers, the teamwork between the schoolmaster and the teachers, and the social situation at home for these kids. And from this analysis, we collect a lot of data, which gives us a better understanding of the school and all its components. The schoolmaster also has a mentor, who they can call for help. And we give money, but not much. But you don't come as a consultant. You come and you say, "I'll help you implement the plan you create."

So you're used to making decisions at scale, overseeing an operation of 35,000 people, but now you’re focused on a single school and influencing a small number of kids. Is that shift intentional?

Well, I'm also chairman of two startups and I'm an investor in a few others, so my day is full. And scale is still an important component of what I do. When my wife and I joined, we dealt with about seven or eight schools. We're now dealing with 40, and the goal is to influence the minister of education to change her mind, because at the end of the day, in Israel, there are about 800 to 1,000 schools like this. So, 40 schools is a drop in the ocean. Nonetheless, every kid matters, so it's not a small deal. But with every non-profit that I work with, it’s about scale, not just the one person. Nevertheless, the one person is still extremely important.

Israel is not a startup nation, but there is a nation within Israel called startup nation, which is about 9% of the people in the country. My job, talking just about education, is hopefully to turn the whole of Israel into a startup nation. I don’t mean that everybody works on a startup and inventing technology, but the world is becoming more based on technology, and people who are not technology literate are not going to be able to succeed in this world. In Israel, we’ve been spurred by impatience, the wanting to do things better, wanting to do things differently, not being confined to the box, and its success can be attributed to combining camaraderie and the drive for personal success. I’ve seen cultures go either on the camaraderie or the personal inspiration, and in Israel, the combination is quite unique but difficult to explain. How can you be driving your personal success? It never will be at the expense of the team. That’s one of the reasons for success.

What three are three words that you would use to describe yourself?

I'll tell you what my father used to say when I was a kid and he asked me to walk in our garden to do gardening, which I hated. He said, "You are an ambitious, lazy person. You are thinking of how to do things easier."