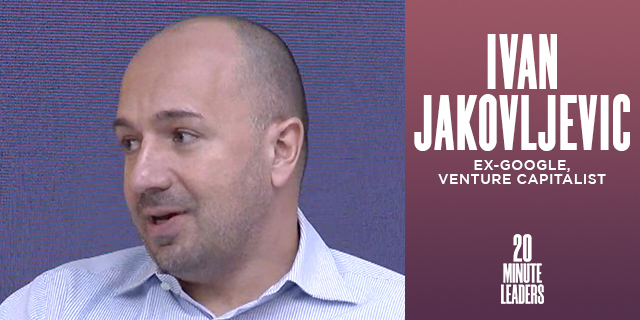 "Dubai is a true melting pot. It's like 190 nationalities."

Ivan Jakovljevic, former chief development officer at STV, talks to Michael Matias about his journey from Serbia, to the US, and now Dubai

There are several reasons why Dubai has not seen much startup activity in the past, but Ivan Jakovljevic believes the field is poised to see exponential growth soon. He left his job at Google to join STV, the largest VC fund in the Middle East and North Africa region, because he didn’t want to miss out on the chance to participate in the growth. Jakovljevic says the diversity of nationalities in Dubai is helping people of different cultures learn to work together in business. When you are used to encountering other cultures, he says, you are more likely to give the benefit of the doubt over differences even when you don’t understand them. Jakovljevic himself is originally from Serbia. He went to the US for grad school and did consulting there. He then moved to the Middle East temporarily, but has never left. The following interview took place in January 2021.

Ivan, you've done Stanford Business School. You’re originally from Serbia; you spent many years at Google. How do you end up helping run investments and portfolio companies in Dubai?

Short answer, by chance, obviously. I'm originally from Serbia, so I moved to the States to do Stanford Graduate School of Business; that was back in 2006. After graduating, I joined a consulting firm and moved to the city of San Francisco, and I thought I found my American Dream. In 2008, there was the global financial crisis, and the firm that I was with at the time was looking for people to move temporarily to the Middle East. I thought I would go for a couple of years, make some tax-free money, repay my student loans, and before I knew it, I was going to be back home. Fast forward 12 and a half years: I guess life is temporary as it is, but it turned out to be a little bit more temporary than the original two years idea.

You spent quite a long time with Google, helping them expand into the Middle East and North African markets. What was that like?

We talk about MENA, which is the Middle East and North Africa region. A lot of people talk about it as a kind of a region, which is relatively uniform. In reality, it's anywhere between 19 and 21 countries, depending on the day, depending on who does the counting, which are actually very different. We sit here in Dubai, which is part of the United Arab Emirates, one of the richest countries in the world. Another country in MENA is Egypt, with more than 100 million people, but it's actually more in the range of developing countries. It’s a very, very diverse region that actually needs a lot of different recipes, if you will, to be “cracked” for business. My assignment was to kind of bring everything that we were able to build here in the UAE and take it further out to the rest of the region.

For every region, it's not just about the condition of the technology, but it’s also about the culture. There's a lot of different subtleties that you really have to take into account.

In terms of how you do business, in some countries of the region, the working culture is much more face-to-face; there is no way for you to do business unless you have first established a relationship. A lot of times, we think about the way that we do business in developed countries that is an efficient way. We'll just jump on a call and get things done. That's not typically how things work in a lot of other countries in the region. You need to be sensitive to all of these nuances if you want to be successful.

Do most people fail at that or do most people understand and make that quick adaptation? How do you expect people are going to adapt this more business mind-set between two sides in the next few years?

I don't know how well known that is outside of this region, but Dubai is a true melting pot. It's like 190 nationalities. Out of three million people in Dubai, less than 10% are UAE nationals. The fact that it is a melting pot gives rise to this being kind of attuned and more sensitive to the fact that the person sitting across from you in a business meeting is not going to be like you, from a cultural point of view. So you may not necessarily understand their culture, but you're going to be naturally more attuned to better understand that it is different from yours and give them the benefit of the doubt and not necessarily jump to conclusions and learn a little bit more about how to be effective and how to establish those relationships.

How do you explain what we're seeing here? Why is Dubai this crazy melting pot?

The way you think about Dubai is not even related to the MENA region. It is kind of the headquarters or the hub of a very, very broad region, which actually comprises almost 2 billion people. In 1971, they built what became one of the largest ports in the world. At that time, Dubai was more like a fishing village with like 50,000 people, but there was a vision to say that from a geographic point of view, it is a hub that is logistically and distance-wise within a seven- to eight-hour flight radius to more than 2 billion people. So, it's a good place to put a port and it turned out to be the case. It's a good place to actually put an airport in. If you then think about the broader region that Dubai covers as a hub, you have places like India, Saudi Arabia, Iran, south and eastern Europe, even the CIS countries. They all kind of somewhat naturally gravitated towards a place that has established itself as not only a logistics hub but also a hub that is very convenient and very safe to do business in, from a security perspective but also a regulations perspective because they've put in a lot of a very solid regulatory framework around it.

If you look at this whole region, what's going to happen 20 years down the line?

It's anyone's guess. I think for the vision from the pre-Covid world, we're probably not even 30% there. Emerging markets are the ones that are kind of up and coming. We can provide them with talent, technology, financial and regulatory framework; what London and New York are for the rest of the world, Dubai aspires to be for this part of the world. If you think about what is happening in Africa, at some point if those economies start picking up, Dubai is perfectly positioned to leverage and profit off of that.

I have to understand a little bit about the tech ecosystem with investment. What's happening here in terms of technology?

The market here from a startup point of view is super nascent. There are a number of reasons for that. I think one of the big reasons for that is that the economy here historically was essentially driven by large organizations. The sentiment around starting from the ground up and having this kind of entrepreneur mind-set, that wasn't necessarily present. The regulations were not supporting it either. The culture was not supporting it. We see failure as kind of a learning experience and something you are proud of. In this region, failure was associated with negative connotations. All of this is changing, and all of this is changing super-fast. The reason for me to actually move from Google to STV is looking at that super nascent opportunity. What I was telling myself was, “Do I want to be there not only to witness it but potentially participate in it and enable it?” The clear answer was yes. I was probably too late to do that in Silicon Valley back in 2006. But I think I'm probably not too late here because it's just starting, and I wanted to make good use of that.