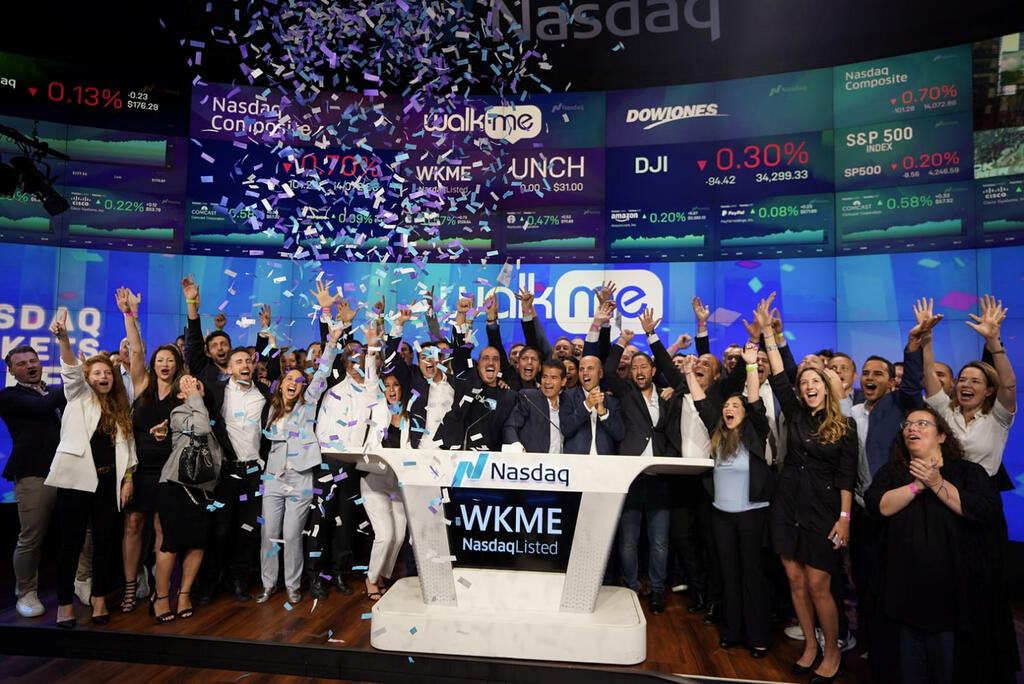 WalkMe became the 85th Israeli company to currently be traded on Nasdaq and NYSE. The market cap of blue-and-white companies on Wall Street has surged by $100 billion since the start of the year

Software company WalkMe’s IPO on Nasdaq on Wednesday brought the aggregate value of Israeli companies traded on Wall Street to $300 billion. According to data gathered by Oppenheimer Investments Bank, there has been a $100 billion surge since the beginning of the year, $75 billion in new companies that have either gone public or merged with SPAC companies, and a $25 billion increase in the value of existing companies. 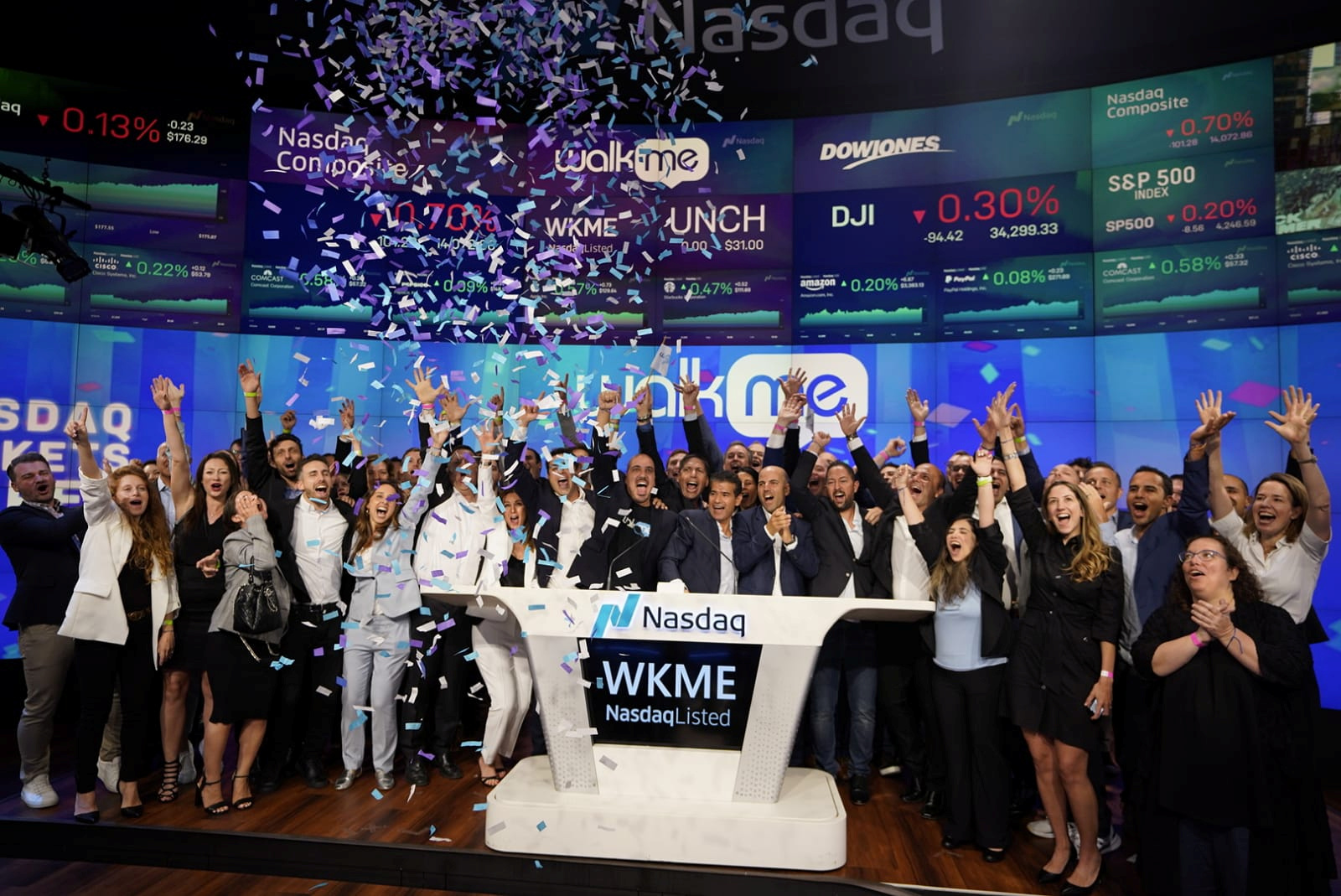 The "Israeli" portfolio in New York, which includes 85 companies, recorded an increase of more than 12% since the beginning of the year - more than Nasdaq, which recorded a return of 9% since January. This leap in the value of Israeli companies traded in the U.S. means they have surpassed the total value of the 507 companies traded on the Tel Aviv Stock Exchange (52 of which are traded in both), which stood at NIS 962 billion (about $297 billion) on Wednesday. “What is happening with the large IPOs of Israeli companies on Wall Street is exactly what the Israeli economy needs. It creates long-term growth, as the companies expand," said Avivit Mannet-Kalil, co-CEO of Oppenheimer, in a conversation with Calcalist. "It is also not similar to what happened in 2000, because these are mostly companies that work in the established and healthy SaaS model, which provides the ability to assess and anticipate ahead. The only exception is the electric and autonomous vehicle segment, which is more futuristic and similar to drug development because after years of development, technology can catch on and make the company huge, but it can also fail.” How long can this party last? “There is a lot of money in the market, and interest rates are low. It is a wave that can last two or three years because there is new money coming into the system and there is demand for these companies, but there are cycles - and at some point, it will calm down." For now, the market seems to be staying hot, so Israeli companies that come to Wall Street enjoy a strong back wind. Monday.com, Israel's largest IPO to date, went public last week at a value of $6.8 billion, but is already trading at around $9 billion. WalkMe joined the club on Wednesday, raising $286 million at a value of $2.5 billion. WalkMe concluded its IPO, which was led by investment banks Morgan Stanley, Goldman Sachs, and Citigroup, at a share price of $31, right in the middle of the underwriters’ range. The share is being traded under the symbol WKME. WalkMe was founded in 2011 by Rafael Sweary (49), who serves as the company's president, and Dan Adika (35), who serves as CEO. The company has developed a platform for adopting digital technologies without the need to write additional code. The concept behind WalkMe’s solution was to help organizations measure, promote and act in order to maximize the impact of digital transformation processes, thereby improving the efficiency of the software the organization uses. WalkMe's products are used by both the companies' employees and their clients. Today, the company has more than 2,000 customers, including 155 Fortune 500 companies. Like recent Israeli companies who went public in New York, WalkMe also operates in a SaaS model and therefore grows rapidly, but also loses quite a bit. The company concluded 2020 with $148.3 million in revenue, a 41% spike compared to 2019. However, its operating loss amounted to $43.1 million, which led to a bottom-line loss of $45 million. The company ended the first quarter of 2021 with an annual revenue rate (ARR) of $178 million. In the quarter itself, it reached revenue of $42.6 million, a 25% growth, and a loss of $13 million compared to $12 million in the same period in 2020. WalkMe was one of Insight Partners’ first Israeli investments.Insight holds 28% of WalkMe directly and 9% more through the Gemini fund which it purchased a year ago. Other WalkMe shareholders include Vitruvian Partners, Mangrove Capital and Greenspring Fund. To date, WalkMe raised $300 million and was valued at $1.8 billion in its most recent funding round. The two founders arrived at the IPO with fairly small stakes, with Sweary holding 2.4% and Adika having a slightly larger holding of 2.6%, both worth around $60 million. "The IPO, for us, is a marketing event. Even before the fundraiser, we had more than $100 million in the coffers, so the purpose of this move is to create awareness of the category in which WalkMe operates, which we actually invented," Sweary said in an interview with Calcalist Wednesday, shortly before the start of trading. "This is also the reason why we did not go public via a SPAC merger. When you go public using a traditional method you get great exposure to U.S. institutional investors and analysts, and they start researching the category. In general, SPACs are also good, but not like IPOs," Sweary added.