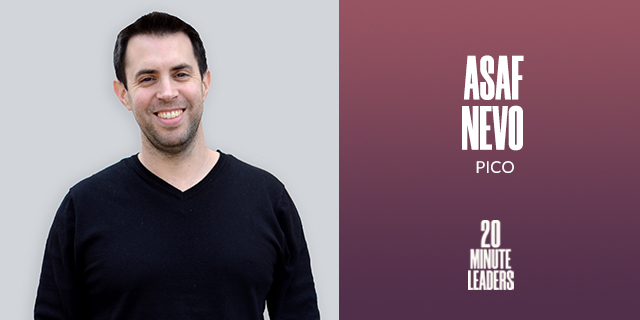 “I think optimism is one of the key factors you have to have when you do entrepreneurship.”

Optimism and resilience are key factors in any entrepreneur’s journey, Asaf Nevo shares with Michael Matias

Optimism and resilience are key factors in any entrepreneur’s journey, Asaf Nevo shares. He lived these out when he did not let the failure of one technological idea in the nightlife industry keep him from moving forward. His newest venture, Pico, helps brands and sports teams understand their fans. Nevo says the relationship between fans and teams has been one-sided, with passionate fans and teams who don’t know them. By collecting data that fans love to share, Pico can give teams a better picture of who their fans are and what they love about the team. Sports is a big vertical for Pico, but it isn’t the only one. They are also helping brands who sell to retailers get to know their end consumer. This will help create more effective marketing as companies of all kinds understand their fans better.

Take me back to your nightlife days.

When I started my journey in nightlife, I was a super geek. What really burned inside me was the need to open a place that was clean, working with all the required regulations, with insurance, and paying the employees as needed, to prove first to myself, but also to the world that the cliche about this type of business doesn't have to be. There is a way people look at nightlife businesses, a stigma on people who run nightlife businesses. We really try to break it and show that this is a legit, successful, big economic business.

How did you leverage your tech expertise to try and make it more successful?

My very first company was, when I was 15, I started to build websites. I wasn't such a good student, and I really like tech. I kind of taught myself how to program. When we started the bar, we really wanted to focus on the business side first and then all of our tech-savvy expertise came into play. We started to think, “How can you make it efficient?” One of the biggest problems in the nightlife industry is when a keg runs out and you get this explosion. Everybody gets messy, and there's a lot of beer going to waste. We found that there is this tool, and we installed it. We immediately saw a huge drop in the amount of beer we had to spill down, and then we said, “What if we put flow meters on? We can actually measure how much beer of every keg we are using. We can then recalculate all of our business mechanisms better.” Now that we know exactly how much beer we poured, why don't we give the power to the customers? Why don't we let them pour the beer and then pay for exactly what they pour? We went over to Coca-Cola and said, “We have this cool thing we've built. Why don't you fund that?” That was our first bar nightlife-related technology. By the way, it failed, it didn’t work at all, but it was a great experience working with Coca-Cola.

Now you’re integrating technology with sports in Pico. What is your insight into the sports and extreme fan industry that you said, “I think there's room for something like that”?

First of all, it's not sports only. We are also operating in other industries. But let's focus on sports because it's one of our biggest verticals. Pico is currently working with 60 professional sports teams from around the globe. I think the one thing we pretty quickly noticed is that there is a big gap, and the gap is more an emotional one. On one side you have a fan who is doing everything to get in front of the team he loves. They spend a lot of their energy and time on being part of this brand. On the other side, there is a sports team, which doesn't really know the fan. At the end of the day, if you ask most sports teams, “Do you know which fan likes which player in your team?” They don’t. We say that doesn't make sense. I had a relatively small business, and we did a lot in order to gain data about the people who come to the bar, and there is almost zero emotional connection. Here there is such a deep emotional connection; people could like a team from the day they're born to the day they die. The sports are so focused on the engagement and creating the content. Because mostly they don't have the expertise, they didn't spend time understanding who you are.

How do you go about helping teams get insights into their fan base? How do you take that black hole and make it as transparent as possible so that they can take action?

Transparency is important. When we are gathering data and helping teams understand their fans better, fans also know that we're doing that. When fans share data with us, they do that in a way that they know that this goes to building the relationship with the team. The way we operate is we build a suite of tools to identify the fans who are engaging and then progressively add data about them. Then we use these data points in order to create this profile, which is then connected to build a better marketing campaign. We're looking at the team’s digital channels. What's most engaged by fans? We take this content, and we're attaching experiences to this content, like fun things to play. This experience is built by Pico, and it will always be engaging.

As a fan, what is my interaction with Pico?

First of all, you don't know Pico exists because it's embedded inside the channels of the team. You will see a Facebook post, a tweet, a section of the website or notification on the app saying, “Who do you think is going to score tonight? Click here to vote.” You click it, you start a game. You pick, it ends, but during this game, we will ask you, “We are giving away a jersey to one of the voters. How do you want us to announce that?” Now we have your email, and when we asked, we would say, “Would you allow us to use this email to further communicate with you?” If no, that's fine. The second game you play, we already know your email. Now we will ask you, “If you're going to get this jersey, which of the players would you like to sign it?” Then you pick it, we know your favorite player now, and so on. This was a very rough example, but the idea is that we are engaging with fans in ways that allow them to share information in an ongoing conversation. This process brings in a lot of data because fans are very happy to share. The second step is to take these data and normalize them in a way that we can have real recommendations to the team. As an example, the Los Angeles Lakers. We say, “You have 30,000 fans who expressed an interest in a jersey, and their favorite player is LeBron. Let's send out a marketing campaign to them, ‘Michael, here is the jersey of LeBron you wanted; click here to get a 20% discount.’”

This is not just relevant for sports but for any brand that wants to make meaningful connections. What's remarkable here is that there's actually a lot of friction for people to be really fans.The teams have a hard time giving those opportunities. You just go in and facilitate that behavior and now say, “Can we extrapolate this behavior to other brands?”

Exactly. It’s entertainment compared to other markets because music has the same problem as sports. If you like Justin Bieber, you follow him, watch his videos, but he doesn't know you exist. The difference between sports and entertainment compared to other industries is other industries will pay a lot to get the traffic sports gets for free. We want to have high engagement rates. The technology is about operating in spaces where there is a lot of engagement. Another market we're looking at now is consumer packaged goods companies like Nestle. They're not selling to the end consumer. Nestle has no data about me. But they are spending a lot on creating digital engagement. They are now starting to use our technologies in order to create engagement that really drives data for understanding who the users are and their preferences.

It’s a builder, optimistic, and resilient.