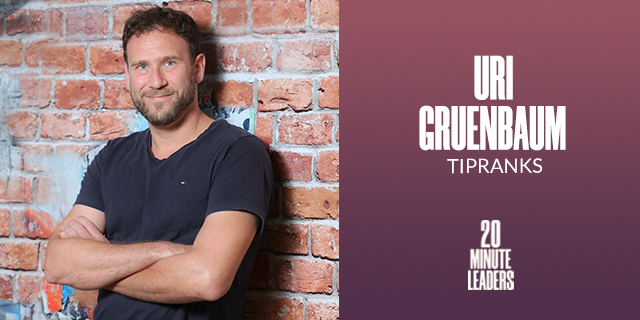 “I think if I had to give one tip to entrepreneurs, it is to be grateful."

One of the keys to successful entrepreneurship is being grateful, according to Uri Gruenbaum, TipRanks co-founder and CEO. He says the entrepreneur community is usually very willing to help each other out, but it is important to express your gratitude for that help along the way. Another crucial factor to success as a founder is being able to get along with a variety of people and being able to share your vision and motivate them, Gruenbaum shares. He has met and lived with a lot of different types of people on his journey from Jerusalem and San Francisco to boarding school in Sde Boker and his Air Force service. He believes those experiences gave him an advantage when it came to starting TipRanks, which provides performance data and track records of investment analysts and bloggers so investors can judge if their advice is likely to be good.

Tell me about your journey.

The journey involves a lot of things that I've done before. I was born in Jerusalem. We moved to San Francisco early on. Then I moved to a neighborhood near Jerusalem. As we grew up, I started working. I worked at construction, a bookstore, an ice cream shop. I basically gained a lot of experience doing a lot of different things.

When I was in high school, I moved to Sde Boker because I have a lot of passion for animals, country, and traveling. That was probably one of the most fun parts of my life. Anybody who ever visited Sde Boker can probably agree that it's the most beautiful place in Israel. The best thing about Sde Boker is the people that live there. They have such high morals. It was such an experience to meet people that are so different from how I grew up. I took a lot of things from my experience over there: living with people in the same room 24/7 and learning how to get along with people so different from you.

When I left Sde Boker, the last thing that I thought about was high-tech. In the early ’90s, there was a movie called Sneakers with Robert Redford, where they hacked all these places. I remember seeing that. That was probably the first time that I was really thinking about technology. After school, I started at the Air Force. I tried being a pilot, but I was moved to a drone unit. That was such a fun thing. You get to see so much interesting stuff, and you are involved in unique operations. That was probably the first time that I had access to real technology, where you have to learn and understand how things work.

After that, I traveled a bit and went to university. Because I did not know what I wanted to do when I grew up, and you might say that I still don't know what I want to do when I grow up, I went to study computers; I thought that it would help me find jobs pretty easily. In university, I also met my other co-founder. I took a course in entrepreneurship. I got to meet a lot of established entrepreneurs that gave us presentations, and it was really motivating. Since that course, 20 years ago, it was in me.

I grew up in a place where entrepreneurship is sort of your second word as a child. Entrepreneurship doesn't seem like it's a center point for you on your journey. How do you perceive that?

What I think that the average entrepreneur needs is to get along with people; to motivate them; to share your dreams; to dream big, of course; and bring everyone with you as it's the ability to convince other people, and it's the ability to be grateful. When you're an entrepreneur, you usually have a lot of people that will just help you out. These are things that I've learned in Sde Boker and high school, how to get along with basically anyone. Then of course, in the army as well. I feel like I really took that with me. I was able to channel that to create a network, to meet with other entrepreneurs, and to help sell our product.

That brings us to TipRanks. Tell me about the founder journey. What is the essence of TipRanks?

When we started the company nine years ago, the gap that I found was that there was no one to tell you if the investment advice you're getting online was any good. The vision of the company was that we will have something sitting on your browser and you're going to get a report about whoever is writing the story and how accurate he is. It was very difficult to scale or monetize a browser add-on business. Two years after, we did a complete pivot, and we moved into being a website. We took a very big bet, but it paid off. It took us some time to get the first users. Over time, we took it from a few thousands of monthly users to a few hundreds of thousands, and now to a few millions. We expect to get to tens of millions of monthly users.

As you're seeing this growth, how do you change as a company or as an individual?

When we started, we were like the real cliche of a garage startup. I was stressed all day long. I couldn't go to sleep. I wanted to see that we're meeting our ambitious goals. But we really enjoyed it, so we didn't care. We understood that we're building something great.

Now we are much bigger and we're profitable, the things that I'm looking at are very different. When we started, I did everything. Slowly, you're bringing more people and you're delegating your job, and that allows you to spend more time on creating the vision and looking at the big picture down the line. I'm much less stressed than I was a few years ago. I still enjoy what I'm doing, I think at the same level, but it's different challenges.

I feel very lucky to have the privilege to go through all these phases. When we started the company, we thought it would be a two-year thing. We thought after two years we would either sell the company or we would know if it makes sense to dedicate our life to this. But there is no urge from anyone, including our investors, to even think about exiting this.

How many people are at TipRanks?

We are 66 employees, and we are recruiting. I believe that we will pass a hundred employees by the end of this year. We used to be so small and you knew everybody. Now nobody knows who the other guy is. It's just a phase companies need to go through. Like accelerated growth, not just with the product, but also with the team.

I wish that when I’m leading a fast-growing company, I'll be as calm and grounded as you are.

You will because you don't have any other option. You can't afford to be stressed anymore. At the beginning, you need to take care of two, three fires every day. You're running around the fire thinking how you can solve it and if that will kill the business. But as you grow, you understand that you need to take care of 50 fires every day. You get to a place where you can't really stress about everything because you don't even have time. When I reflect about the times that I was completely depressed about things going on, these were probably the best times of the company. That's where we grew the most.

I have a few fun questions. Favorite subject in school?

It changed over time. In school, all I liked was gym. But the subject that I really like, and wish that I'd liked back then so I could enjoy it a bit more, is physics.

If I had to choose the one person that I think would be the Leonardo da Vinci of our time, it is obviously Elon Musk. Nobody's making a bigger impact than him.

Three words that you would choose to describe yourself?

I'm a kind and good person; I like helping. I am grateful. I think if I had to give one tip to entrepreneurs, it is to be grateful. Thank people that help you during the way because it goes a long way. The third probably, happy.