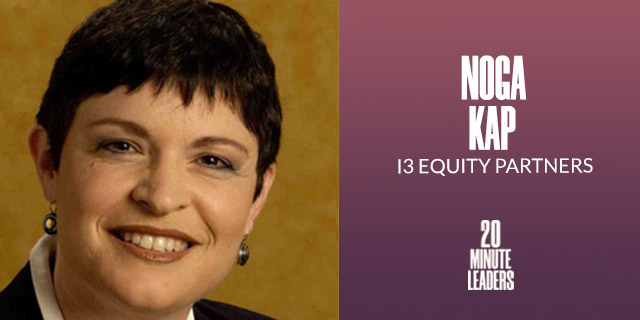 “We are helping them early on to do as few mistakes as possible.”

Listening to others’ ideas is very important for founders and CEOs, says managing partner at i3 Equity Partners, Noga Kap, when talking to Michael Matias

Listening to others’ ideas is very important for founders and CEOs, according to Noga Kap. She experienced this firsthand as a young engineer who came to her employer with an idea that wound up changing the company’s trajectory and brought much success. Now as a managing partner at her own VC firm, i3 Equity Partners, Kap encourages the founders she works with to bring on the very best employees and listen to their ideas. As an investor, she enjoys working with very early stage companies. At these early stages, she focuses on finding entrepreneurs who she has chemistry with, who want her help, and who are willing to be transparent. Kap says i3 focuses on deep tech that will disrupt markets, and she and her partner draw on their experience with multinational corporations. She is passionate about helping young ventures avoid mistakes and create the DNA of the companies. Click Here For More 20MinuteLeaders

You're the managing partner at i3 Equity Partners. What were the big milestones in your journey?

My journey started as a system engineer. I was actually a chutzpah type of person as a young engineer and suggested a different way of looking at the company, called Mint. I think that my inspiration is entrepreneurship.

I'm not an entrepreneur, although I'm very much into it. But I was at the time. I didn't know to call it that, but I was coming with an unbelievable idea that completely changed the whole company. I moved on to executive positions and opened the first office in Europe. Then SunGard offered us an offer that we couldn't refuse. We decided to move on.

I moved to the venture business. Going back to Israel, I joined Walden VC in their Israeli office. Then I started my new venture as a venture capitalist.

You went from working in the company to being a key player, and it seems like it's overnight. But it can't be. Share what that journey was like.

I think that you need the right environment and the right people around you in order to make it happen. There are people who shy away from saying, "Listen, what we do is great, but we can do something even greater." That's what happened in my case. I came across a new concept of the Swiss National Bank that wanted to change the way that they interact with the local 650 banks. I came to the conclusion that what we have on-hand is one-to-one of what they need, except that we don't understand anything in financial institutions.

I came back to our headquarters and told them, "Listen, what these guys are doing, this is going to conquer the world. Let's go and do that." They told me, "Great idea, but do it by yourself." I joined the Swiss National Bank task force in order to embrace and explain the way that we will do that.

A critical piece here is that trust. It requires a lot of trust for them to give you that responsibility. Right?

Absolutely. There were lots of discussions around it. The whole process was like one and a half years. We took everything on board and just developed from scratch what was required. I was the first to implement it in the local banking industry. Thereafter, it was clear that this is really the new direction of the company. It was really a great success.

That's what they call entrepreneurship, but you really need to listen to people. That's true also for my companies at i3. I would like the entrepreneurs, CEOs, and founders to recruit top-notch people. Some of them are maybe better than the founders, at least in the subject they cover. Let them come to you and be sure that you are listening to them in order really to take the right direction whenever it's required. Just listen to great ideas that come from people that know so much.

Why i3 Equity Partners? What is it?

This is the first fund for me and my partner, Eran Wagner, that we established ourselves. It's a startup. There are three things I would say that characterize what we do. First of all, we are devoted to super-early stage. We're really the first money in the company. Of course, we are choosing significant market opportunities and absolutely great entrepreneurs, but we would like to be there first when things are still not absolutely clear. There is a lot of work in the first 18 to 24 months together with the entrepreneur to build the company the right way.

The second one is deep tech. We are looking at science and technology-based foundations, those that are coming from academia. They're really focusing on the deep technology, which really disrupts many different markets.

The third thing is definitely our connection to multinational corporates. Both Eran and I are super experienced. We bring a lot of value with these connections. In our first fund, actually those are our LPs, including organizations such as Microsoft, Qualcomm, GE, Tata, and Temasek.

Let's say you meet a fantastic team and you invest. How do you even know as an investor where you should inject yourself and not be overbearing?

First of all, obviously we select and cherry pick the cases, and you need some chemistry between you and founders. As soon as you find that these people really appreciate what you can give them and are willing to work with you, that's the first step.

If we have a weekly meeting that they always attend, that speaks by itself. In many cases, we have a call once a day, at least in the first year. Those calls are coming from them to us rather than the opposite. We are not imposing ourselves on them, but we are helping them early on to do as few mistakes as possible. We all know that young startups will go through pivots and changes. Building the DNA early on, not to get panicked, and to do the right thing at the right time and be as efficient as you can, that's my passion.

How do you go about cherry picking those companies? If you have to picture what are the things top of mind for you, what would they be?

It's all about people, especially at the very early stages. One of the things that we do heavily is due diligence on the person, then being completely transparent, being able to share the difficulties, being able to share what's up when things are not necessarily going the right direction.

We are following the environmental, social, and governance guidelines, and that's super important for us. We would like to see that we are taking on disruption in an existing market. With such early stages, there is a chance it will be zero. But if it's successful, it can be huge.

We would like to take the risk as the first money in a company. We know that. Our LPs know that. But we assured them that we are able, at least in these early stages, to bring these companies from where they are, which is pre-seed usually, to the seed and to the A-rounds a hundred percent of the time. In my background previously, all of my companies went all along the processes up to the later stages.

You're a serial entrepreneur because every week or month you start a new company basically. What part of the company-building phase gets you most excited?

It starts with the very early discussions after the post-investment with the entrepreneurs, laying out the business plan. We have to take it and break it into the details. Product is super important. Many of the companies kind of disregard the product at the very early stages and leave the function that is called product or VP product to a later stage. We would like to see them early on bringing someone on board or having their minds into the product. Product-market fit is the thing that will make or break a company at very early stages.

I have three questions about Noga. Your favorite subject from middle or high school?

Biology. I was supposed to be a vet, actually.

Who is a role model?

Eyal Waldman of Mellanox. I was, I think, the first Israeli investor that backed him many years back. The journey together with him, especially his management skills and his spirit—unbelievable.