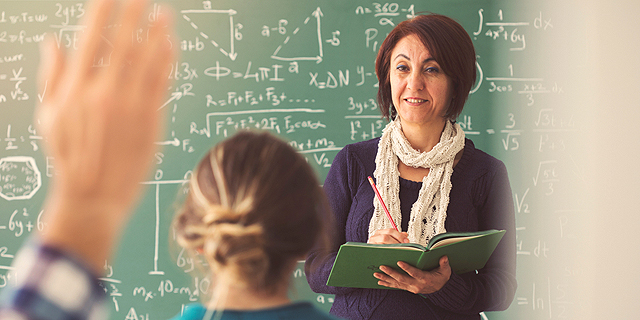 The goal: preserve the high-tech industry’s contribution so it continues to grow while avoiding widening social gaps. The solution: Excellent education for all

High-tech is the best thing to happen to the State of Israel since David Ben-Gurion. Technology has turned us from another dust-covered, conflict-ridden land into a country with one of the highest GDPs in the world. It happened thanks to impressive human capabilities, and without government intervention, and it's worth a lot of money. High-tech workers, a total of 10% of the labor force in the economy, provide the state with a quarter of its income tax revenue and are responsible for half the exports.

High-tech is one of the most prominent sectors in which the formula "learn - succeed" is valid Photo: Shutterstock

And yes, they are also the new rich. The high wages, the bonuses, and the stock options are enjoyed, thanks to the industry, by more and more people. The well-off class has grown throughout recent years thanks to technology companies, but during this past one, a significant leap was felt. Therefore, high-tech is not only good for the State of Israel, but it is also good for many of its citizens. More and more Israelis are enjoying a boost in their standard of living. The thing is, this population is too homogeneous. You don't have to be an expert sociologist to see this, it is enough to walk around in the afternoon around the restaurants across local tech hubs such as Herzliya Pituach, Matam Park in Haifa or HaArbaa Street and Sarona in Tel Aviv, and watch the high-tech workforce who go out to eat. They look similar everywhere, almost identical to the intelligence soldiers serving in the IDF’s technology units that are eating lunch in army bases. These are the same people, just their age and attire are different. In other words, those who enjoy the abundance that the high-tech ecosystem provides are mostly men, mostly of a certain ethnicity, mostly had a specific military service and a very specific childhood. Looking past the often discussed under-represented groups in the industry, meaning women, Arabs, and Ultra-Orthodox, there is a much broader exclusion at play. Those who were not raised in high socio-economic communities, mostly around the center of the country, with good schools that have already carved a path for them into military technology units, are unlikely to enjoy this new expansion of wealth. Yes, the industry rewards talent and enables rapid social mobility; However, most Israelis cannot cross its threshold. Those who reach the top quickly are those who were not very far from it to begin with. Dealing with these gaps, which the new capital produces, requires going back to basics. The state can not, and certainly should not, interfere with the rapid enrichment of tech professionals. Their money must not be touched, and it must be allowed to continue to flow to a variety of service providers. But it is not enough to just assume that the money will trickle down to the rest of the population. This population should be provided with a more direct route to this capital. Do not touch the high-tech pockets, just allow more and more pockets to be filled. Do not divide the cake differently, enlarge it. The goal is clear: to preserve the contribution of the high-tech industry so that it continues to grow while also avoiding widening the gaps. The main manner to achieve it, is to allow more people to enter the sector. For this purpose, the military technology units, the main springboard into the industry, need to be made more accessible. And for that, you need an excellent education. Excellent education not only in high schools in Tel Aviv, Ramat Hasharon, Modi'in, and Herzliya, and not only for those whose parents can afford private lessons or preparation courses for elite technological military units. Excellent education for everyone and everywhere. One that prepares students for the new job market, equips them with skills for the desired professions, education that feeds the high-tech nation. It is already starting to happen, but unsatisfactorily. The IDF has developed training programs for the periphery, but success is too partial, and everything happens too late. Instead of looking for high school students with a penchant for science - those who would have somehow made it into the realms of technology - provide the appropriate tools at a much younger age. Not by introducing programming in elementary school, but in a deeper understanding that good education demands excellent teachers who are well compensated, facilities that encourage learning, and assistance to those who need support. Not a band-aid of one program or another, rather a root canal treatment. And a perceptual change is also needed. The new wealth can help with that. Not only because it pours more money into the country, or because of the possibility some of the newly rich will understand the importance of their participation in changing the education system, through donations or volunteering. It also helps because it strengthens the “high-tech equals wealth” equation. It further weakens the assumption (prevalent mainly in certain communities) that whoever studies mathematics and physics is just a nerd, and replaces it with the assumption that one who studies mathematics and physics is looking for his path towards big money and high-tech dreams. In other words, one should use the new wealth and the discourse around it to better sell the dream. The new rich should be the role models children look up to. High-tech is one of the most prominent sectors in which the formula "learn - succeed" is valid, and does not need extraordinary talent, rare luck, or wealth from home. But for it to really work, more children need to be encouraged to dream about joining the high-tech ranks and allow all children to learn. The new wealth will allow the dream to seep into more places, now the state needs to fulfill the promise of equality, with a dream open to all.