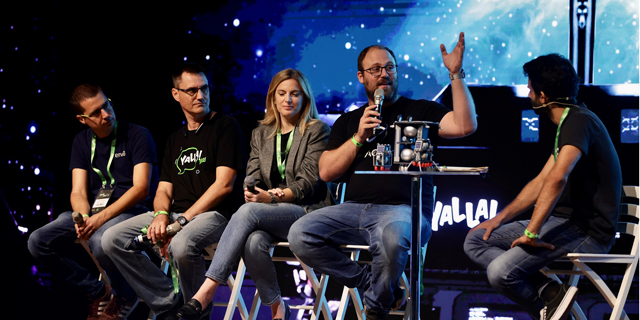 Fred Simon, JFrog's Co-Founder and Chief Data Scientist believes many of today's space challenges can be solved with software

"The Space industry has grown to an ecosystem of 500 companies worldwide and dozens of players here in Israel. Today we see things starting to connect, and it is time to invest in this area," said Omri Green, General Partner at Grove Ventures, speaking at the "Release Fast or Crash Your Satellite" panel, as part of JFrog's Yalla DevOps 2021 event. "Israel has advantages in technology needed in the space market, such as image processing and AI," added Green in the panel hosted by Eliran Rubin, Director of Strategic Business Development at TLV Partners. "The last two decades have seen us entering what is called 'new space': the term describing space industry's ability to lower costs and be more accessible to start-ups," said Dr. Adi Ninio Greenberg, science and technology consultant at the Israel Space Agency in the Ministry of Science and Technology. "Elon Musk's SpaceX reusable rockets have made launches much cheaper, while another contributor has been nanotechnology. The ability to miniaturize components and build much smaller spacecraft lowered the cost of entry to the market and opened the door to numerous new players."

According to Kfir Damari, co-founder of SpaceIL, the main challenge facing today's space companies is finding the right business model. "In the past, the complex engineering challenges of space required developing new dedicated solutions. These inventions later influenced the way things are done down here on earth, from road building to instant coffee," he said. "Today's private companies developing for the space industry are thinking in advance of ways to utilize their inventions both on earth and in space." Fred Simon, JFrog's Co-Founder and Chief Data Scientist, who is also a private doner to SpaceIL's Beresheet 2 initiative, believes we are just starting to understand the possibilities in space. "For example, a company named Made In Space is experimenting with 3D printing in conditions of reduces gravity. These terms enable the printing of live tissue, that when printed on earth, tends to collapse under its own weight. Software is eating the world, and it is also eating space," said Simon. "JFrog works with many of the big and experienced space companies and helps them update their software. A lot of today's space challenges can be solved with software, and the ability to constantly update a spacecraft and its software is very powerful."