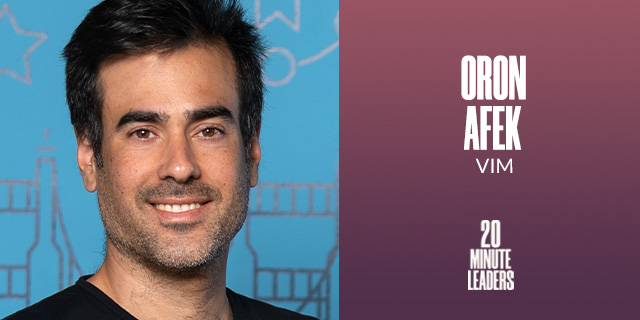 Oron Afek, co-founder and CEO of Vim, talks to Michael Matias about giving doctors more incentive to keep patients healthy and how healthier patients would bring lower costs for the physicians

Oron Afek took the entrepreneurial route after his military service, but he missed the way he felt like he had been making a difference in the world. This desire to make an impact led him to co-found VIM, which aims to change the way health care is managed in the US. VIM is an operating system for health care networks that allows more connection between doctors and insurance companies. Afek says laying this groundwork of better connectivity is an important step toward value-based care. He would love to see primary care doctors have more incentive to keep patients healthy by being paid a set fee per month. Then the doctors would be responsible for the costs of care. Healthier patients would bring lower costs for the physicians. Afek feels lucky to have found an opportunity to be part of solving a problem that will help improve many lives.

Tell me a little bit about what VIM is.

VIM is an operating system for health care networks. We operate solely in the United States, which is a story by itself how we started this thing as a bunch of Israelis. In Israel, we have two or three large HMOs, health maintenance organizations. Fully integrated: payer and medical provider are part of the same entity, full alignment of interest and everything is very streamlined.

In the US, the system was established as a fee-for-service system. Physicians here actually have the wrong incentive, in my opinion, which is to treat you when you're sick. There is a lack of incentive to keep you healthy. There's an incentive to render more care when you're getting sick. This also is driven by this separation between the payer and the provider. Basically this separation between “church” and “state” is not good in healthcare. Physicians are charging on a fee-for-service basis. The insurance companies would like to pay less. That inherent conflict of interest combined with the IT fragmentation is a huge problem.

We have millions of Americans that just don't have proper health benefits. They get sick when they don't need to get sick. When they do get sick, they can't pay the bills. A lot of people are going out and they're solving these trillion-dollar problems of misalignment in the economy. But you're actually working on improving people's lives.

It's easy to forget sometimes that we're doing something that is very special and helpful for people. Myself and the company in particular are very driven people. And we're doing it first and foremost, to make a difference, not for economical reasons. We truly believe there is a huge financial opportunity side by side with fixing the system.

We can't do everything we want. VIM had to focus on one area where we can make a difference. What we've been focusing on is actually building this connectivity tissue between insurance companies and physicians. Physicians’ electronic health records systems don't talk with each other, and they don't talk with the insurance company. So, we make them all talk and enable ease of access to data and ease of transfer of data. We believe it's going to become the operating system of the network of healthcare and thus become the groundwork for value-based care.

Value-based care is a world where incentives are aligned between insurance companies and physicians. Doctors are rendering care in order to get you healthier. They're actually enjoying the downstream cost savings of your health. Think about a physician who is incentivized to render better care and for your long-term benefit in keeping healthy. That's how she's actually making money, not from rendering more care but by rendering less care. To actually make this happen, you need connectivity, you need data to flow, you need incentives to flow. That's what VIM does.

How do you change the alignment so that a physician doesn't get the value from the service but gets a value from the patient's well-being? How does that work?

I think the rule of thumb is in one word—capitation. If you think about a doctor in whatever single payer system you can think about, they're getting a salary. That salary is adjusted in accordance with the number of patients they see.

Think about moving to a similar model where the primary care physician is making a PMPM (per member per month) fee. She is responsible for the total cost of care of that patient. She becomes a mini-insurance company. On the back end, you have infrastructure supporting stop loss and other things. But assuming she has this infrastructure behind her, she's basically able to render more care to prevent downstream cost.

Think about coronavirus. Physicians have been struggling with having office visits. They lost most of their business in the first months of coronavirus because people didn't show up. If the doctor gets paid PMPM, he’s getting paid whatever happens.

Then we have specialists. They need to think about specific conditions and procedures to render. There's a different type of capitation that may happen for specialists. I think about it as bundled payments. Instead of seeing a 300-page bill with three thousand line items that breaks down whatever happens when someone gives birth, instead you have a surgeon who would say, “I'm going to do this delivery for $30,000. Whatever happens happens. And I'm responsible for the total cost of care for that episode.”

If you cap the PCP on a per member per month basis and you cap a specialist on an episode basis, you can really form a marketplace of value-based care. I believe it's actually the answer for single payer systems that are bankrupting because of over-demand for private services. I actually think this can solve other Western world problems, if we can actually build this model.

Oron, how do you get to educate a new market in health and creating a new economy between patient, doctor, and insurance? What leads you to go and create this whole new economy and new marketplace?

Every physician in the United States is, on average, contracted with one large federal insurance, usually Medicare. Then they have another 20 or so commercial insurance companies. This is a super fragmented environment. When every insurance company is trying to do its own thing and tries to propose its own model, it's so fragmented, there is no way something meaningful can happen. The doctors are not adopting those offerings because they only apply for a small subset of their patients. What VIM does is that we aggregate those insurance companies. We're actually able to represent a bigger portion of membership and talk with physicians in a way that it appeals to them to really change behavior and alter the incentives.

What led us to start? My personal story is just frustration. Pure frustration from my own personal career. I very much enjoyed my time in the military. I felt like I was making a difference. When I started to become an entrepreneur, the two main companies I was involved in were in the telecommunications space and in the gaming space. Not to discount any of the values of those two areas, but I haven't felt fulfilled and driven doing those things. I felt like the economical impact on my personal life was pretty much gone after I could afford to pay rent and maybe some more. I felt like that's not really making any more difference for me.

I'm trying to really think about something that will make a difference. I saw that marketplaces are what I'm really passionate about. I started reading everything about marketplaces. As a frustrated builder with a hammer looking for a nail, I was looking for my marketplace to be built, and Obamacare was starting to emerge back in 2014. It's just an amazing opportunity. The cost and quality variation in US healthcare is the biggest disparity in the world. I thought it's a great opportunity. I didn't know anything about health care back then. I feel very lucky to have stumbled upon this amazing opportunity and industry and people.