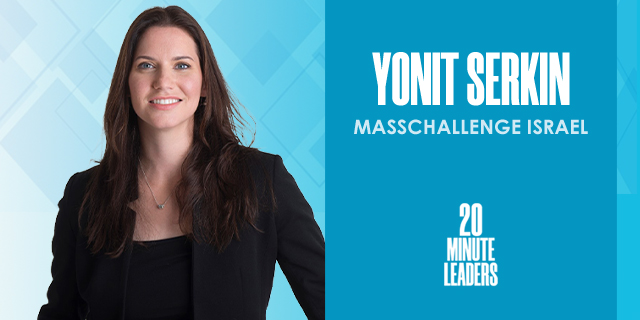 Yonit Serkin, managing director of MassChallenge Israel, talks to Michael Matias about the uniqueness of the Israeli ecosystem and why you want to work with people who push you to do better

While it may seem natural to enjoy being the smartest person in a room, Yonit Serkin is energized by being around people who are more intelligent, ambitious, and driven than she is. She shares that being in that kind of environment during her college years helped put her on the path to being managing director of MassChallenge Israel. But Serkin didn’t first encounter those smart and audacious people in the world of startups: it was when she joined Mike Bloomberg’s political campaign on a whim. That experience led to jobs in economic development, which introduced her to entrepreneurs. Now she leads an effort to help startups grow in Israel. Serkin advises founders that a certain amount of humility is helpful for the startup journey along with crazy passion. She loves the sense of community in the Israeli ecosystem, where successful people are willing to help others.

Tell me about your entrance to MassChallenge.

In university, I worked in a political campaign, Mike Bloomberg for mayor. I met incredible people. After I finished graduate school, I joined his team. Eventually I was the deputy chief of staff for economic development. That's actually the point I met tech and VCs at all. Part of my role was to get to know startups and founders and see what it is that they need to grow. I was enthused and excited by people who come together, who see intractable problems and think that they can actually solve them. That audacity is just fascinating to me. When I moved to Israel in 2010, I knew that this was the place that I wanted to be. I helped found a fund, then moved over to Moonscape, where I was doing corporate investing. So much of my work was around helping our portfolio navigate within the corporates that we were supporting. I found myself helping navigate between these two worlds of corporate and startups. I joined the MassChallenge team as we were being founded here in Israel; it felt like the natural next step, having sat in a few seats around the stakeholder table, to actually now be on the side of entrepreneurs. I've had the great fortune to lead the team now for the last three years. We work with entrepreneurs and innovators to help them grow their businesses, get to new markets, create jobs, and build strong, sustainable startups. What is the responsibility or role that you see for yourself or for MassChallenge within the Israeli ecosystem? I see our role here in Israel as being very specific around helping entrepreneurs parlay their successes here into global activity. We know that one of the things that Israel does uniquely well is identify great technologies, but then also understand that the market is elsewhere and help bridge over to that. Because MassChallenge has this pretty incredible network around the world, I think we're uniquely positioned to help entrepreneurs do that. We invite entrepreneurs from all over the world to join us. The MassChallenge Israel program is not only Israeli. About a third of the startups that we're working with come from outside of Israel. We actually get to introduce foreign entrepreneurs or foreign founders to the incredibly deep, strong local ecosystem that's very engaged in volunteerism. We see so many people in really meaningful positions who volunteer their time to work with early-stage entrepreneurs. It's something that I think, as Israelis, we sort of assume is part of the culture everywhere, but it really isn't. One of the things that is keeping this engine going really is the spirit of volunteerism and willingness to support one another. What are some of the important things to work on with these startup founders? At our first meetings, founders almost exclusively talk about fundraising. Everyone is sure if I just find that check, I'm ready to go. When you actually sit with founders, you take that apart and say, "Well, how can we actually build not just a product or a technology, but a sustainable business?" That requires advisors, it means building a team, it means building a product offering, it means understanding our customers in a really deep sense -- and those are all things that we help support them on. We need to start getting that conversation around diversity and inclusion happening today. Because that's going to ultimately help them grow into more attractive, sustainable businesses for the future. We know that in the US, there are many funds that will only work with startups that have ESG goals. That's the sort of thing that's really hard to add on afterward. But if you've got it built into the business from day one, then you're really well positioned for that sort of growth. How does MassChallenge interject itself within the startup life cycle? MassChallenge takes a community-based approach to everything that we do. At any given point, we're accelerating 40, 50 companies. We work with volunteer mentors and experts from around the world who come together on a weekly basis to work with the startups to develop those goals, those criteria, and think critically about the way their companies are ultimately going to grow and go to market. We bring 10 startups every year to the US so that we can be that supporting network to identify the folks who can help them get to that next milestone. 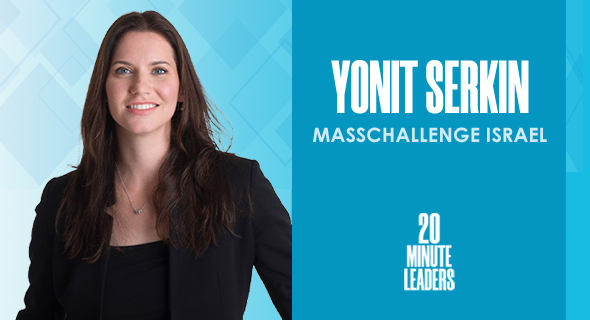 Why do you do what you do? I think that MassChallenge Israel is a unique platform for me to get to know incredible people who are building incredible companies. There is no day that I'm bored because I will meet with one company in the morning that's looking to solve challenges around accessibility to health care. Then I'll meet in the afternoon with a company that's creating cyber solutions for critical infrastructure needs and another one that's figuring out a better way for students to be educated. There are very few jobs in life that allow you to be on so many different journeys at the same time. I feel incredibly lucky to be able to do that with a team of super driven, super ambitious people who are looking to support innovation. What are some common patterns you see from early-stage entrepreneurs? I think that one of the best markers for startups is really the passion of the entrepreneur. I think being able to answer "Why me? Why now?" is critical. The founders who are able to do that in a really succinct and exacting way are in a unique position to really be able to get traction and to raise capital. I think the other place that we see some founders really shine has to do with humility. The entrepreneurs who are confident that they know everything have a really long learning curve. Founders who understand that there's a universe of things that they may not know that they don't know: those tend to be the ones who learn more quickly. I absolutely think that founders need to be irrationally passionate and driven about their companies. If they were rationally driven about them, they wouldn't be doing it. But in addition to the irrational passion, having a sense of humility and ability to learn and desire to learn is irreplaceable. Do you see any shift in the entrepreneurs over the last couple years? There's absolutely changes going on. The first has to do with age and maturity. I think we are seeing founders who have gotten several years of work experience beforehand, as opposed to perhaps, directly out of the army or university. Number two is a real profound understanding that they're looking to build companies, not just startups that are going to look for an exit or an acquisition. That's not to say that all startups are going there, but I think in the last five years, we've seen so many more Israeli companies that have reached a growth level on that scale. What fascinated you as a kid? I had plans to be an Olympic figure skater. I spent 10 years figure skating, competing as a figure skater. A role model, some inspiration along your journey? I had this incredible opportunity very early on in my career to work with people who were so much smarter, so much more driven. That's been a sort of role model that you want to work with people who drive you, who push you to do better. Three words that you'd use to describe yourself? I’m all about balance and creating networks and bridges.