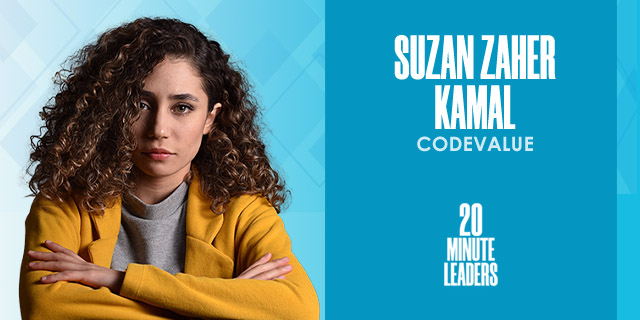 “How can we can bring more Druze people to the high-tech industry? It's all about awareness."

Suzan Zaher Kamal, software developer and team lead at CodeValue, speaks to Michael Matias about her work and its impact on communities across the country

Not every engineer or coder has been on that technology path their entire life, as Suzan Zaher Kamal demonstrates. She grew up with very little exposure to code, software, or computer science as a member of the Druze community, but she is now a software developer and team lead at CodeValue. Kamal shares that bringing your uniqueness to work is valuable. It helps you see and create different things than your co-workers. As a minority within a minority in the tech industry, Kamal enjoys being a role model for other Druze people and women. She says young people need role models and need to see people like them in the tech industry to be able to picture themselves there. To further integrate the Druze community into Israel’s high-tech ecosystem, Kamal suggests that other communities get to know the Druze better and that there be more investment in Druze education.

You're a team leader at CodeValue, an engineer and a big influence in the Druze community. Take me a little bit throughout your journey.

After graduating from school, I found that industrial engineering is very interesting as a profession, where it's all about a process of optimization in companies and complex systems. It's all about solving big problems and offering smart solutions. I started studying at the Technion. My first semester included an introduction to computer science. I immediately fell in love and I found a really deep interest in how a computer works. I felt a natural connection to the way computers think or operate. It was so rational. I decided to go that way and major in information systems. In my last semester, I started a bootcamp in CodeValue for almost six months. Eventually, I was ready to work as a software engineer.

Many engineers grow up with a computer in their hands and they're surrounded by people that are engineers. Was that the case for you?

No. Actually, I had no connection to it. When I just started studying, I was open-minded and I saw a lot of domains that I could go and really influence. I see my profession, being a programmer or being a software engineer, as a tool for me to influence and do things in today's world. It's more like a way of life rather than just being a profession or a job.

Tell me what surprised you along this path.

I think maybe 1.4% of the total population of Israel are Druze. The Druze are really Arabic speaking. Druze is actually a religion. But (part of) what makes us unique is that we serve in the IDF. The feeling of belonging is what makes us different. We really feel we belong to this place. It's not just we're fighting the country; we're fighting for it. We want to be part of this place.

How we can bring more Druze people to the high-tech industry? It's all about awareness. It's all about knowing this population and community, learning about it more, visiting their people and maybe start investing more in the education system. That said, I think one of the things that I do is that people can look at me and say, “There's a lot of women and people and Druze that can really be in the high-tech industry.”

The Druze community, how much is it integrated into the Israeli tech ecosystem today?

I think there's a lot of Druze people in the tech industry. Maybe not enough. Again, because of the separate education system. When I was in high school, I didn't learn computer science. Our parents worked in different domains, so we're not really exposed to it.

Tell me about your personal experience of being a minority within a minority.

(Druze) ask me, "What do you do in your daily job? You're sitting all day in front of a computer, you do nothing.” I have to explain to them what I do. I have to use some real applications and I say, "I do this. I connect all the dots together and solve problems." It's hard to explain.

There's an aspect of investing a lot of time in it. Because when you are an engineer, you have to make it your life. Sometimes you find less time to invest in friends and family. You really don't have time. But on the other side, I love it. I feel it empowers me. I grow from it because I have the support.

Tell me about the job of a team leader.

Transitioning from being an engineer, hands-on, to overseeing a team of engineers, how does that balance?

It's hard because you still need to program or do the engineer stuff in order to keep being professional. I invest in both aspects. Maybe it's half being a team lead, and the other half, I'm being a programmer or engineer. I can say it's not an easy thing to do, but you just need to handle it.

What are some tangible things that young people can do to follow your path?

You need to see a role model. You need to see people in this industry before you can do it. You need to think big. You need to, again, to be open-minded. I think you have to invest in every aspect to bring the Druze community inside the Israeli ecosystem. You need more people like me so people can see us and learn from us.

We didn't even begin to talk about what you do with geographic information systems and image analysis at CodeValue. I think we'll save that for another episode. What were some things that you were passionate about as a kid?

I think it's more about a change and process. I saw my parents living their lives and trying to handle some difficulties. I see how they operate in their daily life and how they care about us, and at the same time, they go to their jobs and work and come home. It's more about the change of things that they do over time and how they achieve things and how they overcome challenges.

Somebody or something that gave you some inspiration along the way?

At first, I wanted to go to work to be successful, to do something important. But today I think about it differently because I see people around me, smart people, that see things differently. I really think that I can do everything. This is the inspiration, I think, for me.

Curiosity. I find difficulties more as challenges. Being interested in human behavior. I'm an enthusiast who sees technology as a tool to bring change.