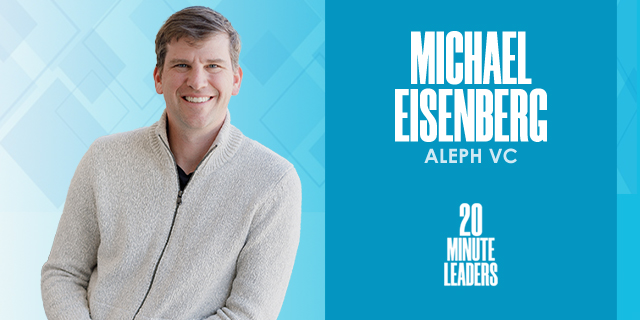 “I read a fair amount, but I learn more by meeting and speaking with interesting people.”

Michael Matias is joined by Michael Eisenberg, equal partner at Aleph VC, who talks about the meaning of balance in our lives and how to fulfil a moral duty to help the people of Israel.

Values are crucial to Michael Eisenberg in every aspect of his life. He says that values and morals are what drive the human soul. He lives this out by beginning his day with time in the synagogue and reading the Torah. In fact, he moved to Israel to create jobs as a spiritual calling. Eisenberg invested in an early internet company that facilitated photo sharing because of the value it could bring to his family. Later on, he helped found Aleph VC based on family values so everyone who works there will feel supported professionally and personally and so that they could help the entire Israeli ecosystem, not just companies in their portfolio. Eisenberg advises those early in their career to focus on building a network of people you can help and who can help you. That support is more important than your personal knowledge, he shares. Michael’s book, The Tree of Life and Prosperity: 21st Century Business Principles from the Book of Genesis, is forthcoming and available for pre-order online on Amazon, Book Depository and other sites. The book explores the eternal principles for successful business, economics, and negotiation hidden in the Book of Genesis—and shows their relevance to the modern world we live in.

You’re a father of eight. How do you get everything done?

I don't believe in the notion of “work-life balance” because hardly anything is ever perfectly in “balance,” whether in our personal life, or in the physical world. As such, I think it's a false promise made to people. So I say to my kids all the time, there can only be one thing at the top of your priority list at any given time. The most important secret is that I married really well. My wife's amazing, and that's how I get a lot done.

How do you decide the priority?

I get up early in the morning. I go to synagogue first thing. Then I sit down and have Torah study time, because I've been writing books on timeless wisdom in the Hebrew Bible. Then I go to work in Tel Aviv. I read a fair amount, but I learn more by meeting and speaking with interesting people. The more meetings, the better.

With eight kids, with all these investments, you still find time for the things that you're passionate about.

Why am I doing what I'm doing? I was at a press conference with a rabbi many years ago. I asked him about moving to Israel versus staying in the United States and moving to a rural area or a big city. He said, "That's nonsense. You need to move to Israel and build a factory that will employ 10,000 people to earn an honest and decent living."

I thought, "Whoa! There’s a spiritual underpinning to economic development and wealth creation. There is dignity to work. People need to earn an honest, decent, and meaningful living. At that moment, I decided to move to Israel and create 10,000 jobs. That's become my life goal. If we get to 10,000, we'll then aim for 100,000 so even more people can earn an honest and decent living. That is a spiritual calling in my view.

Going back to 1995. Is where we are right now your vision for the internet?

I don't think we knew in '95 what this “internet” was going to become. The first investment I made in the internet was at a company called PictureVision for photo sharing. I had moved to Israel. My family was living in America. “But how are you going to share pictures?”, we were constantly asked. I said, "Well, if I need this, more people need this." The early internet conferences were amazing. There was one called the Internet Summit. There were a couple hundred people. You knew everybody because it was a small club. Now it's everything. It's the world.

How did you get talking about the internet?

When I got to Israel, I was unemployed. I started something that became like a merchant bank for tech. Then we backed PictureVision. Everyone looked at this company in the early days and said, "What's an ‘internet’?" I had an advantage. When I was in college, I used something called Aldus PageMaker to publish our college newspaper for free because we had no money. So I was familiar with this thing even though it wasn’t yet known as the internet.

As you go through the years, what's changed?

A lot. One, in the 21st-century, values are generating value. True, we may not agree on what those values should be. But brands are increasingly rooted in values. Therefore, I believe my attachment to Judaism is an advantage in my work. I can articulate that as an economic value as well as an economic-policy decision.

You're talking about an intrinsic value and a theoretical idea of optimism, right?

It's not theoretical at all. Many economists like Daniel Kahneman have proven it. Economists are theoreticians—they don't necessarily have skin in the game; investors do. I'm judged by my outcomes. If I'm wrong, I'm out of business. I need to bet on that innovation.

A second thing that's changed is that the most important thing in your career is your network, not your knowledge. Being a mensch, treating people right, and building a network of "I'll help you and you’ll help me" is the most valuable thing you can do early in your career.

What does being a mensch in the tech industry mean for you?

The tech industry is super competitive. But here’s one of the things that most inspires me. We had a company here in Israel that was hacked by the Free Syrian Army. We had a competitor in Israel that sent their people to help us defend ourselves against hackers. That’s amazing. That's a values-based system with strong roots. Just turning up for people and building relationships is part of being a mensch.

A third thing that's changed for me—and this is a privilege at this point—is that I’ve decided I only want to work with people who also respect time-honored principles. We could be looking at the best idea in the world. But if we're not going to enjoy having a dialogue as partners or collaborators, I'm just not interested.

What have you learned through the entrepreneurs that you've worked with?

"Why" matters. You can motivate people to do remarkable things if you simply explain to them why their effort would be so worthwhile. In today's environment, engineers are a scarce resource. They want to know that their hard work will be solving unique and pressing problems.

There's something in the energy here that's different. What is Aleph?

When we started Aleph, we wanted to create a family, not just a venture firm. Families have certain values. One is that you stand up for people, no matter whether they land. We have a number of Aleph employees who have gone on to our portfolio companies, and we've supported them.

Number two, you turn up for people personally, not just professionally. And three, we decided that we were going to invest in the broader ecosystem. We make a lot of our stuff available to people outside of our portfolio. Our team rightfully believes it’s on a mission to make Israel—and, specifically, the Israeli tech ecosystem—powerful and successful.

Why are we doing this? We do this to make profit for our LPs. That's our fiduciary duty. But we also have a moral duty to help the people of Israel and others around the world. And that's a duty with which we’re honored to be charged.”

I have three fun questions. Favorite subject in middle or high school?

Somebody who inspires you?

My wife. That's easy: my wife. Though I’d also add my parents and my grandfather.

Grateful—to the people who have helped me. Ambitious—there's a lot more to do in this world. I'd like to make it a place filled with much more opportunity. Everyone deserves a shot. And optimistic—I'm always optimistic.