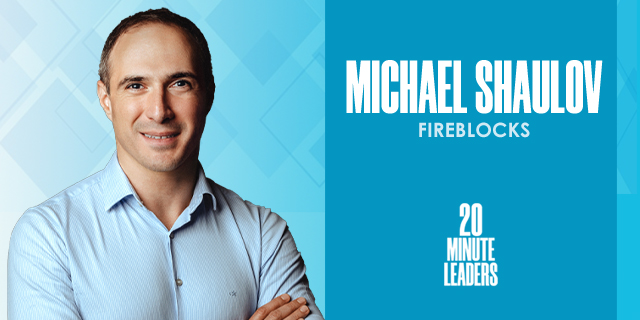 “Relying on feedback that is local feedback is actually pretty worthless. You really need to cross the oceans”

Michael Shaulov, CEO of Fireblocks, joins Michael Matias to discuss feedback - both from friends and the world - when considering a new startup idea

Knowing how to ask people the right questions so they will tell you hard truths is key to launching a successful startup, shares Michael Shaulov, CEO of Fireblocks. He says many people will tell you your idea is good because they are uncomfortable telling the truth, but entrepreneurs need to know how to get the answers they really need. This will allow changes to be made in the very early stages of a company. Shaulov also shares that global feedback is important in the beginning of a company. He thinks Israeli founders need to plan on going to bigger markets and should seek U.S. and European feedback from the start. His previous company, Lacoon, had to do a product pivot once they heard privacy concerns from other areas of the globe. He says it was a painful process, but it turned out to be a powerful one for Lacoon. Click Here For More 20MinuteLeaders

Your career is just fascinating. You were the CEO and co-founder of Lacoon Mobile Security. Previously at 8200, at NICE systems. Sold the company to Check Point and headed the products of mobile and cloud security. You’re also a seed investor in ARMIS and Orca. And today, you’re the CEO of Fireblocks. What got you most excited throughout your career?

I think it's to build stuff. Several years ago, someone asked me, "Why do you keep doing this?" I had to think of why I'm continuing to engage in something that is so hard and demanding. I just realized that basically what I enjoy the most is building things.

The fact that you can basically start with basically zero resources or a very limited amount of resources, you can go and build things that will be used by a vast amount of people or communities—that's just fascinating. Just to build something that works is fascinating. I think the commercial and economic aspect of it is also interesting. Entrepreneurship and creating a startup is definitely the most difficult way to create wealth. But I think that this is the most impactful and most interesting one.

We briefly talked about the struggles of those getting-started days. What were some of those struggles like in your personal career?

When we were in 10th grade or so, I already knew how to program in PHP and some basic websites. It was '98 or '99. A friend came back from Germany, and he told us that the argilas or hookahs are extremely popular in Germany but they cost tenfold of what they cost in Israel. So we basically built this website, which was called "go to the argila." It was an e-commerce site. We would get orders, and we would ship those products to Europe or the United States. We made an amazing amount of mistakes. In fact, there is a reason why this website doesn’t exist today. But also, it's interesting to see how a group of teenagers were able to identify a market opportunity.

What I learned through this process is actually that the early days of a startup are so difficult. In order for someone to basically figure out at day one a market that is untapped that you can really build a product that has clear demand, and you can pitch that to investors and they will be willing to fund you, and then find the talent that will join you on that journey is a very difficult task. Even if you figure out the first aspect, it's not always trivial to figure out the second or the third. It requires this multidisciplinary approach. I think it's experience that basically comes through the years of both being a really good engineer, understanding how to tell the story, but also being very realistic in terms of how you read people, how you ask them tough questions so they will actually tell you the truth.

My personal experience was more failures than successes. Even before Lacoon, I tried a few startups, and most of them just failed. Before Lacoon, we had a different startup, BlueRidge. We actually raised a bit of money for it. It was very clear from the beginning that something about that idea didn't click. We would go to IT professionals and pitch them the idea, they'd say, "Our direction is completely different. Although I like the idea.” I had this conversation with a friend, and he told me, "You need to read this book called The Four Steps to the Epiphany." That was really the book that opened my eyes. There is a very clear path in it around how you do customer and market validation and essentially the process of really asking those questions and understanding the answers that you're getting. Because, inherently, people always try to tell you that "this is a good idea" because they feel uncomfortable telling you that it's crap. Most people will fail this sort of uncomfortable situation. I was just telling someone that is working really hard that his idea is, in their eyes, worthless. By the way, Israelis are pretty good at saying that. When you go to other cultures, especially in the United States, people are definitely trying to be very politically correct and protective.

I believe this idea makes an appearance in Malcolm Gladwell's Outliers, where he discusses the Israeli Air Force and the culture differences.

Eventually, I think most Israeli entrepreneurs and also European entrepreneurs, they need to seek a big market, especially in cyber security. The US right now is the biggest market from a single country. Relying on feedback that is local feedback is actually pretty worthless. You really need to cross the oceans.

In Lacoon, we really took it to heart in terms of following those guidelines. I don't think we executed perfectly because some of the mistakes that we did in the early stages were relying on feedback of Israeli CSOs, which was not aligned with the feedback that we eventually got in the US and then European markets, where there were much stronger privacy concerns. Somewhere around nine months in, when we actually started to get that feedback in a clear voice from the US and European markets, we had to pivot. Pivoting is a pretty painful process, but as long as you're able to do it early on and especially if it's based on true feedback, I think it's quite powerful. I think this is what basically saved us in Lacoon. I've seen it over and over again that you actually have inconsistency in terms of how a solution, product, or value proposition is being perceived across different cultures and markets.

Were you open to those messages? How did you react to this new information?

It's very tough. I think that it's also much tougher when you're an engineer. Because when you come from an engineering background, first of all, you're in love with what was already built and you're loving the lines of code that were already written. You think, "Well, we can build it. It will work." There is a tendency to basically discard feedback. In retrospect, I know that feedback was there from day one, but I think we decided to just not react to that. We basically were forced to react to that when we understood that there was no other option. Later, I understood that we needed to change how the product is basically being implemented. It wasn't actually a pivot. Usually, pivots are basically business pivots. That was actually sort of a product pivot, which is less common. But we changed the architecture that removed a lot of the issues around privacy, and then we pitched it to JP Morgan again, and they were like, "That actually makes sense." Then we knew that we hit something that is meaningful.

I have some final questions for fun. Your favorite subject in school?

The first subject that was my favorite one was physics. But actually, my second most favorite subject was cinematography.

One of your role models throughout your life?

They keep changing continuously. I think that one right now is Bill Gates. I think that after watching the most recent documentary from Netflix, there was something very inspiring both in terms of what he's doing right now and honestly also in terms of how he changed through his career.

Three words that you would choose to describe yourself?

Fearless. Thoughtful about things. But also there are aspects of me that are very impulsive.