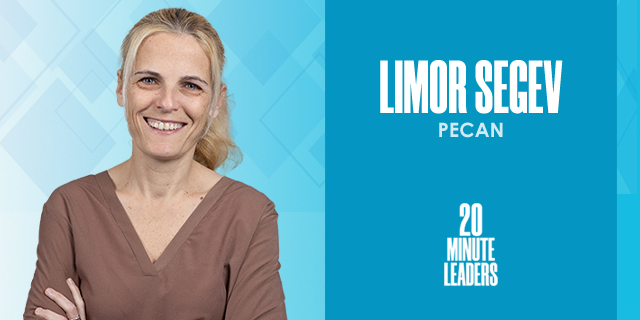 "Everybody knows that the dynamic between VP product and the CEO is something that you need to address. It can be complex.”

Limor Segev, VP product at Pecan, speaks to Michael Matias about finding the right values for the company through honesty and trust.

A company’s values are often set by a small group of executives and just live on a poster, but Limor Segev shares that the process and results at Pecan were different. Employees all participated in focus groups to talk about the company culture, who they were, and who they wanted to be. Segev, who is VP product, says the process itself was amazing and worthwhile. The results were also very positive. Defining the values together gives everyone a common language for conversations when the values aren’t being followed. It also helps identify good fits in the recruitment process and helps in onboarding new team members. All employees at Pecan also got to participate in another exercise to dream about the company’s future. Each wrote an email as if they were a happy customer two years from now. This allowed them to see if their dreams were similar, Segev explains.

You are VP product at Pecan. Is it Pecan (pee-kan) or Pecan (pick-ahn)?

I like Pecan (pee-kan). I think that's the right way to go.

Pecan (pee-kan) it is. Limor, give me the breakdown of how you ended up vice president of product of this amazing company.

Before Pecan, I had a lot of product roles at eBay and then at WeWork. And then the "WeWork thing" happened. It was a crisis for me. I had a very large group of people there, and then we had to let everybody go. It was also following these two years of super, super intense work, and I announced that I'm not going to do anything that is even remotely related to startups. I need to relax.

You were VP product billing and payments until March of 2020 in WeWork, and you started VP product at Pecan about a month later.

How did that happen? Everybody was trying to convince me that I'm wrong. I was meeting a few people just to be polite. I went to meet Zorah; I didn't feel like it. Then two things happened in the meeting that changed everything. One, the dynamic with Zorah personally was amazing. It was inspiring to see this combination of a CEO who is both visionary but super humble. Everybody knows that the dynamic between VP product and the CEO is something that you need to address. It can be complex. I knew that we could make it work very, very well.

The second thing is that while he was describing what Pecan is doing, I could feel the pain. I was sitting on a lot of data, not being able to realize value out of it. I could actually see and understand the pain of having data, having a lot of people that know intuitively what to do with the data, but not having the data scientists that can help you realize and get value out of it. I work with a lot of data scientists, great people, but sometimes even if you have a data scientist, the dynamic and the pace is different between what the stakeholders and the business need and what sometimes are the cycles in data science world. So I could actually see myself enjoying Pecan.

Tell me about the values of Pecan and how you and the management team thought through honing in on them.

We needed a group of super passionate people because we are solving hard problems. We are actually solving things that require a lot of passion and a lot of effort and a lot of smart people to do this crazy journey with us. We didn't want to have this poster of values that nobody cares about, but we did know that there was something unique here that as we grow, we need to maintain. As we grow, we need to make sure that we are being true to what we want to be.

Instead of forming values and then presenting them, we actually we built our story, our culture together. We had focus groups. Everybody joined. Everybody had to imagine how we want to be, how we are today, where are the gaps, how do we want people who are joining to act and to think. I love what we came up with. I think it's a really true representative of what we are: ego aware, value devoted, and creative builders. But even putting the outcome aside for a second, the process was amazing. The process of asking each and every employee: Who we are? Who do we want to be? And who do we want the people who are joining us to be?

How do you feel that this process changed the way that the employees are interacting with these values on a regular basis?

I think in three ways. One is it gives everybody tools to keep everybody honest. If somebody is really, really stuck in a specific idea or not willing to let it go and you can see that he's already in this point where being right is what he's trying to get, you can say, "You know what? I think this is not totally ego-aware. Maybe you should reflect for a second." It's an easier way to do the conversation or it gives the employee a tool to challenge us. You cannot dismiss it if you just actually agreed with them that this is the value.

The second one is classic but still super critical. This is how we evaluate people who are joining. There's great people, super talented, that might know how to do the job and might be a great fit for other companies, but if we feel that they will not be able to live based on those values, then we won't be able to recruit them. I'm super proud of the team keeping that.

The third one is this is a great way for someone joining. They go through the value training, and they talk to people, but they also get a chance to contribute to them. They also get a chance to say, "Are we actually living according to those values?" There's times we take cases when we feel that we didn't live by our values and evaluate them.

Tell me also about your stance on product development in general and the ability to provide ownership and responsibility across all employees across the entire value chain.

If you look at why I joined Pecan, I joined somebody else's dream. It was so amazing that it made me join. When I joined, I needed a way to get connected to it but to also contribute to it. It's about providing that to each and every member of the team. Let's take a depressing example. Let's say there's a war and you want to get everybody to jump with you. It will be much easier if they know why they're jumping, or even more so if they actually were the ones who defined why. So, in another way the product process, you sit in a room, you talk to a lot of people separately, come up with this presentation, and present it, and everybody claps. That's one way to do the process.

Another way is to create a shared narrative, a shared Pecan narrative of what we want. When I joined, I needed to hear Zorah and Noam’s story of two years into the future. If you receive this excited email from a customer, what does it say? Each of their letters was slightly different, so we were able to talk about that. We asked every employee to write that email of what a satisfied customer two years from now would say. What do they gain? What is the value that they are getting out of it? It's a fun exercise to do. It enables us to share the story in a very fun nonjudgmental way. You cannot judge what I'm dreaming about, but we can compare it and see if we are dreaming the same thing.

I love math. I was really, really obsessed with it.

In my personal life, my kids are inspiring me every day with their new ideas and new thoughts. It's like you are able to be excited about snow or stuff like that just through their eyes. Professionally, I'm super excited about this movement of product-led growth.

Thoughtful, passionate, and always willing to be wrong.