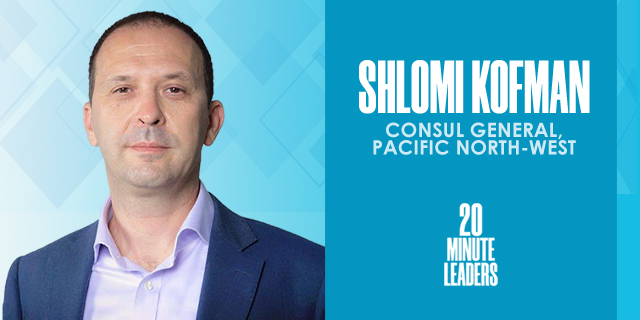 “Every nation has its advantages and it has its disadvantages. And we have both too.”

Being a Consul General of Israel means telling the story of Israel, shares Shlomi Kofman, who is Consul General to the U.S.’s Pacific Northwest. He functions like an Ambassador covering five states and Northern California. Kofman meets with government officials, business leaders, academics, and the Jewish community to help build bridges between Israel and this region of the U.S. He explains that the deep ties between Silicon Valley and Israel are significant for the entire world, not just the two countries. There are around 50,000 Israelis in the Bay Area, and their large presence in tech is a crucial component of the country’s representation, Kofman says. He believes that following Abraham Accords , Israel becomes more integrated in its region and the world and that progress will continue. Click Here For More 20MinuteLeaders Shlomi, first tell me what it means to be a consul general.

Being a Consul General means telling the Israel story, to be there to represent the State of Israel, and to build bridges to the State of Israel. It’s 24/7 work that comes with a huge mission and huge belief in what we stand for, and Israel's values , what Israel represents and the story of the People of Israel. For me, it's a mission, which never ends. The job is never done because there's always so much to do. It's to be an ambassador for Israel, just to open doors for people here to tell the story. It's my greatest passion.

Give me some examples of how telling the story actually takes place across this area.

How does a day look? It's meetings and building connections with elected officials in the academic world, with the Jewish community, and of course, with the tech community and businesses. We cover Montana, Idaho, Alaska, Oregon, Washington, and Northern California. In the past year, we've been doing webinars between companies in Montana and Israeli companies, between Washington State and Israeli companies. Other days, I have meetings with members of Congress , briefings to different groups in Jewish community and more. It is very diverse type of work .

What does this role mean to you? Having seen a lot and experienced a lot, was this a goal to be the Consul General of the area that you're in?

When you embark on the diplomatic work journey, it's not just a career , it’s a life journey . You understand that you will be exploring and experiencing the world, move yourself and your family from place to place. In different places, From one country to another the characteristics and the work varies, but the mission stays the same. As a diplomat, the goal is to become a head of mission, whether Ambassador or Consul General and have the ability to connect to Israel the way you see it. A Consul General is an Ambassador in a certain area. When you're ready to become a head of mission, you can choose whether you want to be an Ambassador to a country like Vietnam or you want to be a Consul General in San Francisco or Miami. You present your candidacy and hope that the committee will choose your first priority based on your experience and the added value you bring. For me, San Francisco was the first priority, and I was lucky enough to get it.

Tell me about your current work and some of the things that you've learned.

I landed here after working seven years in two other missions in the United States, New York and Washington, and previously I served two terms in Thailand and China . After so many years of working in these different areas, I came here with a deeper understanding of how the area looks and what are the important things. For Israel, this area is crucial, and Israel is very important for this area as well. This area connected to Israel in tech, the academic work, in the Jewish community, and philanthropic work. The deep ties between Silicon Valley in California and Israel are incredible. It’s a love story. It's the story of moving forward and making the world a better place. It's not just for the good of Israel or Silicon Valley, but for the global good.

How does that love story impact the demographics or the relationship we're seeing?

We're talking about around 40,000 to 50,000 Israelis that live in the Bay Area. Most of them are in tech. In Seattle, in the Bellevue area, you have around 10,000 Israelis. Most of them are in tech. So, the connection and the impact that they're making is incredible not only within the companies, but also within their own communities. When you meet people in Silicon Valley and you say, "Israel," everybody says, "Yes, I know. I know this guy, I know that guy.” That is our representation here. That's so important.

For example, people used to say, "Oh, Berkely is a hotbed of BDS and anti-Israeli activity." But actually, there's so much pro-Israel activity happening there. You see this impact around us, which is very significant and very supportive.

In your job as Consul General, you have this unique intersection of technology and you're living in an area where the notion of Israel is perhaps less political and is more financial and business oriented, right?

Absolutely. It is financial. It is business oriented. It is tech oriented. If you have to talk politics, this political connection is also very strong. You have a very strong congressional delegation here that is supportive of Israel. Speaker Pelosi, who is representing San Francisco, has been a dear friend of Israel for decades.

Philanthropies are making the connection even stronger through different circles.

I think different areas in the United States have different characteristics, and the supportive elements vary between Los Angeles, Florida, or Atlanta. We're talking about different regional characteristics but still lots of support for Israel.

What are some perhaps non-trivial or hidden responsibilities that we should be taking into account as we are going abroad and we're doing a lot of this work that does impact Israel in some capacity?

Israelis are a very special people. I think we come with a lot of innovative experience -- sometimes cutting corners, making things faster. Not always it works everywhere. But I think the beauty of Israelis is in their genuine nature and the creativity they bring to the table. From top leaders in the tech world to members of Congress and to common people, there is so much appreciation for Israel and its people, so much appreciation for what Israel has achieved. Every nation has its advantages and it has its disadvantages, and we too have both.

What trend are you forecasting? If we look five, 10 years down the line, perhaps in your area or other areas, what are we seeing for Israel as a part of the big world?

I think there is a growing integration process for Israel in the world, but it starts in our region. And the Abraham accords that we saw, the new bridges, and this new relationship with Gulf States is definitely an important trend. I'm sure this trend will continue with the new government--a trend that will support and help Israel to integrate better. It will support the stabilizing forces in the Middle East. These connections, business connection, tourism with these countries will just expand, stabilize and help to integrate better in the region.

With the Abraham accords , new opportunities and developments which we see , shorter routes to Asia, direct flights to Latin America, which we did not have for decades will help with our integration  Israel, Israeli companies, and Israeli innovation became a brand name that make difference bottom up. It's the people who are bringing that. That's the beauty of it.

What fascinated you as a kid?

What always fascinated me was the global world. Coming from a Zionist family that made aliyah to Israel when I was nine, exploring the world and representing Israel was something that I was very, very much keen on. I succeeded in making my dream come true.

I think what inspires me is what Israel stands for and that I know what it stands for. It encourages me to go and tell the story. Sometimes, it’s telling a story against all odds. Sometimes, it’s fighting a narrative that is being thrown out there. But the reality, the truth and the values of Israel, they inspire me and they give me the power to continue.

Three words that you would use to describe yourself?