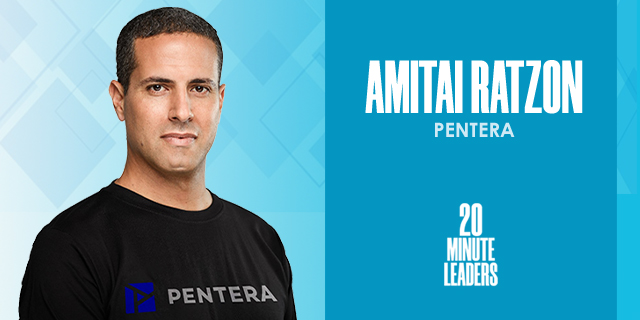 “I think what I take with me from my days as a sales guy is it's all about determination, all about hunger.”

Amitai Ratzon, CEO of Pentera, talks to Michael Matias about his journey from sales to cybersecurity

It may be hard to see what selling ads in the Jewish Yellow Pages has in common with being CEO of cybersecurity company Pentera, but Amitai Ratzon has done them both, along with a number of interesting positions in between. He explains what he takes with him from those early sales days is hunger and determination. Ratzon thrives in situations where he has to beat the odds, whether it is becoming a top salesman or growing a startup. His success scaling businesses was a great match for the technical solution Pentera’s co-founder had to move beyond static vulnerability testing. The company launches automated cyberattacks to attempt to exploit vulnerabilities so they can be closed, which is a real need as ransomware attacks have become an issue for small to medium businesses. Ratzon shares that his family is an important source of energy as the position of CEO can be difficult.

Amitai, you did not have the traditional path of a CEO of a cybersecurity company. Captain of an infantry unit, IDC, Tel-Aviv University, executive MBA at Kellogg, then doing sales and climbing the ladder to leading sales. How does that happen?

Just after my army service, I found myself in New York City and a friend convinced me to take a sales job at a company called the Jewish Yellow Pages, believe it or not. I find myself with no preparation running in the streets of New York, trying to convince medical professionals to buy advertisements. That was pre-internet, 1999. To survive in New York and to be able to go to the New York Knicks games and to have fun, I had to make some good money and do something that I'm happy with. So I kind of learned how to survive. That drove me as a sales guy. I was topping sales in this company for half a year. Then I said, “Now I can go to Israel and study law and business as I planned.” Then I was promoted to be head of an office at 23. That's where I realized that sales should be part of what I do when I grow up.

I came back to Israel. I studied law and business. I was admitted to one of the best firms in the country, Gornitzky & Company. But as I was about to do my internship, something didn't feel right for me to be a lawyer. I remembered those great days in New York where I really enjoyed selling and managing sales guys. That didn't really connect to being an intern or a lawyer. I was lucky enough to be identified by SuperDerivatives. I started there as a sales guy for the Nordic region after I finished my degree. It took me a year and a half to be the company's top performer. I learned everything on the fly.

Give me a few tips in sales.

To me, professional sales was always the professional understanding of the human's brain. To me, it was always like a mind challenge, a game challenge. When I came across a prospect, I always told myself, "This guy doesn't know, but in 20, 30 days, this guy's going to spend a hundred thousand dollars with me." What do you do in time zero so that in 30, 60, 90 days, you're able to convince and convey the value proposition? It's really a brain game of how you convince a complete stranger to follow your paradigm. Whether it's cybersecurity, FinTech, Yellow Pages, these are nuances. At the end of the day, it starts and ends with this kind of mind game.

What led you to think of penetration testing and simulating cyber-attacks?

I will take a step back before that. After SuperDerivatives, I was VP of sales for two Israeli startups. Then I got a call from the two founders of Pentera, then Pcysys. They found me on the Kellogg Recanati network. I said, "Wow. This is awesome." A technology that with a click of a button launches cyber-attacks against a company's infrastructure without installing agents, without any game, just the real deal.

I've never seen such determination in a founder's eyes like I saw in Arik Liberzon. I said, "This is the guy I want to work with." I've never written even one line of code in my life, but I scaled businesses from nothing to tens of millions of dollars. That's what I do for a living. And Arik is an amazing entrepreneur and an amazing technologist. Now, we're 130 employees at Pentera, selling tens of millions of dollars. Arik came with this narrative from his IDF unit. I joined him to make this great idea a real business that is today a market leader.

What are you drawing from your previous experiences that's helping you channel this understanding into cyberspace?

While that is something that you can learn, how to pitch or promote the cyber product, what you cannot teach is passion and drive and hunger. I think what I take with me from my days as a sales guy is it's all about determination, all about hunger. When I heard that it's an against-all-odds situation, I loved it. I think that's a very common thing across all the places where I worked.

We have a product here that adds tons of value that you don't need to hard sell. Today in the ransomware age, people don't need to be hard sold to understand that one needs to attack themselves like the bad guys to really understand how the bad guys think and operate. The founder had a solution that the market was already hungry for. When I joined, it was easier because the product already answered the real need. We didn't invent a need and then ask people to believe that the need exists.

Give me a broad overview on penetration testing today and how you're working with Pentera to test by simulations that businesses really are secure.

I think that what's interesting here is that we're disrupting an old market of vulnerability assessment. We said, "Scanning and identifying static vulnerabilities is just the beginning." What people really care about is whether those vulnerabilities that we find are actually exploitable. If it's exploitable, prove it to me. Pentera actually exploits vulnerabilities. We get to crown jewels and we show the buyer, "Hey, this is the CFO’s laptop. This is your financial report. This is the Swift user and password. Now, what do you want to do?" It's very much in your face, but in a good way. People appreciate it.

Executives at a big company, do they feel comfortable with this idea? Do they understand what you're doing?

Up until two, three years ago, the likelihood of a small, medium enterprise absorbing a ransomware attack wasn't really there. It was the business of Goldman Sachs and Capital One and Equifax, and those very big companies from America. Lately, we're seeing boards of directors and CEOs asking their CSOs, "What are we doing for ransomware?" Now that Joe Biden just went publicly and said to enterprises of the world, "Do third-party pen tests," that has given us a huge back wind. When Joe Biden does your pre-sales, you don't need the pre-sales team, right?

I was always inspired by greatness in sports. I grew up playing basketball in the streets of Jerusalem. In my teenage years, Michael Jordan was my idol. He was asked, “Why do you give your heart and soul every game?” Michael Jordan said, "Because in any stadium where I play, there is a kid somewhere that has never seen me playing. For this kid, I'm scoring 35 points." I try to apply it in the way we play this game here at Pentera. Whenever we go, they haven't seen us in action yet.

I think you also answered what inspires you today. What are three words you would use to describe yourself?

A family man. To me, it's all about my three kids and my wife. They're giving me the energy and the happiness to continue. Because as CEOs, it's quite lonely sometimes, and you need energy from a different source.