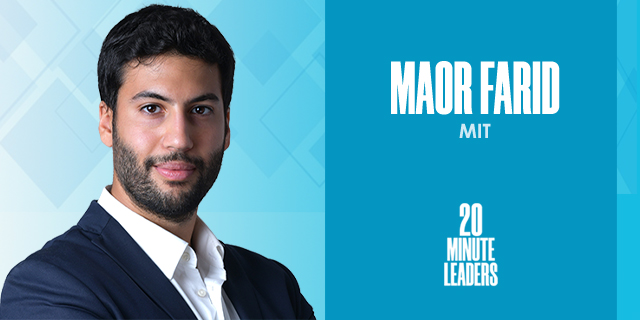 "When you have a dream, the next thing that you're going to have is hope."

Michael Matias spoke to Maor Farid, postdoctoral Fulbright and ISEF Fellow at MIT, about helping children to study and succeed.

Maor Farid had the odds stacked against him growing up in a difficult neighborhood with undiagnosed ADHD and parents who hadn’t had a formal education. But after a plea from his father to focus on learning, a sixth-grade Farid set out on a mission against the statistics to improve his family’s circumstances through education. He was pleased with the hope he gave to his family as he earned his PhD, but he shares that he wasn’t satisfied. He felt it was his responsibility to give this hope to others as well. This desire led him to found Learn to Succeed to help youth in the socio-economic periphery of Israel. Farid uses the platforms he has in academia through his AI research to bring in children and teens and inspire them to study and succeed. He explains technology will be another tool he can use to help kids in need. Click Here For More 20MinuteLeaders You're doing incredible AI research. But I want to understand the person behind the doctor. Take me back.

I was born in a very difficult neighborhood in Ness Ziona, to beautiful parents. But unfortunately, they were not fortunate enough to have a formal education. The future was dictated by those consequences. They had to work three jobs each. I had severe ADHD that was diagnosed much later on. I became a very upset and very violent kid. I was the “problematic kid” at school.

One evening, my father told me, "Maor, learn so you won't become like me." For a child, when his parent tells him that he shouldn't become like him, it breaks something inside his heart. I didn't know what studying was. I didn't know why it was so important, but I knew this was the goal of my life. The main goal is a better future for my parents, a hope for my younger brother and sister.

What is that switch like? You can’t just change your friends or move to a new city in one day.

Yeah. But you can start the war in a single day, even in a single second. I started a war. A war not against the specific person, not against the human being, but against statistics. I knew that this is the war that I have to fight, not for myself, but for them. I imagined that I am leading an army of people that are not really collaborating with me, but put their hopes on my shoulders.

How old are you then?

I was in sixth grade.

Is this an immediate switch or a gradual switch? 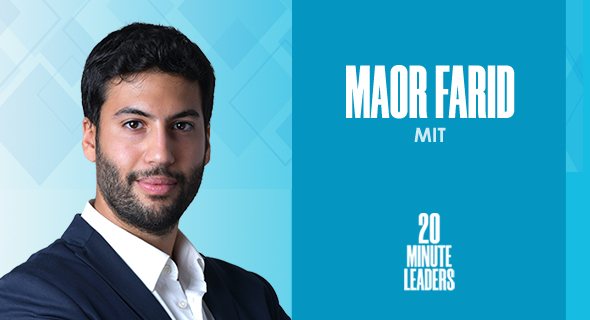 Walk me through some of the milestones.

My bigger goal in life is to help them to close their circles. Because I know that when you have a dream, the next thing that you're going to have is hope. When you have hope, you can't lose any war. Maybe you can lose several battles, but you won't lose the war.

What does it mean to learn to succeed?

First, you have to have a dream. When you have a dream, you don't have time to rob banks and be the violent kid. You have to accomplish something. You have to be in a process. When you understand that you are inside the process, all the other skills are emerging in yourself. Then you are committed to the process. You know how to organize your time, schedule, etc. Everything is derived from this dream.

How do you take this deep understanding and deep conviction and instill it in others?

I think that scale is the word that is so important. I know that I can't do it by myself. This is why I wanted to make this word spread across people who were those children. My colleagues today that graduated from the social and economical periphery, I told them that their goal is exactly like mine. Their goal is also to fight statistics. And they can't do it by themselves. They have to join this movement called "Learn to Succeed" (Lilmod Lehatsliach) and teach others.

Now, as you continue through your milestones, what part does this play in your life?

Everything I do, this goal is with me. I see all the other things that I do as platforms to make this phenomena expand. For example, when I'm doing research at the Technion, I host open days of the Technion for youths. I bring people from the periphery to the campus and show them the labs and everything. Albert Einstein said, "Example is not the best way to educate. It is the only way to educate." In all my endeavors, I keep this in mind, and I remember where I came from and bring those youth into those corridors to be inspired.

Give me a taste of the really cool things that you're doing intellectually. You're also doing incredible research.

My research at the Technion and MIT is a joint work between them. We're studying chaotic systems or stochastic systems and predicting disasters in those systems. For example, a fluttering wing of airplanes, earthquakes, and a leakage in nuclear reactors, using AI and the concept of chaos theory.

In Learn to Succeed, I am the founder and CEO. We're expanding every year. Currently, we are helping 5,000 youth at risk every year to find and pursue their dreams. I'm also the director of the Israeli Center of Scientists at MIT. I'm also in the program of Emerging Leaders of the Harvard Kennedy school.

What does it all come down to? What is the goal and vision?

The goal is to shrink the gap between the socio-economical periphery and all the other populations in Israel. It's not only for the next year or two years. This is for my entire life. This is the thing, and I will do everything in my power in order to do that. Currently it is through the NGO and through academia. In the future, maybe, it will be through business.

I work with thousands of children across the country, but several kids are very close to my heart. I had one kid that I was calling every week, almost. When COVID began in Israel, I knew that the economic situation was deteriorating. His father was struggling in order to earn the minimum wage in Israel. I was contacting him almost every day. Then he stopped answering the phone. Later, I discovered that he committed suicide. I take it as a personal failure.

I can talk about being fascinated by science and by computers, but those are platforms. The most inspiring thing for me is giving hope to my family. This is the strongest thing possible.

As a child, it was hope for my family. Now, it's hope for the people.

What are three words you would choose for yourself?

Hope, simplicity, family. I see the people of Israel as my family and also the people of the world because we are part of a huge network, a living network.