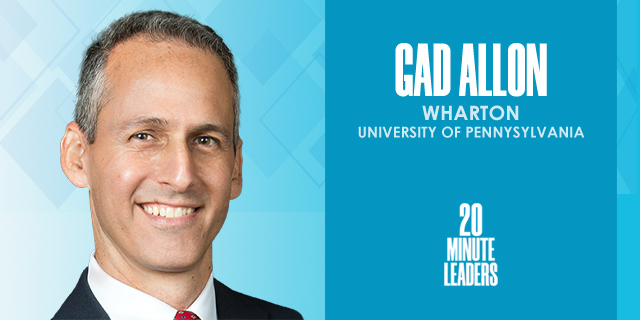 “I feel strongly about being applied. So, I like things that have an impact on real people.”

Though Gad Allon is a professor of operations, information, and decisions with expertise in studying the gig economy, his interest in learning extends to many other fields. Every summer, Allon chooses two topics to learn about, usually a philosopher to study in depth and an on-the-ground topic. He also challenges himself to learn a new coding language every year, even though programming is not part of his full-time work. Allon believes it is important to keep learning and moving out of one’s comfort zone after finishing school. Recently, his work has focused on researching the gig economy, which extends far beyond Uber and Lyft. He shares that freelancers have been around as long as civilization, but the shift in our economy toward this type of work requires new thinking about labor economics. Allon says managers will need to learn how to better find and organize freelancers into their companies.

Gad, tell me about what you work on.

I'm originally from Israel. I worked first in Israeli startups; PhD at Columbia; 11 years at Kellogg; and now, at Wharton and at Penn as director of management and technology. My background is really in two adjacent areas: game theory and economic theory, and also queuing theory and operational theory. A lot of what I do is really about areas where you need to understand the nitty gritty of processes and also how they embed themselves within a situation. The intersection of these two can be platforms, supply chains, or the gig economy, which is where I spend a significant amount of time now.

Tell me about the gig economy on a high level, and then tell me a few key concepts from daily life.

There is really nothing new at the very high level. Since essentially the dawn of civilization, almost, you’ve had freelancers. When we say gig economy, the names that come to mind are Uber and Lyft, but also Upwork and the Israeli Fiverr. All of these are essentially riding on the fact that all of us have a mobile device or laptop, and so continuously they're able to match people that have a need.

I'll give an example. When I started teaching, I realized that I needed new gear and skills to teach online. Once you get a good microphone, you realize the limits of what you know. I went on Upwork and found a sound engineer. We spent an hour on Zoom; I have an amplifier here and we optimized every level of that. Wharton, where I work, cannot employ a sound engineer. He doesn't want to work with someone like me (full time).

When people think about the gig economy, we tend to think about Uber and Lyft. But to me, at least, there are endless opportunities in trying to match between what people really want to do and the people that have true needs.

You're also picking up on some interesting trends coming out of the pandemic. For example, drivers.

If you tried to call an Uber over the last month, you’d notice two things: very high prices, more surge pricing; and significantly longer waiting times. It is because of two things. Demand actually has been going up, but not significantly. The main thing is that drivers are reluctant to go back to work.

When COVID started, we noticed that the drivers kept on driving. The decline was primarily in demand. But what we're seeing now is actually we see the drivers are slower to come back. Most of them say, "Most of these firms treated us the same way that the cable firm is treating us. They lure us initially into the service, they lock us in, the moment we're in, they start lowering the incentives.”

When you ask them why they are driving for Uber or Lyft, they say, "I want flexibility." But in fact, flexibility is not what they look for. They look for consistency. I'm not very optimistic for Uber or Lyft specifically because it shows you what's going to happen in the gig economy in the future; you always have to compete both on the demand side and the supply side.

When it comes to drivers, our data shows that 40% of them multihome. Most of us, when we decide on where to work, it's usually once a year, once in two years. Here, you see people that make decisions almost every 15 minutes. It really requires us to rethink a new type of labor economics to try to understand. I'm not just interested in Uber and Lyft; I'm interested in the entire stack because over time, more and more of our employment model is going to move to something like that.

What does this actually mean to the leaders, the people that are thinking through these models?

There are two things. One is we trained our managers to think very much consumer-based. The second thing, one of the main capabilities that we'll have to have is to manage many stakeholders and manage many different employees that are not your employees. In the future, the best crypto expert might not be your employee, but you need them for five minutes in a year and you will need to know how to orchestrate it. I don't think we are ready. We're definitely not training our managers to think like that yet.

What does it take to become a thought leader in this space? What type of thinking does it require?

In "applied theory," I look at areas that require building theory but are very applied in the sense of taking firms deeper into what they do. What motivates me is looking at problems that from the surface look simple. You say, "Well, drivers don't show up to work." I started getting deeper and deeper and deeper, and I tried to build very rigorous models that really look at each and every driver.

One of the things that I enjoy doing more and more is writing my newsletter, where I try to take exactly these ideas and boil them down into something that I can explain in a thousand words to someone that is not in the classroom. Academia is the constant question of every question raises a whole set of questions. If you like that life, of every time finding more questions than answers, academia is a perfect life for you.

Do you see yourself evolving your questioning also on everyday things that aren't connected to your research?

Yes. I tell my students that after taking my course, there will be a new set of questions they will always ask themselves. They will not become happier people, but they will become more informed people.

I'll give you just one example. A few years ago, I was invited to give a talk on how my research is relevant to Israel. My point was it is actually not relevant. Queues are the same in Israel and everywhere else. But I gave a few examples of where queues are different in Israel because people tend to cut the line. Then I took that joke and wrote a very rigorous paper about the repeated game theory model. One of my most fun papers to write was exactly about this topic. So, many times it's something that even you don't think is actually worth the paper, but once you go deeper into that, you realize that there is a really interesting question here.

Take me back to middle school. What really fascinates you?

I was fascinated with software from a very young age. I have programmed since I was very young. To this day, I still like to take a new language every summer and learn how to code. The notion of building software and building things is still something that fascinates me.

What really inspires you right now?

Every summer I choose two topics to study: one very on-the-ground topic and one very ambitious topic. Ultimately, at the end of the summer, I'd become a little bit more informed, not very informed but dangerous enough to actually talk about that without actually knowing too much.

Every summer I try to reignite this process because when you're in school, you learn just by osmosis sometimes. You get things to do and you learn. Once you're beyond that, you need to create a system that continuously takes you outside your comfort zone.

Gad, what are three words you would use to describe yourself?