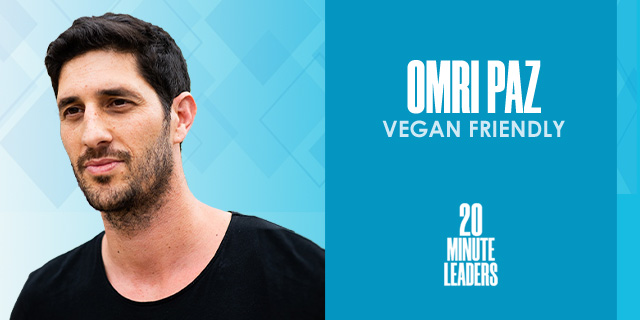 “I was obsessed growing up with what's right and what's not right, finding justice.”

Less than ten years ago, Israel was one of the least vegan countries in the world, Omri Paz shares, but today it is the most vegan country, with 5% of the population following an animal-friendly diet. Paz has been part of the change, founding and leading the organization Vegan Friendly. It takes a two-pronged approach to growing veganism. It works to increase accessibility to vegan products as well as raising awareness of factory farming practices. With rising supply and demand, more people are able and willing to make the switch. Paz explains that he has always had a strong desire to find justice, which led him to law school before he was exposed to factory farming practices and became vegan. He wants to be someone who can make a difference in the world, and with Vegan Friendly, he says he is helping animals, the planet, and people’s health.

You're one of the leading figures in the Israeli vegan scene. How did you get into vegan activism?

Everything started when I was 29. I was exposed to a graphic video of what happens in factory farming. That changed my whole world, and I became vegan and decided to be also an activist.

I started Vegan Friendly in 2012. What we're doing is trying, on one hand, to make veganism accessible, for it to be easy to become vegan, and also, to raise awareness of what goes on in factory farming. It was basically only me in the first four years. Now, we have over 30 people on staff. We also expanded to the UK last year. Next year, we'll probably expand to the States.

Give me an overview about veganism in Israel and globally.

When people say "veganism," they can think about lots of different things. But for me, what it means is not hurting, exploiting, killing animals when we don't have to. It has an amazing benefit for the animals, the planet, and our health.

Up until 2012, veganism almost didn't exist in Israel. It had just one percent vegans. Now, Israel is the most vegan country in the world. We have over five percent. That's a 400% increase. If you look at the vegan category in the supermarkets, it exploded, 10 to 30% increase every year from 2012 to 2020. 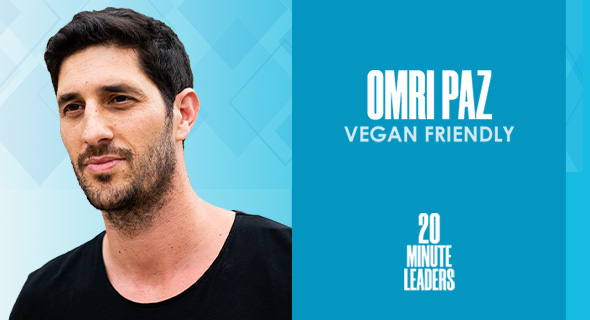 Why do we see such a huge surge in veganism, specifically in Israel?

What started everything was a lecture by Gary Yourofsky. It got about 2 million views in one year. Because Israel is a small country, if you have a hundred thousand people, that's a percent of the population. And things travel really fast, especially through social media. When the activists and the organization started creating viral videos about factory farming, then that's when people decided to ditch eating animal protein. I think we have people that are not afraid to say whatever they think. It's relatively easier to find vegan food in Israel because of the Mediterranean diet and also because of the culture.

What do you think needs to happen for the world to make this big shift?

One option is that it will continue to grow gradually until we get to the critical mass point, which we believe is about between 10 and 15% of the population. The second option is that we'll get a situation that's so bad, probably through climate change, and countries will have to address this issue very seriously. Another option is technology. If you have lab meat, or really advanced technology that allows you to have good vegan options, and it becomes very cheap, then that's something that can accelerate the practice. There's a good chance that they'll all happen at the same time.

Basically, most people are vegan right now in the way that they think. Almost all people wouldn't want to kill the animal themselves or watch how they kill animals for their food. But there's still a big barrier between what we eat and what we see on the plate and what happens to the animals. The only thing is to connect the dots.

When you're talking about the human body, what do we know today about alternatives to meat and if we need meat?

What is your strategy within Israel to expand the Vegan Friendly movement?

We have two aspects that we concentrate on. One is making veganism accessible. We have certification on products and businesses. We have huge events. On the other hand, we try to work on raising awareness through the campaigns, just like “The 10 Million Lecture” and a TV ad. We believe that we need to work on both of them at the same time. If we only work on expanding the vegan options but we don't have any demand, then nobody will buy it and it will get off the menu. And on the other hand, if you only work on raising awareness and we have lots of people wanting to become vegan but they don't have any options, that's also very difficult for them and won't work.

Even though we're a nonprofit organization, we try to think as a company to build win-win business models that will benefit everybody instead of just asking for donations every year. At Vegan Friendly, we have a symbolic sum that the businesses pay us, and we, in exchange, advertise that they have vegan options. Then everybody benefits. The businesses get new customers. We get money to sustain our project. More people can consume vegan options.

Even in the donations, what we did is we established "vegan active." Donations go directly to a campaign that they believe in, so they can choose. In exchange, they get benefits and discounts in almost all of the businesses that we certify as Vegan Friendly. They can donate and actually save more money than they donate. This concept was extremely successful. We have more than 6,000 donors.

Do you see a shift in the organizations that are producing these products in their willingness to consider? Are they maybe starting to think about it themselves?

For example, take a carton of milk. They profit between five to 10 times more on a carton of soy milk than cow’s milk. Their profit is maybe three to four percent because of all of the things that they need to do with the cow. With soy milk, you have 92% water. You have 7% soy, which is extremely cheap, and salt, and maybe a couple more ingredients. At the moment, the vegan population is stronger financially. So they can also charge a higher amount. There were a couple of years where they made money in the dairy category because of the plant-based cheese and milk. Everybody knows it's going toward there.

I was obsessed growing up with what's right and what's not right, finding justice. That's something as a child that definitely resonated with me to become a vegan and then establish Vegan Friendly.

First of all, my team. I see amazing people that wake up every morning and just give everything they have. And just sometimes, I look at them from the side and I think to myself, "What amazing people." They inspire me.