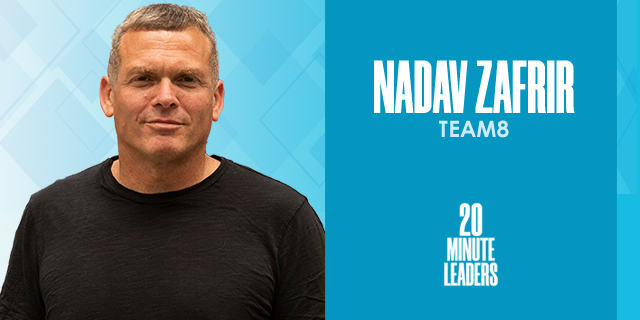 “I think technology,digital transformation is going to have a larger effect than ever on our lives"

Nadav Zafrir, co-founder and managing partner of Team8, joins Michael Matias to discuss technology and the role of leadership

The role of leaders has shifted, especially in the military, says Nadav Zafrir, co-founder and managing partner of Team8 and previously commander of 8200. Leaders used to show their teams where they were going and also help them get there. He shares that now leaders have to trust their teams to find the way to get there because the challenges are new and technology is changing so fast. This kind of bottom-up innovation is possible even in a very structured setting like the military because of the constant access to top talent. Zafrir explains that it is important to set up a failure-tolerant environment, even though it is tough to live with the consequences of those failures at times. He sees opportunities in challenges, and he believes we have some amazing capabilities that will help the world tackle the major problems it faces today and achieve better outcomes.

Tell me a little about you.

I like to look at the world as a place of opportunities. I'm constantly looking at the way the world works, at the way that people act. I'm trying to figure out opportunities, challenges. When I do, I get obsessed about it. I usually surround myself with people that are much more talented, smart, and knowledgeable to find hacks into the future.

Tell me about your army experience. When you go into the army starting in combat, do you know that you're going to become the commander of 8200?

No. I grew up in South America. I came to Israel when I was 18, and three weeks later, I was doing my basic training in the paratrooper. For someone that didn't grow up in this country to immediately get into this melting pot and see all the different people, perspectives, and religions, with people from all over the country, it was a very intense experience. I felt it gave me new opportunities all of the time.

When I look back at my 25 years of service, I'm probably one of the luckiest bastards that ever joined the IDF. I found myself in areas where things were reaching a plateau in terms of their relevance. 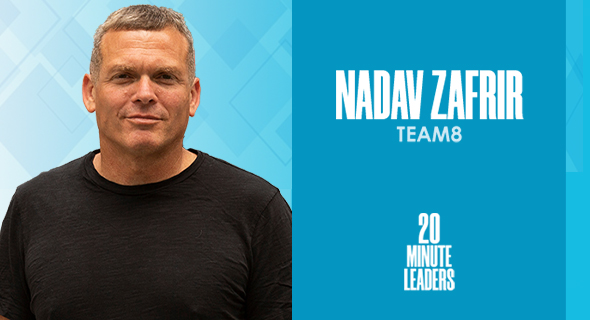 I remember my entrance into the IDF. It's hard. What allowed you to look so optimistically at the bootcamp?

I don't want to sugar coat it. The first stage was okay. Hamam el Maliah, the next stage, I was pretty miserable. As a child growing up, I was a geek. I started coding, and it blew my mind that you could write something and the machine would do something. When I came to Israel and they asked me what I like to do, I said, "I like computers." But I was jumping out of airplanes. Years later, when I joined the special ops within intelligence, whenever there was something technological, I would focus on it.

I was very lucky because amongst the combat guys, I was considered a really good technologist. Amongst the technology guys, I was considered a superior combat guy. I was mediocre at both. But it turned out that they were looking for someone that could take these two things together. I joined Guy Sela in 81. We started bringing people in. We started exploring this new phenomenon of the internet. At the same time, our rivals also changed. We saw a shift into non-nation states, quasi-nation states. Terrorism became ubiquitous and a big threat. All of this came together. We started to take advantage of it for our cause. That's sort of the birth of "cyber."

Going back 20 years where "innovation in bureaucracy" was not very common. How do you bring innovation within perhaps one of the most structured companies in the world?

It's counter-intuitive. But innovation in organizations like 8200 is very simple for a very unique reason. You have direct, no-compete access to the most brilliant minds on a nation-state level, in an evergreen process, and that is unmatched in any other organization in the world. Mandatory service means that you could start screening individuals while they're in high school, and if you can take advantage of that, nothing will stop you.

In 8200 and 81 today, and others, the biggest secret is that it's a bottom-up innovation process. We used to think that leadership should show where we want to go and help you figure out how to get there. The people that made the hardest, toughest, most important decisions in a military environment were the people that had the most experience. That doesn't hold true anymore. As the pace has changed the environment, the technology, the way these two interact accelerated dramatically. Leaders could no longer tell anyone how to get to anywhere. Nobody's ever gone there, and the technology changes as we speak.

It means that if you choose the right people with the right aptitude and you don't try to understand what they know right now but how fast they could learn new tricks, and you create the right environment, infrastructure, and culture, you start realizing that those individuals will show you how to get there. Every once in a while, there will be a tremendous breakthrough.

I always knew that if I had an idea where I had to divert from the structure but it could have a one percent chance of succeeding, I had full autonomy to do it.

That means that in 99% of the cases you will fail. You need to create a failure-tolerant environment. Just saying that we're failure tolerant is very easy. Taking the chances and giving the support and understanding that there may be serious consequences and living with that and embracing that is tough.

Taking all of this experience, what does this mean today with Team8?

It goes beyond Team8. If you think about it on a global level, we have seen unprecedented change. I think we are going to experience what we did somewhere in 2007 or 2008, where by coincidence different technologies matured at the same time. If you think about AI and machine learning, the potential of new technologies, and the cloud, I think we haven't seen anything yet. I think COVID accelerated all that dramatically. From that perspective, I think technology, digital, digital transformation is going to have a larger effect than ever on our lives. I think that what we've seen in the last two years just gives us a glimpse of what's possible.

We have managed to do two things that are bringing a lot of optimism, for me at least. One is that we've managed to work remotely through this global pandemic. And two, the advances in medicine and specifically the ability to come up with vaccines in an unprecedented short time; a lot of this has to do with the access to data and the ability to process data. I think that's going to affect every field of life.

We're in Israel, a place of privilege. The reality is that the majority of people in the world don't have access to a doctor. With digitalization, we're actually bringing people into our economy and the life that we knew before.

Absolutely. But we have another privilege as Israelis. We're at the forefront today of the ability to have a global impact. That's just not not just privilege; that also brings a lot of responsibility. When I look at the global problems, opportunities, challenges, when I look at Israel's position, which is unbelievably unique and this evergreen push of talent from units like 8200, there's an opportunity here.

One of the things that we realized in Team8 is that I think we can do much better. Early-stage ventures haven't changed in the way they're put together for decades. In many ways, the sieve that we look at to identify entrepreneurs is broken. One reason is capital has become commoditized. Entrepreneurs needed to compete for capital; today it's the opposite. It means that you have to find a new way to deploy capital.

At Team8, we're building a platform that brings together the ability to strategically understand what's broken in areas we understand. We're bringing the brightest accomplished entrepreneurs; BizDev, marketing, and research people; and technologies to try to identify what's broken. Then we're trying to create another meeting place between: challenges and problems; hungry, talented, capable entrepreneurs; and capital. We believe that this new kind of mash between these three will lead to dramatically higher probability of success and impact.

My father was an entrepreneur. I grew up in this environment where you're trying to look at the reality, what we want the reality to be, and what we can do about it. The fact that my parents moved from country to country actually was inspiring for me.

Where do you gain your inspiration to keep working so hard?

The world is screwed up. We probably never had bigger challenges or threats. On the other hand, we have these incredible capabilities. What I'm inspired by is how do you take these challenges, capabilities, and opportunities and try to avoid these stark outcomes and have a better outcome.

I was never the smartest guy in the room. But trying to put together these minds that have the critical mass of knowledge, inspiration, motivation, and do something about it, whether it's in cyber, in energy, in climate: that's what gets me up in the morning.

If I were to ask anybody in Team8, how would they describe you in a few words?