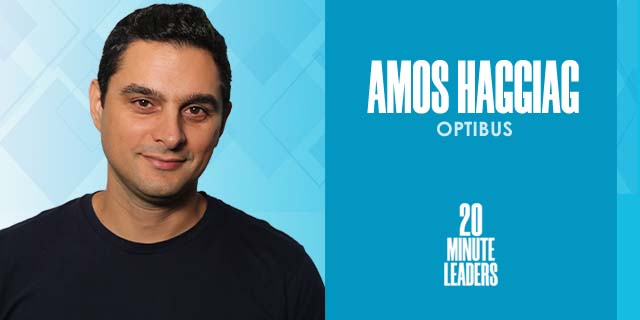 “If you look at the long term, the vision and mission are what counts. That's always optimistic.”

The journey hasn’t always been easy - and Amos Haggiag, CEO and co-founder of Optibus, says he tries to focus on the long term and the mission of the company

Though Amos Haggiag was aware of the problems that public transit companies faced when planning their routes and networks, it took years before the now CEO and co-founder of Optibus was able to help create a solution, and still longer for him to devote himself fully to the startup. He shares that he was previously working at Microsoft and really enjoying it, so taking the risk of leaving to start his own company was a difficult decision. But after discovering that the problems in optimizing public transit were worldwide, Haggiag decided to take that risk. It has paid off, and Optibus is now helping to plan and operate mass transportation worldwide. He credits the company’s growth to its ability to quickly and accurately show prospective customers the ROI they can expect. The journey hasn’t always been easy, though, and Haggiag says he tries to focus on the long term and the mission of Optibus.

Amos, who are you? How did you get to start a company in public transportation that operates around the world?

We founded Optibus in 2014. But the story begins years before. My background is in tech. I studied math and computer science back in 2004. During my first year at the university, I met Eitan Yanovsky, who later became a co-founder of Optibus. My father was the CFO of one of the largest public transit companies in Israel. He was telling me about the problem of planning transit systems and how it was being done then.

Planning of public transportation involves many different things. It's planning the routes; it's planning the network. Where should the route go? Where should we allocate stops? What should be the frequency of the timetable? But it's also a lot about resource allocation. How many drivers do you need? How many vehicles?

Public transit is quite an expensive business to run. Even small cities will spend around a hundred million dollars a year running a public transit system. London has about a 17 billion annual budget for public transit.

My father told me that this work was all being done manually. It seemed to him like suboptimal decisions were being made by people based on personal experience. We eventually learned what an amazing job they were doing. But think about having to do everything manually and to make decisions from billions and billions and billions of options. We didn't have any clue of how to even approach that then, but at least we knew that there is a problem.

I then went to the US, to Princeton. I did research around medical imaging. Later on, I worked with Microsoft on Cortana, their personal assistant. During that time, we basically started at the beginning thinking about the problem. Then we had some ideas about how to solve it mathematically. It was nothing compared to what we have today, but it gave better results than the solutions that the industry was using before. Because it was much better, we had public transit agencies who wanted to use this magic called Optibus that can take the entire transit system of the city and optimize it in under a minute.

If I were to design a transportation system within a city or a new city, what are some things that I need to consider?

Basically, when you look at strategic planning, you look mostly at demand and budget. So, where people live and work. It's not only about where's the biggest demand, but where the people are who need transportation the most. You take all this into account, and you build a network, a set of routes and timetables for different times of day and different days of the week. That's what we call planning.

The second part is what we call scheduling: how many vehicles you need, how many drivers, what type of vehicle, when the driver gets to work. Then the last part is the actual operation. Optibus is like an operating system for public transit. It does anything from thinking about what you should design to actually operating it right now.

If you're designing a whole city, you start from what should be the network. But usually, there is an existing transit system and we want to improve that.

You're building this fantastic idea with a big pain point with deep technology. And all of a sudden, you're working with agencies all around the world. What is that experience like?

I'm always really excited about that. Optibus is actually responsible for powering almost 50% of the entire public transit network of the entire UK. Also, we’re operating in the US, Singapore, Hong Kong, and Brazil, among others. I'm still amazed by the fact that we have such an impact in so many places in the world.

It was really, really hard. And it's still hard all the time. You need to work with the large transit agencies who are asking why they should change. We developed methods of showing the value of our system before someone needs to make a decision to purchase. We can take all the data, put it into Optibus, run all the algorithms, and show them how it can look before they start using the system.

We started in Israel. We were lucky enough to start with the largest public transit company, Egged, which is doing almost 50% of the country’s public transit. I think the enterprise customer brings so much value to the development of the product because they have the highest requirements. Then very quickly, we grew to about 90% of the market in Israel in less than two years.

To what do you attribute the fact that once you go with Egged, all of a sudden you have the rest following suit?

I think what was really helpful is that we can show the ROI very accurately and quite fast. We would go to a public transit company and tell them, "Hey, instead of a hundred million, you can run it with 90 million." If you think about the public transit company that works on a margin of 5%, 10% more or 5% more is a big, big deal. I think that was the main factor why we got quite fast growth. You see this ROI, you can't really ignore it.

Were there culture adaptations that you needed to do as you were branching globally?

We started in Israel. Then we moved to the US. The first deal in the US, by the way, was done all through LinkedIn messaging. Then we moved to Europe, the UK and then Germany. I think what we learned early on is that public transit is quite similar all over the world. Public transit, in the end, is about vehicles, drivers, moving people around.

But what is very different is that each company and each agency has very different rules that they go by. Once we understood that, we built it into the product. You can customize it fully.

What we did learn after a few years is that, in terms of the go-to-markets: sales, marketing, and customer success, you need to have people on the ground in different languages first. We have offices in many places: different places in Europe, the US, and Brazil.

Before Princeton and Microsoft, was there any part of you that felt you were going to go into this world or this type of role?

I didn't think that this would happen back then. Even after the years that we worked on Optibus, we had a product, it was working, we had customers—and doing all that while I'm working a full-time job with Microsoft—I wasn't 100% sure that's what I'm going to do.

I was in a really good place. I really liked working at Microsoft, and I was successful. You don't want to leave a place like that. A startup is always about risks. You're not really sure. But at some point, we really needed to make this jump.

We did a lot of research, and we understood that there is a big pain point. We saw all of the public transit in London. All of their routes were planned using this one huge Excel file.

What are a few words that you think your colleagues would use to describe you?