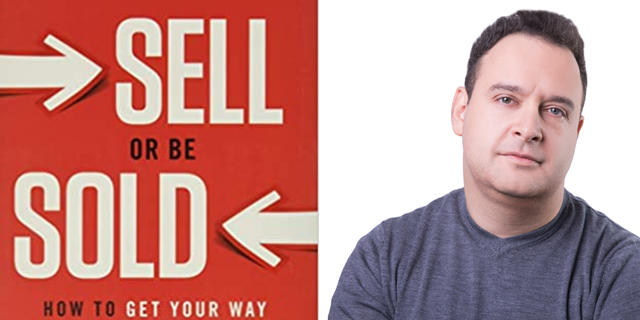 Leonid Belkind, Co-Founder and CTO of Torq, shares insights after reading “Sell or Be Sold” by Grant Cardone

Leonid Belkind is the Co-Founder and CTO of Torq, an automation platform designed for security and operations teams. He has joined CTech to share a review of “Sell or Be Sold” by Grant Cardone

Title: “Sell or Be Sold”

Leonid Belkind is the Co-Founder and CTO of Torq. Photo: Guy Hamoy/Amazon

Summary: "Sell or Be Sold" by Grant Cardone, subtitled "How to Get Your Way in Business and in Life", presents more than just an approach to becoming a sales professional (as the title may imply). As the book unfolds, the reader understands how Cardone turned his strong desire to succeed into a way of life, nothing less, focused on convincing others to follow his lead or opinion. Cardone's uncompromising view on every interaction in life, personal or professional, being a model for a sale, partnered with an accentuated internal locus of control putting one's self in command of every situation, defines a uniquely presented model on perseverance in an environment where you define success as a definite goal, rather as just an option (alongside with a potential failure). Whether you accept Cardone's way of life as your own, or just take the elements/ideas that appeal to you into your own approach, the book has a lot to offer. Cardone merges "who I am" and "what I do" into a single holistic entity, dictating every aspect of his life, from the time he wakes up, through the way he dedicates time to his children, how he chooses where and how to have breakfast and lunch, and so on… If you choose to combine the written book with the audiobook, presented in Cardone's own voice, you get an extra color and outlook on his unique personality and approach.

1. Importance of Being Sold (Yourself) on the Subject The very basic foundational principle promoted throughout the book is the importance of being sold (i.e. being convinced) on the product/service or idea you are selling to others. The book stipulates that you simply cannot give your absolute best to convince others to buy something without being 100% uncompromisingly "sold" on it yourself. Always using and, if you can, buying the products that you are offering, not hesitating for a moment to share your own experiences, and not missing a moment to "project" you being 100% solved in the absolute superiority of your offering over anything else. Even the smallest shadow of doubt should be eradicated before you can fully submerge yourself in becoming the absolute best "salesperson" for any product, service, or idea. 2. Internal Locus of Control While many people may consider the success of the sale being dependent not only on themselves but also on the prospects' willingness to buy, the book positions internal locus of control when it comes to success as a salesperson as the only possible position. Being convinced that selling more than others is 100% up to you, debriefing any lost opportunity to understand what you could have and should have done better, practicing perseverance not only in a single interaction with the customer but across your whole activity - these are the things that will differentiate a successful salesperson from a less successful one. Similarly to the previous point on being sold on the product, being convinced that your success is under your full control serves as the basis for pretty much anything else. 3. The Decision to Become a Sales Professional A dedicated chapter in the book deals with the perception that sales has as a profession in the eyes of people who are not defining themselves as professionals. Sales being treated as not necessarily something that requires knowledge, or skill, or excellence. To achieve the confidence and to "become sold", the book offers an absolutely solid moral foundation for defining one's self as a "salesperson", providing real value and benefits to one's customers, being super transparent regarding your sales process, being proud of who you are and what you represent. 4. ‘Massive Action’ to Reach Your Goals When considering an interaction with a prospect, faced with a dilemma on whether to take a certain course of action or to avoid it, the book offers an approach called "massive action". The approach talks about taking a vast amount of activities, communications, suggestions, and more. While acknowledging that this approach can and will create new challenges, the approach stresses out that any action not taken surely amounts to missed opportunities. The famous Wayne Gretzky quote saying "I missed 100% of the shots I didn't take" summarizes this point really well. 5. Focus on the People and Their Needs An initial instinct of any person presenting an idea, product, or service is to focus on their offering and invest most of the time in explaining it. The book presents a well-motivated alternative approach, where first, the focus should be put on the person (prospect, in many cases) and in understanding their needs, desires, constraints, and urges. Time invested in learning these will allow choosing the suitable product and spending the time (that should be brief and focused) presenting it focused on things that will matter and will impact the buying decision. As a theme across the book, focusing on people and value, rather than on price allows working around different concerns and constraints that the prospect might have. 6. Agreeing with the Customer/Prospect One of the most important principles of any dialog with a prospect is expressing an agreement with them. This doesn't necessarily mean succumbing to their demands or pressure, but hearing their point and acknowledging that you view it as a legitimate one from their end and agree with it. As an example: handling objections such as "the price of your service is too high" should begin with acknowledging the customer's view by saying the equivalent of "I understand that you see it this way and agree with you" and following up with explaining the reasoning for the cost of the service/product, accentuating its value finding ways to move ahead. Arguing with the prospect, vocally disagreeing, or trying to push your point of view while dismissing the one expressed by the prospect will never result in any progress - a point I personally agree with above anything else.

7. Being the Most Positive and Energetic Person in the Room

Not reiterating the previous point, but setting a very important baseline: being super positive and energetic makes a memorable impression on anyone. Being remembered as positive, driving action, willing to provide value, and being professional serves as a very good basis for people to want "doing business" with you. The book stresses out the need to "stand out" in this aspect, even to the point of causing people to ask you questions such as "why are you so positive, what's wrong with you?" What I’ve Learned: I've learned to respect Cardone's "total" commitment to his way of life and to achieving success. I also felt empowered to understand the clear ideas about making a successful sale, feel confident about a position, and use clearly defined (and logically motivated) approaches to interaction with prospects and customers. Being an entrepreneur, taking leaps of faith, and convincing others to join you fits the presented models quite well. Being focused, proactive, energized, and, above all, centering on the people you are interacting with are all very applicable lessons to the daily routine of every technical entrepreneur. Critiques: It is difficult (if not impossible) to criticize the book, as it isn't a mere description of an approach, but a very emotionally phrased expression of a "way of life", written by a renowned sales coach and a successful entrepreneur. Cardone "delivers himself on a plate" in this book, explaining his position, strengthening it with various examples, convincing in various possible ways. One thing some people may find challenging with the book is the uncompromising nature in which Cardone expresses his opinions. He doesn't leave any place for doubt - approach ‘X’ is the right one, everything else is wrong. Since the book is presented from a very personal point of view, belonging to Cardone himself, I didn't find this bothering. In my opinion, this level of confidence and "being sold" on the approach comes with the territory and the book would make a lesser impact if it presented similar ideas in a more impersonal or more objective way. Who Should Read This Book: Entrepreneurs founding companies. Especially technological entrepreneurs that find themselves in a position where they need to influence decisions made by investors, partners, prospects, etc...