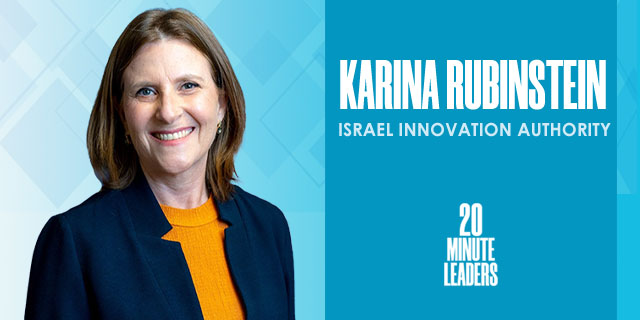 “Creating ecosystems in the periphery is part of my passion.”

With twenty years in business development for startups, Karina Rubinstein has a lot of experience in many verticals that she brings to her role as director of business development in the Israel Innovation Authority. She shares that the vast majority of her colleagues at the Authority also come from the hitech industry. Rubinstein thinks that helping them to do things differently than other governmental bodies, knocking down many walls and challenges along the way. Their out reach has grown as an independent authority, and it aims to create a stronger overall hitech ecosystem in Israel. That includes supporting fields that don’t have much private market and creating stronger infrastructure for startups to grow on. They seek ways to have more established and complete companies in Israel as well. Rubinstein explains that incorporating the periphery of the country and underrepresented populations is something that she’s passionate about, though the progress is slower than she’d like. Click Here For More 20MinuteLeaders Karina, tell me a little bit about yourself and your role within this ecosystem.

I joined the Israel Innovation Authority four years ago. I come from the industry. I spent more than 20 years doing business development for startups. Through my years, the experience was piling up. Now what I bring to the table in the Authority is actually a really vast experience in all kinds of verticals.

Someone told me this morning, "You are like the Disneyland of opportunities in the Authority." I think myself and the team all look at: How do we create more impact? How do we help the industry? How do we translate the industry's needs into something practical that we can help with?

Israel Innovation Authority as a body: What happens when you put these three words together? What does it mean?

Is this common around the world to have governments creating unique positions to support a startup ecosystem?

I think it's part of the DNA here. We had delegations, before Corona, coming from around the world to see what it is all about. How does this model work? They are trying to duplicate that. But then at the end of the day, you need the DNA. You need the culture mindset.

Fast forward the five years that we have been operating as an independent authority: we are trying to do extensively much, much more than what we were able to do as a government ministry. Our operation is much wider today. We have a relatively big budget, something like half a billion dollars a year. All of that goes to support the industry. We are trying our best to do more and more each year.

What is the model here? Are you a venture capitalist? Are you an advisor?

We are an important investor in the industry. Non-equity, though. Non-dilutive. That has to be said. We are supporting applied research in academia or commercializing IP from academia, as well as singular entrepreneurs with only an idea in their head, early-stage startups, companies, growth companies, manufacturing companies, and the human capital in high-tech. We're looking at, holistically, how we create a stronger impact on the ecosystem here in Israel. It's not only how we support startups in specific areas. We are agnostic to the vertical as long as you are innovative and disruptive.

Nowadays, we are trying to focus our resources in areas where the private market is not there. Our impact is where there's a scarcity of private markets. Looking at climate change, it's really important to have these kinds of cutting-edge technologies in Israel.

Whether it is incubators, innovation labs, other kinds of research institutes, these are also the areas that our budget has been diverted to in the last years.

The Israel Innovation Authority is a governmental body. Startups are used to dealing with the government in terms of the forms to fill out and the long processes. How do you mitigate that difference and the dissonance between the governmental side and the innovation side of the entire ecosystem?

I think part of the reason that people like myself are in the Authority is for us to be more proactive and more reachable for the industry. We are trying to translate it into informal relationships on a daily basis. I'm really communicating on my WhatsApp all the time.

We are now around 140 people, and 90% of us come from the industry. So you're not looking at a government organization as it used to be perceived years back. All of my colleagues in other ministries really are fine people trying to do whatever they can to push forward. But I do think that we understand the complexities and we're trying to do it differently. We're trying to push walls. We succeed some of the time, I have to say.

Karina, what is your day-to-day like at the Israel Innovation Authority, running their business development?

How do you perceive where the ecosystem is now? And where do you think we're headed?

We see a trend of market maturation, where experienced entrepreneurs are creating new companies. Someone asked me a few days ago, "What is the exit strategy?" I was saying, “Maybe not an exit strategy will be the strategy, in a sense.” Having established companies here is a trend that we would like to strengthen more and more. With that, we can really build a strong industry.

I think the other challenge that we see is the problematic area of human capital in high-tech. We have to jump from 10% to 15% high-tech employees from the overall workforce, in relatively no time. How do we bring more people to the industry? Not only programmers. We need more people coming from BizDev, sales and marketing and other peripheral jobs within the high-tech sector that are not pure R&D.

Now what you see is a different kind of a trend with people making Aliyah from all around the world and bringing a very good knowledge in foreign languages and culture. They know how to move around with these skill sets. That is very good for the industry. And beyond doing only R&D here to form Whole companies here. I think these are two of the things that we're putting a lot of emphasis on.

On the other hand, millennials have their own mindset. They're looking at how they create impact. Moving these people from only writing a code to writing a code with an impact is also a trend that we see and we would like to strengthen. I'm talking with a lot of entrepreneurs and people that have only finished the mandatory military service or university and they're looking at how to move on to areas that are creating more impact such as food tech, climate tech, health. I think it's really important to encourage them and to facilitate that trend.

What is your top priority in your role today?

How do we tend more for the periphery of Israel; how do we create more high-tech there. And not just by shortening the traveling time between the periphery and the center necessarily, but how do we create ecosystems of innovation there? It's part of my passion. I have a personal involvement in that. How do we bring more underrepresented populations into high-tech? We did a lot of activity this year around Arab entrepreneurs, Arabs in high-tech, and women. We would like to see more women entrepreneurs. And also, members of the Ultra-Orthodox population. We haven't succeeded in moving the needle so much, sadly. It's something that we put a lot of thinking into.

Michael Matias, Forbes 30 Under 30, is the author of Age is Only an Int: Lessons I Learned as a Young Entrepreneur. He studies Artificial Intelligence at Stanford University, is a Venture Partner at J-Ventures and was an engineer at Hippo Insurance. Matias previously served as an officer in the 8200 unit. 20MinuteLeaders is a tech entrepreneurship interview series featuring one-on-one interviews with fascinating founders, innovators and thought leaders sharing their journeys and experiences. Contributing editors: Michael Matias, Megan Ryan