Amitai Ratzon, co-founder and CEO of Israeli cybersecurity unicorn Pantera, added that: “We want people who know how to take a cool product and translate it into the real world”

“Today, in order to reach the next level, companies need talent that’s been acquired in the real world, and not in Israeli military intelligence Unit 8200,” said Amitai Ratzon, co-founder and CEO of the Israeli cybersecurity unicorn Pentera during Calcalist’s cyber conference which took place online on Wednesday.

Ratzon, who doesn’t possess the classic Israeli high tech background, not serving in Unit 8200 or similar military units, told Calcalist why his workplace experience is so crucial to companies like Pentera. “I have a lot of respect for companies founded by former Unit 8200 expats and other technological units in the Israeli military,” he said. “Their knowledge is invaluable and necessary. It’s really important in order to help the industry succeed. My case specifically happens to be different. I began working for the company when it operated in stealth mode as sort of an external CEO. I joined Arik Liberzon (co-founder and CTO), who served as the Israeli military's head of Cyber Warfare group in the Computer Service Directorate, and had plenty of experience in both defensive and offensive cyber.” 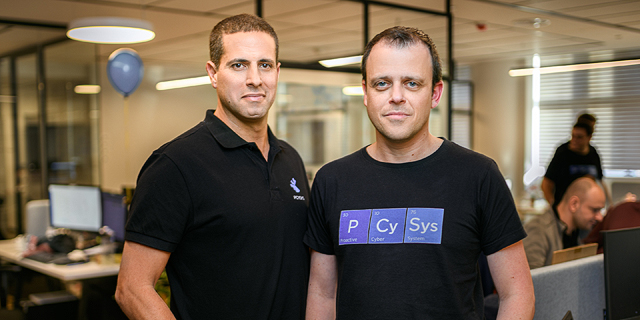 “What I bring to the table is a cardinal product that enables the company to succeed. We need people who know how to take a cool product that has a real effect and translate it into the real world. We need people who know how to build a global sales organization, how to go from zero to a billion dollar-value in three years. Those are things you don’t learn in tech units. They have no connection to the army, but to workplace experience acquired in the real world.” “In the past, I served as a sales manager for many years, and had a strong background in global sales and marketing systems on a company scale, and that’s much more crucial than having technological knowledge. Tech know-how is important in the beginning, so that the venture can grow into an enterprise. But in order for it to go forward, the DNA necessary to help the company fly to new highs is a bit different.” Ratzon also explained what Pentera does. “Pentera provides information security managers the option to answer a simple but complex question: How protected am I from the next attack? And we do this through means of a simulated attack. Organizations around the world that use Pentera can - at the push of a button - put the organization in a position that simulates a cyberattack, and the customer then can get an idea exactly of what the hacker sees. That enables organizations to fix what needs to be fixed, and if the hacker strikes again, then they can simulate it and fix those issues again. The issue of ongoing verification has become absolutely necessary in 2022.”

As for Pentera’s future, Ratzon estimated that it is on its way to becoming an independent and important player in the cybersecurity arena. “Five to seven years ago, every tech entrepreneur’s dream - whether in cyber, fintech, or other fields - was to reach a certain level of revenue and then look forward to receiving a buy-out offer from one of the giants,” he said. “Pentera wasn’t built and doesn’t operate to be acquired. That isn’t our vision. We’re already probably too expensive by now, so even if it was our dream it simply isn't feasible at this point. Pentera wants to continue to operate as an independent company. Our novelty idea in cyber protection is much bigger than it seems - just like Check Point, and Palo Alto Networks were 10-15 years ago. We believe that we’re leading an entire category that has no end or limit. Since our vision and business is so far-reaching, existing companies and other players are simply too small to digest what we’re actually doing. And we’ll become one of those large companies in the future.”