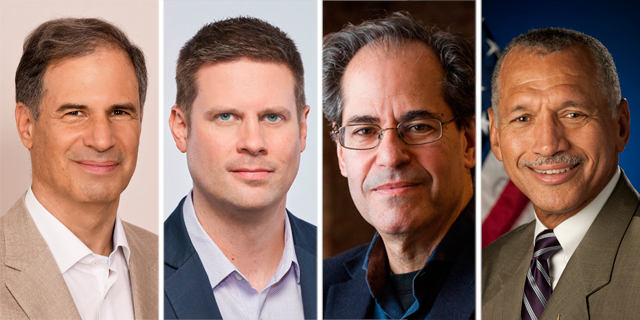 Israeli Space Week, held over the past week, brought together private and public entities who discussed the booming industry at the Ramon Space Conference, sponsored by the Ramon Foundation and the Israel Space Agency, with this year’s theme focusing on searching for sustainable solutions to resolve climate change. Dual-usage technologies may help curb greenhouse emissions, ensure food security, predict weather patterns, and help protect the environment, while allowing the commercial sector to flourish. According to research by Morgan Stanley, the global space industry could generate revenue of over $1 trillion or more by 2040, up from $350 billion. Although it seems as if the commercial space industry is taking over, and turning space agencies into outdated bureaucratic bodies, both can work together to cut back government red tape while maintaining law in order. Space startups need to prove themselves first, noted Christian Maender, Director of In-Space Manufacturing & Research at AxiomSpace, which is sending next-Israeli astronaut Eytan Stibbe and his Ax-1 crew to space in March on one of the first commercial space flights. “Space tech startups can’t raise Seed funding without demonstrating that you can make a buck and grow your market. You really need to prove your business plan. I hope that if we’re all working toward economic benefit together, and building products that are good for humanity, then we continue to drive peaceful use of space.” 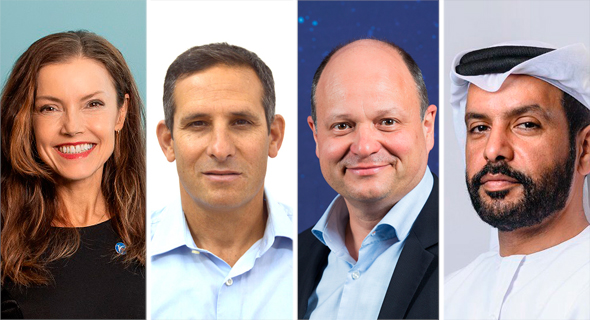 And the unknown awaits. “We are stepping into unknown territory with our mission, and have very little knowledge of spaceflight, but have created a very skilled astronaut team,” commented Stibbe, from Florida, with T-minus two months to go before his launch. “We wanted to open the hatch to as many Israelis as possible, and many Israeli startups are sending their PoCs with me to space.” Uniting public and private sectors “To sustainably exploit space, we need to create public policy that can work with our national supply and demand. Space agencies will continue to play an important role, but we need to ensure cooperation between both sectors. Just like in economic markets, we need some form of regulation to know how to equalize company interests and ensure the means to explore space are sustainable because in space there are no boundaries,” recalled Carlos Augusto Teixeira de Mouran, President of the Brazilian Space Agency. He noted that Brazil needed a data collection system, and worked with local companies to design a small satellite constellation to help civil defense. “We see how Israel supports initiatives designed by other startups that really help create solutions to real-world problems.” But that doesn’t render space agencies obsolete, and aside from encouraging the sectors to align with one another, leaning on academia is also important, noted His Excellency Salem Butti Al Qubaisi, Director General of the UAE Space Agency. “Space agencies can deliver, upscale, and produce innovations. In the UAE, we’re bringing together national research facilities and private sector companies, to unite innovation. Rapidly expanding the space economy will also help encourage future generations to pursue these fields, and we want youth onboard.” And this could also help encourage other new sectors to enter the playing field, said Lionel Suchet, CNES Chief Operating Officer. “Digital revolution and miniaturization of technologies allows space to tackle new domains of activities such as mobility, insurance, and tourism. Space once only revolved around defense and science, but now we’re seeing new actors enter the stage who are willing to put money on the table and invest in space. We can also use space to tackle social subjects such as climate change.” He noted that over the past year, France and Germany helped support 50 startups developing space applications, some whose technologies can be used on the Moon. “Governments now have a new role, and we need to provide them with new financial tools.” He recalled CosmiCapital, a French investment fund, which is helping steer forth that agenda. On that note, newly-elected Director-General of the Israel Space Agency Brig.-Gen. (Res.) Uri Oron commented that the space agency has changed over the past decade, but access to space has become easier and cheaper. “Technology allows us to do much more than ever before, so agencies need to bridge that gap between evolving capabilities and building that space environment as nations’ needs change.” In Israel, he noted that using precision agriculture technology from space satellites has really helped improve crop yield in the Negev desert region. And this is where an expanded workforce and a renewed focus on education can come in, explained Lisa Campbell, President of the Canadian Space Agency. “We’ll not only need physicists and engineers, but also lawyers, financial experts, and project managers for the jobs of the future.” Canada, she noted, helps support students who study technological subjects, and has worked to create a CubeSat project to launch mini satellites. “We’re also collaborating with NASA to help create new ways to develop food for new space missions and also here on Earth to combat climate change.” Looking back at the recently launched James-Webb Telescope, she recalled that space can be a unifying field. “It captures everyone’s imaginations, and gives everyone the perspective we need: we can work together, and find solutions to combat climate change, food security, and the pandemic if we just work together.” Saving our planet with tech And technology is really where climate-awareness all began. Plenty of NASA’s research has been devoted to capturing data on greenhouse emissions and melting polar ice caps. “NASA funded a lot of the research that helped us understand how the climate has changed, and helped us predict the future. The Earth System Observatory will help us answer urgent questions, get a closer look at our atmosphere, and at the surface and subsurface of the Earth so we can respond to those changes. We also expect to have significant private industry involvement. When private companies create or field their own systems, we often use their data to augment our own research,” said Dr. Karen Germain, Director of NASA’s Earth Science Division. 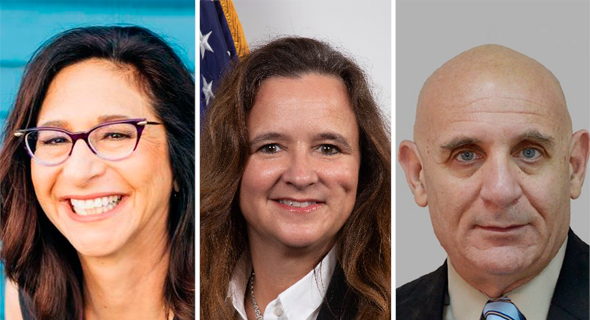 From right to left: Ben-Dor, Germain, and Donoviel. Photo: PR

The vantage point from space is particularly crucial in that regard. “Space is a vital area; our data can’t be observed any other way. If you want to study how polar ice caps are melting, you can observe it from space,” said Francesco Longo, Head of the Earth Observation Division of the Italian Space Agency, who is working on understanding satellite data sets to probe melting glaciers in Greenland, the Arctic, and Antarctic. “Using L-band SAR is key to helping interpet that data, and study environmental degradation and deforestation. We have terabytes of data that we want to transform to predict environmental changes.” Using hyperspectral remote-sensing technology is how those data sets are captured, recalled Prof. Eyal Ben-Dor of Tel Aviv University, “it can show soil degradation based on fire events, or how much dust is in the atmosphere, enable surface detection, and monitor water filtration rate based on soil profiles. We’re building lightweight CubeSats equipped with hyperspectral sensors that can help calculate environmental issues.” And to that effect, Israeli startups can also come into play. Predicting the weather is something that affects humans on a day-to-day basis. Tomorrow.io is an Israeli weather-intelligence startup that recently raised $200 million in capital, and has contracts with NASA, NOAA, and the U.S. Air Force. Its platform relies on a constellation of commercial weather radar satellites, which can measure atmospheric parameters such as precipitation, and improve lives on Earth. Ensuring food security Food security is fast becoming another pressing issue. Aleph Farms is an Israeli foodtech startup, whose use can be applied in space too. It is attempting to create cultivated meat from bovine cells to reduce climate concerns. In fact, it is sending a version of its bovine cells which Stibbe will attempt to grow in space. Dr. Dorit Donoviel, Associate Professor at the Center for Space Medicine at Baylor College discussed how her research is looking into making human life sustainable on other planets. “Living in such an extreme environment that wants to kill you - with its lack of gravity, extreme isolation, CO2 build-up, distance from Earth, and harmful radiation sounds impossible.” Her team is probing how to activate genes to induce astronauts into a potential long-term hibernation to cut back on food needed for longer term missions, such as to Mars, which could take up to seven months. And that isn’t as far-fetched as it sounds. She cited the Chilean mining accident in 2010, where miners survived 70 days underground, and how her team is trying to manipulate hibernation genes present in squirrels for the human body. Growing vegetables in space is also possible, explained Ralph Fritsche, who serves as Senior Project Manager for Space Crop Production in Support of Deep Space Exploration at NASA. “We want to create fresh food in space packed with vitamins and minerals, so that we can cut down on resupply missions. A lot of effort goes into growing those plants, since it’s very hard to deliver water to roots under microgravity.” So far, NASA has managed to grow a variety of lettuce, cabbage, and peppers onboard the station. 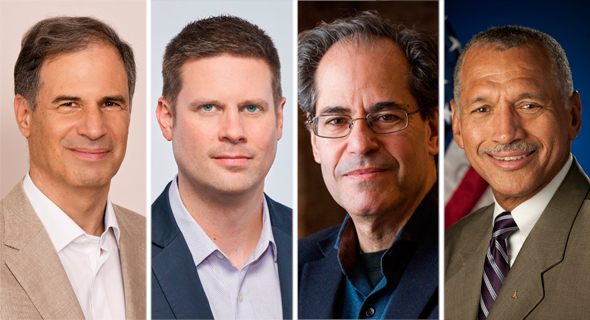 Co-existence in space is crucial On a humanistic note, former NASA head administrator Charles Bolden recalled that despite the lack of “law,” unfriendly countries can learn to co-exist in space. “We are dependent on space, and need to make it available for everyone. We need to guard each nation’s capability that allows it to thrive. The difference between space and any other battlefield, is that kinetic activity in space means destruction for everybody,” he said, and cited the most recent episode where the Russian military used a ground-based ASAT to destroy a dead Soviet-era space satellite, Kosmos 1408. And that message applies to all governments, noted Jeffrey Manber, CEO of NanoRacks, which has helped send over 50 Israeli payloads to space. “Space is a normal place to do business, and we’re doing it one step at a time. There was a lot of fanfare when the Trump Administration created the U.S. Space Force, but we’re seeing other countries do it as well. We need an international court, so there are zones just like with military airspace in aviation.”