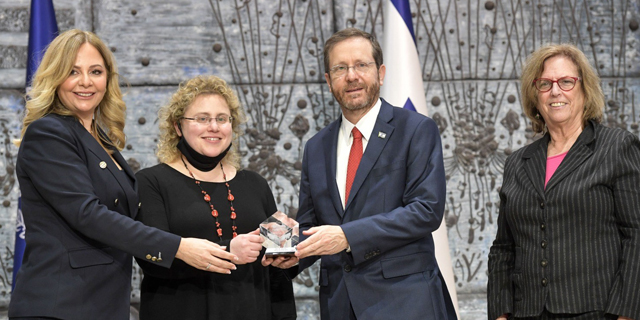 The scholarships are designed to assist scientists in their field of research, thus setting an example of the struggle for equal opportunity and inspiration for many women

Three groundbreaking female Israeli scientists received the Na’amat Prize this week, which included a special scholarship. Out of 45 nominations, Prof. Beena Kalisky from the Department of Physics and the Center for Nanotechnology at Bar Ilan University won the main scholarship of NIS 100,000 (approximately $31,400) and two other scientists received a commendation: Prof. Shiri Artstein, Head of the Department of Theoretical Mathematics at Tel Aviv University, and Dr. Yonit Hochberg of the Racah Institute of Physics at the Hebrew University.

The scholarships are designed to assist scientists in their field of research, thus setting an example of the struggle for equal opportunity and inspiration for many women. The two unique criteria for receiving the award were women who chose a profession in which there is a female minority as well as women in the middle of their careers - so they have many more years of work and leadership and are close enough to the start of their careers to set an example for many women just getting started. Women in Israel constitute a majority, 54%, of doctoral recipients but the number of women conducting research at universities in the highest ranks and in senior positions is significantly lower.

Prof. Beena Kalisky is a world-renowned pioneering physicist from the Department of Physics at Bar Ilan University. She has developed, among other things, the most sensitive sensor for magnetic fields that exists today that can sense individual magnetic nanoparticles, and even the magnetic field of a single electron. At the same time, Prof. Kaliski is leading a broad move to integrate women in science and academia, while removing physical and mental barriers for them.

Prof. Shiri Artstein from the Department of Conceptual Mathematics at Tel Aviv University, a field that has been considered male dominant, until recently was the only female faculty member among 50. She founded the TWIM organization for the advancement of women in the worlds of mathematics, which has already brought for the first time two more women to the mathematics department she leads. Its groundbreaking achievements include solving problems related to the behavior of probability spaces, problems of functions of certain types, and of bodies in multidimensional spaces.

The research of Dr. Yonit Hochberg of the Racah Institute of Physics at the Hebrew University focuses on the search for dark matter, i.e. an explanation for the phenomenon of gravity which is not explained by observable materials. Dr. Hochberg's groundbreaking work on this subject includes both theoretical models and proposals for a new type of detector that can detect dark matter with diverse properties. Dr. Hochberg herself broke glass ceilings in her research advancement in a profession where there are a minority of women in a way that necessitated day-to-day coping during which she was sometimes required to prove herself more than others. At the same time, she works around the clock to promote women scientists in the field of physics, which is also considered a very male dominated field.

At a ceremony attended by Israel’s President Yitzhak Herzog and his wife Michal, the president said: "Today, you (Na’amat) are the largest women's organization in Israel. An organization that over the years has grown large and produced great Zionist leadership, including one prime minister named Golda Meir. You represent outstanding research along with groundbreaking and inspiring work.”

Na’amat Chairperson Hagit Peer: "As part of the Na'amat movement's vision to promote gender equality, we see paramount importance in promoting higher education among women and encouraging their integration and advancement in academia. However, the number of women researchers in universities at the highest levels and in senior positions is significantly lower, which is why Na'amat initiated scholarships about 17 years ago, an initiative that continues to expand in recent years."