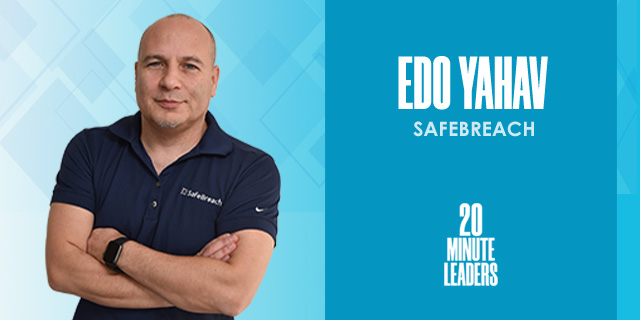 “We try to think as hackers do in order to assess the completeness of your security solution.”

Computers have fascinated Edo Yahav, vice president of R&D and general manager Israel at SafeBreach, since he was in middle school.

Computers have fascinated Edo Yahav, vice president of R&D and general manager Israel at SafeBreach, since he was in middle school. But through his career, he has cultivated a passion for people and using his leadership positions to help others grow and find what’s important to them. Yahav’s current aim is to have gender equality on the team in Israel because he believes the company will be better with more women employed. A key leadership lesson he’s learned is getting a team to work together on a common goal. When everyone understands where they are heading, he explains, they easily join forces, which makes his job easier. Yahav shares that at SafeBreach, each member of the team gets to participate in the entire process as the company tests clients’ security systems to see how well protected they are. Each employee understands the goal and wants to help the customer.

Did you know it was your calling to be an R&D leader?

I don't know if calling is the word. But it's something I really aspired for. It's something I really enjoy doing. I'm a firm believer that people should really do what they enjoy. Anything that gives you a spark and gets you going in the morning. I've been really fortunate to have that through most of my career.

At the beginning, obviously, there were small development positions. Then I started to expand, becoming more of a technical owner in areas. Then I realized that I want to be part of the leadership. After I left the army, I joined startups. It was really much easier to make an impact in a smaller startup. But then, I decided that I wanted to taste big corporate. I joined Microsoft.

You learn a lot: your whole perspective about what it means to lead and what it means to own your deliveries, and getting to a point where you really help people grow. It's something that I really liked doing: mentoring people, helping people grow, and helping them focus on what they want to achieve in life and what's important to them. Aside from the technology, which is important and fun, it's really people. 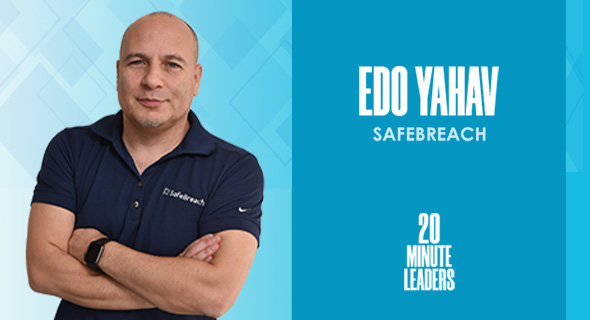 Share with me about your thesis and managerial style as an R&D manager.

I do believe that you have to be part of the way people work. Let's say that we have a meeting. I try not to be the one really running it, but I want to have everyone owning the meeting. It's really important though, in meetings, to have a set goal. If you make meetings short, precise, and to the point, then it gets to be much less of a hassle and more of a way to get things done.

I help organize and make sure that things are happening. But if I'm the only one talking in a meeting, then that's a bad meeting. Once you have everyone collaborating and working together toward a goal—and it doesn't have to be only in a meeting—then it's easy for everyone to really join forces and become one organized group. That makes my job easier, so that's what I strive for.

The challenge starts before you have the team. What is happening today?

It's really hard to get people on board. What we want is people who see our culture, our belief, and our goals and they want to join in. It's really difficult because there's a lot of buzz around everything in the high-tech space.

To me, the most important aspect is not really being addressed: gender equality. Having 50% women in our Israeli site is extremely important to me. This is something that we've set as a goal, me and our head of HR. We have more than the average here in SafeBreach. But we want to strive for more. We're really putting a lot of effort into getting that done and becoming attractive for everyone.

How do you proactively go about doing that?

We start by, one, making sure that the way we talk and the way we address people is in the realm of gender equality. We try not to create job descriptions that are more male-oriented. We say almost every week within SafeBreach, "Bring your friends. If they're female, then that's even better."

We try to reach out to specific women groups. We try to have our female employees really involved to try to bring in others. I think it's something that they see as an opportunity to bring more gender equality into the office and get us to a better place. I do believe that once we get into a more equal area, then we're really going to be a better company.

It's something that we have been trying to scratch our heads and figure out the best ways to do this. It's something that you need to work hard on. You need to make sure that when people scan for CVs, they don't bring in people that they think are more like them only. We want a very diverse society here in SafeBreach. I believe it's going to make us much, much better.

If you're putting yourself in the shoes of those considering where to go, where is the differentiation really taking place?

SafeBreach is really in a unique position. We are a company that's really been selling to the highest companies out there. What we do is we help everyone in the company become part of that process. We have engineers helping sales or being part of sales processes or customer success. The entire customer journey is something that our engineers are part of.

We've got the same goal and we can talk about what SafeBreach does, but once everyone understands what SafeBreach does, then everyone just wants to make that happen. They can come up with ideas on how to better help customers, which features are going to be relevant there, and what technologies to use. The entire journey is really in the hands of our engineers.

In a small startup, you don't see these kinds of customers. In large companies, you usually don't have that much of an impact. We're really in a unique position to offer both. And that's on top of the usual top technological stack and all of that. At the end of the day, the differentiation, in my mind, comes from what you do and how you impact everything around you. That's why SafeBreach is an amazing place.

What is SafeBreach's mission in the world? Where are you positioned today?

An area called breach and attack simulations was formed mainly by SafeBreach's founders. This is an extremely important area in which companies understand what's going on in their security ecosystem.

For example, CSOs all around the world receive a lot of money to purchase a lot of software to make their companies not susceptible to attack. But when something goes wrong in the world, when they are asked, "Are we in the clear? Are we okay?", they don't know for sure.

That's where we come in. We actually do the tests, do the entire scenario. We try to think as hackers do in order to assess the completeness of your solution. There are several layers. One is we try to figure out whether it's possible to do any type of attack. There's another area of figuring out whether what you purchased in order to stop those types of attacks from happening has been configured correctly.

When you look at the outputs of what we do, you have a complete, more holistic idea of where you are. You can decide what you want to do with that information. But it's something that you need to be aware of once you install all of your network securities and other security measures. Right now, what they do is they install it. They configure it. It's supposed to be doing what they thought it would do. But it's hope. Hope's not really a strategy. At the end of the day, you really need to know. We provide you with that information.

There's one really important thing that SafeBreach does really, really well: the ability to respond to ongoing threats that come in all the time. We have an SLA of 24 hours. Our amazing researchers come in, assess the information, and are able to use our proprietary technology in order to provide customers with the relevant playbooks.

In middle school, what were you curious about?

Computers. These are such versatile instruments. They allow you to do so much. It was really fascinating to me.