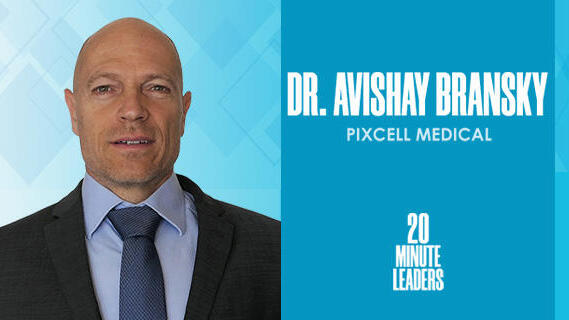 An accidental discovery in his blood cell research was a remarkable find for Avishay Bransky, co-founder and CEO of PixCell Medical.

An accidental discovery in his blood cell research was a remarkable find for Avishay Bransky, co-founder and CEO of PixCell Medical. He shares that it took several months for him to realize the applications of this discovery. Even after that, it took ten years of R&D for him and his team to create a product around the discovery, something few people accomplish. Bransky explains that many new technologies had to be created around the phenomenon they found. He couldn’t rest until all the obstacles were removed, and now PixCell’s disposable blood test is being used in remote areas of the world where there is no access to lab tests. Bransky also sees applications for their test in more developed areas as consumers want to be able to keep an eye on their health at home. He advises entrepreneurs to push through obstacles to reach their goals.

Tell me about your university years. What guided you academically and into the entrepreneurial world?

I always liked physics, so I studied physics and materials engineering in the Technion. Then I went to work at Elscint, which is one of the first high tech companies in Israel. Then I was very much attracted to software engineering, so I went back to the Technion and studied computer science and worked at Qualcomm.

But I felt that I wanted to have a better understanding, more multidisciplinary education, so I got back to the Technion and did my PhD in biomedical engineering. I also did my postdoc there. I mostly researched microfluidics and microelectronics. That’s where we discovered this unique phenomenon, which PixCell Medical Technology is based upon.

Eventually, we recognized the fact that all the cells were perfectly in focus in a single plane, and our microscope was focused in another position so we didn't see the cells. This later on was termed "viscoelastic focusing," which is a new physical phenomenon that causes particles or cells to perfectly align into a single layer plane.

This was remarkable, but it took me several months to understand that this could be very helpful in many applications where cells are analyzed and counted. Most analyzers that count cells need all the cells to be perfectly focused in order to be able to measure them and analyze them. But this unique phenomenon is superior to all proceeding methods. It yields better results and a better measurement.

Walk me through from the discovery to understanding how this can be used in the real world. How do you know what to do with this innovation that you've just created?

The main advantage of our technology is that it enables development and manufacturing of very simple and inexpensive disposables. It makes the test much more accessible. If you use the traditional techniques, you'll end up with very large and complex instruments that reside only in labs. Using viscoelastic focusing, you can use very simple, inexpensive plastic disposables and attain the same level and even better levels of focusing.

When you discover a specific phenomenon, you need to innovate a lot around this basic science phenomenon. There's a lot of technology that needs to surround it in order to really reach a product. It took us over a decade of R&D just to reach the product that we now are commercializing, which has over 30 issued patents.

What's happening in today's world in terms of blood diagnosis? Why is this even an issue that we should care about deeply?

With COVID, the spotlight has been drawn back to diagnostics, whereas diagnostics was pretty much neglected before. The fact that the patients cannot go to the hospitals and they need to be tested near where they live or even at home: all this has now made tremendous growth and interest in quick, simple, accessible diagnostics.

People want to monitor their own health more than previously. The technology is there, so why not make all these important tests more accessible and closer to the patient?

I'm curious about this 10-year journey where you and your team are understanding that you have something meaningful in your hand but you're working on a variety of different technologies around it to commercialize it.

It's a very long journey. Many ups and downs, many challenges, but very satisfying. I think very few people start from a raw, crude idea or discovery and eventually reach a functioning and selling product. We made so many mistakes, and we tried so many different ideas. We have a long list of prototypes that didn't work.

When you start, you think that you know what you're doing and in a year you’ll have a solution, but then you find yourself working on and on. But eventually you solve dozens and dozens of problems that you feel are not solvable.

At PixCell, we have developed a totally new technology. Hematology testing was initially developed in the 1960s, and it still is based on the same principles today. Our product is based on a totally different principle. It is based on machine vision and AI. We use a disposable cartridge, which acts like a small lab. We provide the same results as a full-blown lab instrument—in most cases, more accurately.

As a leader of this organization, how do you react to those moments where it doesn’t seem solvable? What type of leadership do you require to power through them and reach the end of a 10-year journey?

Where's the obsession coming from for you?

I like challenges. When I don't have the solution to them, I just don't rest until I find a solution. I was always like that. It's very satisfying and also very exciting to try and solve a riddle and eventually solve it.

Every time you climb the hill and then you see another hill—sometimes it's a mountain—you don't have time to rest and enjoy your achievement. You see the next challenge, and you just head on to the next challenge.

We won't stop until we reach the point where we see our product all over the world and it is used everywhere. That is really gratifying because it does help people.

We just had an installation in Papua New Guinea, which everybody here was so excited about. That's the first time they're able to test the people over there. Also in Australia, in remote locations that had no access to these very important tests. After so many years, that's very, very gratifying.

How do you think through the impact PixCell could have on the world in accordance with the vision that you're outlining for the company?

We perform the most common blood test, which is the complete blood count. There are almost a billion CBC tests done in the US alone each year, yet there are so many places around the world that do not have access to the full CBC. The CBC is so basic. Making it so simple and accessible would definitely make a large impact.

If you're looking back at yourself 10 years ago as you're making these discoveries and you're starting out, what do you know now that you would tell yourself?