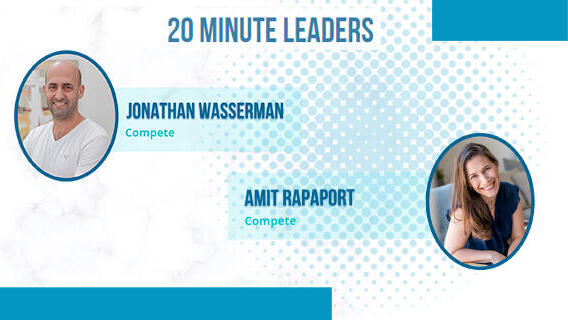 “Entrepreneurship is not lonely here. I always have someone I can trust.”

You might expect a couple starting a company together to hit some bumps in their relationship, but Amit Rapaport and Jonathan Wasserman, co-founders of Compete, share that the process has been good for their marriage.

Though you might expect a couple starting a company together to hit some bumps in their relationship, Amit Rapaport and Jonathan Wasserman, co-founders of Compete, share that the process has been good for their marriage. Wasserman, the CTO, explains that there are benefits to being partners in all aspects of life: they share business and personal goals, and it improves their communication. Rapaport, who is the CEO, shares that the tough times on a startup journey are not as hard when you go through them with someone you fully trust. A company’s big decisions are usually up to the CEO, and Wasserman says their marriage doesn’t change that structure. Rapaport explains that the foundation of their relationship is respect and open communication, and those are key for any couple looking to start a business together. She also advises being bold and authentic with one another to build something successful.

You two are co-founders of Compete, and you're also married. Was this always in the plan that the two of you are going to start a company?

Amit: No. When we met, we were extremely loyal to Nir Zuk. We worked at Palo Alto Networks. It was a dream for both of us to create something just the two of us.

Tell me how the two of you met.

Amit: We met at Palo Alto Networks. Yoni was one of the first engineers at Cyvera, which was acquired by Palo Alto Networks, and I came right after the acquisition to lead the recruitment. I fell in love with this awesome man because he is beyond perfection. When we started dating—

Jonathan: We don't really know when it happened.

Amit: Back then I had two kids of my own, Noam and Omer, so it was quite a change with the relationship. Very fast, very soon. Since then, I'm waking up on a daily basis falling in love.

What made you realize that there was an opportunity to not just work together but actually to build a company together? What was going through your mind as you were starting to talk about this idea?

Jonathan: We never really had doubts because I think that we are a perfect match. We're partners in life, and we're partners in everything. We can't really imagine life without each other. It's also like this in business.

We worked together at Palo Alto, and then Amit left for a competitor. We felt that we wanted to work together again, and we just waited for the opportunity. Building the company together was easy. We knew that it's a joint venture.

At the beginning, how much did you talk about what this means for you as a couple? It's one thing when you're bringing your work home; it's another thing when your co-founder is at home. A lot of the conversation, I guess, naturally tends to be about the company.

Amit: 100%. No, 99% is about Compete, 1% about our three boys. But that is what motivates us so we don't need to fill our lives with the extra. We don't see this as, “Okay, let's have a clear cut separation between our private life.” When you're an entrepreneur, you're fully in this. The understanding is that that's our life.

Jonathan: Actually, it's easier because everything is aligned. We have the same goals, both personal and business goals, so it makes it easier.

What's the best part of working together as a couple?

Jonathan: You always hear about entrepreneurship and how lonely it is, so I don't think that it's lonely here. I always have someone I know I can trust and has my back so it really makes the experience a lot better.

We have the same joy from stuff and we can celebrate everything together. When we worked in other companies, the other side was happy for you, but it's not the same. Here, everything is the same for us.

What is the biggest challenge?

Amit: I know it will sound a bit naive or too good to be true, I think the hard part of being co-founders, it's not (anything) with my co-founder, it's about being a co-founder in an early-stage startup. But with Yoni, it's easy. He's my safe zone; he is the one I trust the most, admire the most.

We disagree from time to time, obviously. We're not the same person. But everything is so respectful. When you trust the person with you, the hard times are just not as hard as described.

Jonathan: It even helps us improve our communication. When you have a business, you communicate a lot more. We need to keep talking all the time to help each other. Everyone has their ups and downs. It's the easiest when Amit is here with me on this journey.

But no relationship is perfect. Conflicts arise, as co-founders or as a couple. How do you make sure that these things don't mix? Or do you let them mix?

Amit: I must disagree. I think that my relationship with Yoni is perfect. I think he improves me. He brings a better version out of me. I consider myself the most fortunate person on the planet.

Jonathan: I don't have enough words like Amit to describe everything.

Amit: It's okay. Your eye speaks.

Was your relationship at any point in time a worrisome feature for investors or talent?

Amit: Now we're post-A, but before we raised the seed, one of the most famous entrepreneurs in Israel said to me, "You're a first time entrepreneur, a female and in HR tech, and you're creating this venture with your husband, so fingers crossed for you for the fundraising." But both in the seed and in the A, it was easy to raise. They had zero concerns about the relationship that we have. At the end of the day, it's all about execution, leadership, vision, the people behind it. When you combine everything together, you see that it's bigger than the founders as husband and wife.

I think that's important for the investors to understand we run a business, we care about Compete, and we care about the customer experience and the innovation. That's the kind of conversation that we're managing.

What tips or insights do you have for couples that are considering starting a business together?

Our relationship is based on trust, and we're fully supportive of each other. We don't have ego. We decided early on she's the CEO, I'm the CTO. I handle all the technical side of the business, she handles all the other parts. I think that maybe expectations and what people want, they need to set this up upfront. But it's really hard to tell because you grow with the business; you change a lot. It improves, but it changes.

There are differences that we're all aware of between the positions. What happens if there's a disagreement about a decision? Usually, the CEO ends up deciding, right?

Jonathan: It's very clear: the CEO takes the decision. The fact that we are married doesn't change the fact that a company should run like this. I completely trust Amit to listen to my opinion. But eventually, it's the CEO's decision. There is no ego here. Eventually, she's the CEO, she is also accountable for this, and I'm accountable for my part.

Amit, what would you tell me if I were to start a company now with my partner? What should I be really cognizant of or intentional about?

Amit: I think the two key ingredients are to be bold together and authentic together. The combination of these two are crucial for success and for building something together. Any conversation that we're having, the infrastructure of everything is respect and open communication. Just make sure that you're in a relationship that has that.

Yoni, you said the CEO needs to make a decision. But then you have similar really big decisions to make in real life and it's not CEO/CTO, it's just two partners that have to come up with a consensus.

Amit: Shall I say that in our private time, you're the CEO?

Jonathan: No, because it's not right. Maybe we are co-CEOs in private. I really don't think that we have this kind of issue. If we have disagreements, it's only about big things and we work it out like you do in the business.