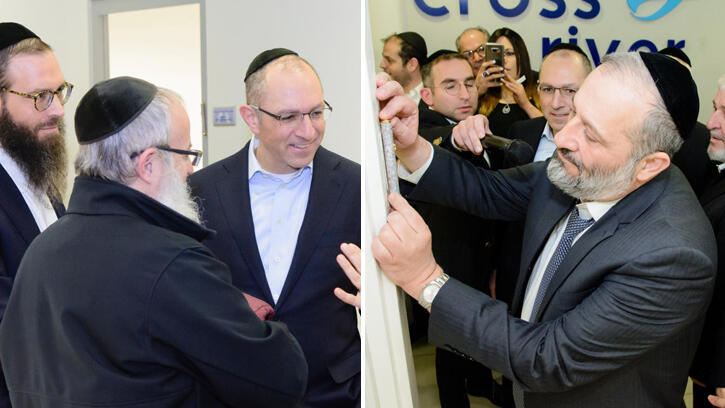 Passions, theft and a $31 million lawsuit: What happens when a client drains a company of its 126 employees

Jerusalem-based Brix Software seemed to have a prosperous partnership with New Jersey-based Cross River Bank, that was until a zoom call last December in which the bank’s founder convinced all of Brix’s employees to join his company instead

March 2019: The then Interior Minister, Shas party chairman Aryeh Deri, MK Uri Maklev of United Torah Judaism, Rabbi of the Western Wall Shmuel Rabinowitz, senior officials of the Jerusalem municipality and the ultra-Orthodox community in the capital gather at Har Hotzvim. The event: The inauguration of the new offices of Brix Software, owned by the Jerusalem-based entrepreneur Ilan Grobman. The company, founded in 2018, soon signed a strategic commercial agreement: to provide software services to a small bank in New Jersey, Cross River Bank, which was founded and run by an ultra-Orthodox Jew named Gilles Gade.

The speakers, led by Deri, who affixed a mezuzah on the office door, stressed the importance of the presence of the software company in the Capital, which employs many ultra-Orthodox women, while Gade praised the partnership with Brix "which has been important to our growth and will be a key factor in our continued expansion and success."

However, three years later, this "partnership" has turned into a fierce legal battle currently taking place in the Tel Aviv District Court, involving an astonishing story which occurred last Hanukkah Eve. After several months of contact with Brix for the purpose of its acquisition and assimilation of its services within the Bank's operations, disputes emerged over the value at which the transaction would be carried out. Then, according to the lawsuit filed by Brix, the bank initiated an “illicit and bullish” move to take over the operations and employees of the company from Mount Hotzvim. 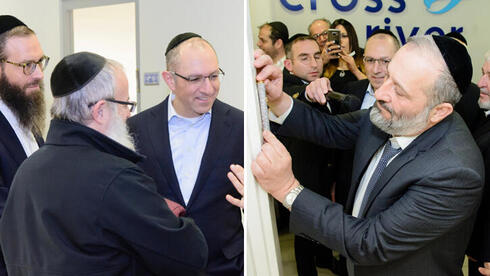 In December 2021, Gade, founder of the U.S. Bank, attended a Zoom call with all 126 Brix software employees and wished them "Happy Hanukkah" in Hebrew, then announced that he had good news: "Secret Santa Claus has brought a Hanukkah gift." He suggested that all employees leave Brix immediately and switch to work for a bank subsidiary that would provide the same services. The "Hanukkah gift" he offered included improved salaries and terms, special bonuses, bank shares and full indemnification from claims by Brix. It was further alleged in the lawsuit that employees received a message stating that due to the dispute between the bank and Brix, the future of the company was in doubt.

Indeed, within a few days, in mid-December, all but two of the Brix employees, the CEO and CFO, left the company and moved to a new dedicated company established by the Bank in Israel, CRB. They left behind uniform letters of resignation stating that they were forced to resign following information given to them that Brix would cease to exist in the near future.

Now, through attorneys Gideon Weinbaum, Ron Abelski and Yoav Hertman of Epstein Rosenblum Maoz (ERM) law firm and Pearl Cohen law firm, Brix and Grobman have filed a NIS 100 million (approximately $31 million) lawsuit against Gade, the U.S. Bank and the company that recruited the workers, alleging "theft of employees, theft of equipment, theft of files and documents, the diversion of employees through flagrant lies” and other allegations that amount to a central claim of "poaching” employees and emptying Brix of all its assets to bring about its dissolution.

The background for the establishment of Brix is ​​Cross River's desire to employ in Israel, by way of outsourcing, software developers who will provide services which the bank requires. The owner and chairman of the Bank Gade had then turned to his friend in Israel Grobman and offered to personally take on the project. In October 2018, Brix and the Bank signed an agreement under which the Israeli company will provide the Bank with research and development services in the field of financial technology in exchange for an advanced quarterly payment for the value of all expected quarterly expenses plus a profit of 7%.

Brix recruited and trained employees, and in recent years has provided services that have led to the growth of the small bank from New Jersey. Among other things, it developed banking products and algorithms for risk management and information security, special mobile applications and a variety of other developments. Gade was pleased and later told Brix employees that the bank owed 100% of its success to operations in Israel.

Negotiations began in 2020, in which the bank planned to acquire Brix and merge its activities. Draft agreements were exchanged between the parties, but in early 2021 negotiations were halted. Contact was renewed in mid-2021, according to Brix, based on the bank's intention to embark on a major round of fundraising in the U.S. capital market ahead of a planned IPO. Brix claims that "the bank understood that in order to maximize revenue from the planned round of fundraising and issuance, it would be very profitable for it to acquire Brix's activity, since the fintech revenue multiple is significantly larger than a bank revenue multiple."

Brix claims in the lawsuit that in the renewed negotiations it was agreed that the purchase would be made at a "fair market" price, and the parties agreeingly turned to a company to give an estimated appraisal of Brix, and a price tag of NIS 61.5 million was then set.

The lawsuit stated that the bank, contrary to the earlier agreement, did not accept this estimate, and appointed appraisers on its behalf who determined that the value was significantly lower, about NIS 20 million. Simultaneously, the bank sent Brix a cancellation notice for the development contract from the end of 2021.

According to Brix, Gade and the bank had in effect planned behind its back an "illicit and bullish” move designed to make almost all of Brix's employees defect to work directly for the bank in the designated subsidiary established in Israel. The bank caused the employees to blatantly violate their employment agreements … and blatantly violated the development contract itself.”

This move, the lawsuit alleges, became public on December 5, 2021, on the Eve of Hanukkah, when Gade convened all Brix employees for the same Zoom call, also known as the "solicitation speech," in which he suggested employees defect to CRB on improved terms. Afterwards the bank sent Brix employees a question-and-answer file regarding the possibility of their defection and continued to "apply tremendous pressure on Brix employees to resign, including spreading false information that Brix was about to close."

As part of this move, the lawsuit alleges, the bank refused to transfer to Brix the payment for December, and the company was forced to pay employees salaries from accrued employee bonus sums, allegedly in order "to prevent Brix from paying employees the bonus and thus incentivize them to leave."

The employees did in fact resign and defect to the bank's subsidiary. Brix rushed to ask the district court for a preliminary injunction to prevent the move. The court sent the parties to mediation and in the meantime they decided on a ceasefire, but according to Brix, the mediation (which later failed) was deployed by the bank to "buy time and establish a reality" to "paralyze” and complete its "illicit and bullish" takeover of Brix. It was alleged, among other things, that the bank ordered Brix employees to disconnect the security cameras at the company's offices, and to take equipment, computers and documents to transfer them to CRB.

According to Brix, they were in fact the victim of a scam at the hands of the bank they term a "forceful and powerful hijacking designed to save the bank from the need to pay even one dollar for the purchase" - while blatantly disregarding basic business norms and completely ignoring contractual obligations.

On the other hand, the bank and its subsidiary CRB presented a completely different picture, through the law firm Fischer Behar, in their response to the court. According to them, Brix was established to meet the needs of the subsidiary in Israel for a temporary period and with its full financing, and with the parties agreeing in advance that after the bank were to receive regulatory approval from U.S. authorities to operate a subsidiary in Israel, the contract between the parties would be terminated.

It was further alleged that, according to the agreement between them, the entire intellectual property generated during the provision of Brix's services to the bank (algorithms, technical data, trademarks, etc.) belonged to CRB - and therefore all allegations of theft and seizure were refuted, while the computers and equipment taken had been returned. In addition, the bank contends that Brix's assertion that the bank undertook to purchase it at "market value" is a "clearly devoid claim which has distorted the facts."