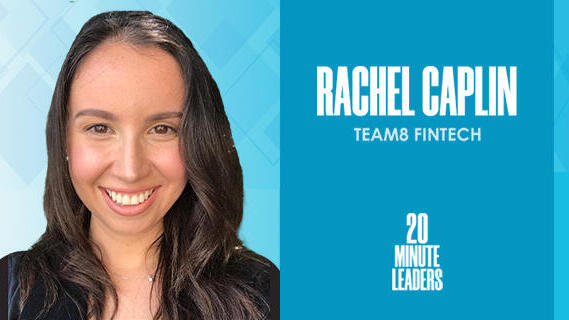 “From a young age, it was very clear to me that nothing would stand in my way.”

While Team8's Rachel Caplin likes to have a plan, she recognizes that some of life’s magical moments have happened when she went with the flow.

While Rachel Caplin likes to have a plan, she recognizes that some of life’s magical moments have happened when she went with the flow. She is now the business development director for FinTech at Team8, but after high school, her plan was law school. Once she got there and realized it wasn’t for her, she was flexible enough to change her plan. After growing up in Australia, Caplin made aliyah more than six years ago. She shares that she recently realized how creative she had to be as an immigrant and how that out-of-the-box thinking has been part of her entire journey. By joining a network for immigrants, she explains that she discovered the power in finding people with similar shared experiences. While the process of leaving Australia and getting plugged into the high tech ecosystem has involved challenges, Caplin says she always knew that nothing would stand in her way.

Tell me a little bit about yourself and your life journey.

I was born and raised in Perth, in Western Australia. I made aliyah about six and a half years ago. I found myself not only overwhelmed and ready to build a new life in a new country, but I became completely fascinated by the whole startup and innovation scene. I now lead business development for FinTech at Team8, one of Israel's leading venture groups.

Beyond that, I am married to Eitan. We have a two-year-old daughter. I'm almost 35 weeks pregnant. On the side, there are all sorts of other things that have been really interesting chapters and part of the journey to getting here. I wrote a book, which was a bit of a happy accident. I represented Israel in netball, which is kind of like basketball. In 2022, 2021, I've come to terms with what the experience of being an immigrant really has been for me. There are lots of different pieces that have brought me here.

Is there some string that connects these different experiences to who Rachel is as a person?

It was actually in some feedback that I received at Team8 quite recently that I had a light bulb moment: creativity really underscores a lot of the various chapters of my life. I never thought of myself as a creative person because I'm not artistic or musical. I've come to redefine and understand what creativity actually is. If I look at the different tracks that come together, there's a capability to think creatively sometimes because there's not much of a choice.

I can give a couple of examples. I grew up in a country where sport was like the religion. I played netball at a competitive level growing up. But I was never the tallest, fastest, or strongest. If I was to get the ball first, I had to be creative. And I only realized this later on, that in many ways, being an immigrant is the same thing. When you land on your feet, you have no choice but to be creative. You can't leverage the networks you have from the army when you didn't do the army. You can't leverage the language when it's not your mother tongue. There are so many moments as an immigrant where you simply have to think out of the box because there's not much of a choice. With time, I've come to see that Israel is really the same. So much of the innovation here, to me, is a product of the geopolitical circumstances, no natural resources: what choice did Israel have but to become creative? 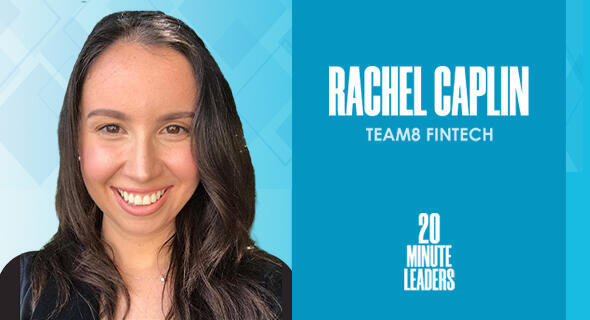 It sounds a lot like you've positioned yourself at the underdog position, time and time again. What is it that drives you when you realize you don't have the leverage?

The pursuit of excellence is something that was ingrained in me from a young age. It really comes from inside. From a young age, it was very clear to me that nothing would stand in my way. I was capable of whatever I wanted to do. For example, I've actually got a stutter. I think back to high school when I was on the debating team: it was almost specifically because of that challenge that I felt the need to really prove to myself that I could. If someone came to me and said, "This is your life at age 30," I'd be really happy. I think that in building that, I get a sense of satisfaction that really validates a lot of the decisions that I've made.

What are some fundamental things that you take with you that will help you succeed in whatever you do?

I've been grappling with this question very recently. I wrote a book, which was an accident. My grandma passed away four years ago, and when I came back to Israel, I was overcome with this sense of "no one here knows her.” That's where the writing helped. Every time the grief hit, I went to write. I had zero intention to show it to anyone. My husband said, "Why don't you show it to a few friends?" It was the feedback from that that really said, "Maybe I've got something here." Just last week, I found out I was shortlisted for the Vogel Award, which in Australia, is this top book award for a manuscript.

I'm someone who's very organized and I like to plan, but sometimes the most magical things happen when you just go with the flow. That's not always easy for people who are more type A. That is really the message that I take into whatever comes next. Sometimes you can't plan and maybe that's going to be the most magical part.

We are taught that planning is important, and it sounds like this is something that perhaps is less apparent with you. Do you plan?

No, you are a hundred percent right. Certain examples are coming up. I got into law school out of high school, which was the prestigious place to go in Perth. I remember on day one sitting there, thinking, "What am I doing here? How am I going to tell my Jewish parents that I don't want to do law?" I called up my mom, and I said, "What do you think if I don't do law?" She said, "Oh, thank God. I don't know what you were thinking." You can plan as much as you like, but you often don't know until you get there. There's a natural instinct that I have to want to plan and organize everything. But I think what I have been able to hone is that while I've always had a plan, I've always been flexible when that plan changes. It's good to have a compass, but be flexible enough that if something changes, go with it.

What it also sounds like is that your path is one that optimizes for lack of regret.

I think it's Jeff Bezos who talks about regret minimization as a strategy. I don't think about regrets nearly as much as he does, but he and I are in different places in life.

I really genuinely believe that you can't go back and change any decisions that you make, large or small, and think that you know what would have happened. There's this butterfly effect of the chain reaction. You can't then map out what would have happened differently. I come from a very slow-paced, very wide-open spaces, opposite of Israel place, and you can never predict that you're going to actually feel more at home in the hustle and bustle and the impatience and the crowdedness of a different place.

I feel that being very open to these opportunities and changing passions impacts the people around me. I have to be conscious of how these changes impact relationships I've been building. Do you feel that it has any impact on your life?

Joining a community that's part of the Nevo Network has really built a new sense of community that I don't feel that I had before. I hadn't really given much time to think about a lot of the experiences that I'd had, particularly as an immigrant, until this program.

It's through connecting with this group of like-minded Olim, other immigrants working in high-tech, that I've come to understand how powerful it is to be around like-minded people and understanding the commonality that you can have with people over a similar shared experience. You can really feel that they're evolving with you. I found it very powerful and empowering to be able to connect with other people who had been doing that in their own way, but with a common thread of that experience of having left things behind.